November 01, 2017
a friend sent me this hilarious image, which illustrates why english is really a bullshit language: 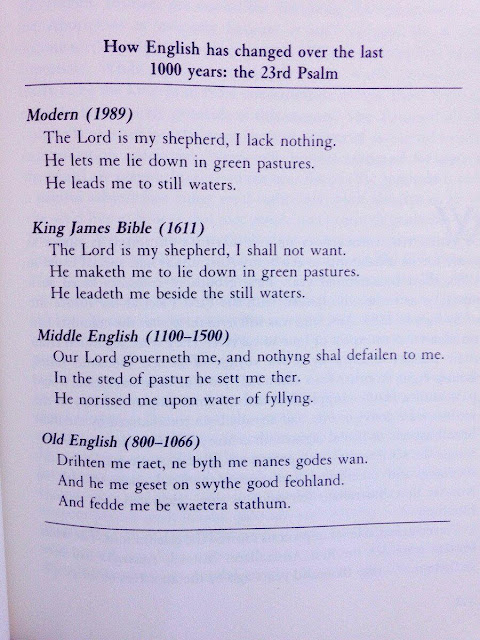 ok, all languages evolve, and you really don't have to go back that far with most of them before you don't know what they're talking about, but really, if it weren't for the fact that the above languages were spoken in the same territories, would you say they were the same? [smarter people than you say they are -ed.]

but, as i look at the picture, a dark cloud descends upon me. aside from the change in language, it seems that god himself has undergone a pretty significant change.

i'm not versed in old english, but i am reasonably well-versed in the others, and it seems that the middle english and king james version are pretty close to one another. the middle english christian was nourished by the waters, whereas, by the seventeenth century, god was just leading people to them and, presumably, going to collect some more.

but in the middle and king james versions, it's clear that god makes people to lie down in the splendour of the green pastures. in the modern version, he lets them do so. no longer is relaxation and contemplation the purpose of human life. by 1989, those things are privileges.

furthermore, the middle and king james versions both indicate that christians shall not want for anything- that's what god has promised them. that was a load of hooey even at the time, because plenty of people were in want of even basic things, but it holds out the promise that it's god's plan that they should not want for anything. [note: that doesn't mean that they would have everything that they wanted, only that they would not be "in want", i.e., of those things that were necessary.]

in the modern version, that is altered so that it is a statement of present fact: i lack nothing. it no longer matters what god's plan is. the person who says the prayer in modern language is saying that they are fine the way they are, which is ridiculous, since there are millions of christians in varying states of deprivation.

i'm not in touch with god, at least not unless i skip my medication for a few days [and even then, it's dicey], but perhaps someone who is could enlighten us all as to how come he's snuck these lousy changes to the agreement in. because in the absence of evidence to the contrary, it almost looks like the people translating/ transcribing the bible altered it to reflect the shift in morality that occurred in the industrial revolution, where those in power insisted that people should be happy with what they were given, no matter how little it was, and should consider themselves lucky not to have less.

personally, i think that god might want to have a word with his admin staff.