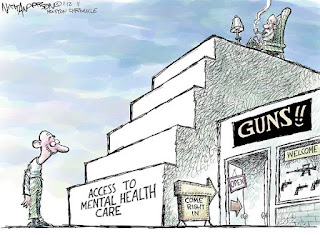 i haven't done a mental health mondays post in a while, owing mostly to the fact that i felt like i didn't have enough time to properly research issues, which left me repeating a lot of what i'd already covered. but, as usually happens when i take a break, i end up seeing so many articles that inspire me that i get filled to the point of bursting and, eventually, this series gets resurrected. am i going to be able to continue this regularly? we shall see. but for the moment, i just had to say something.

as you might have guessed from the title, this post was inspired by the horrific mass shooting in texas, which already makes me feel like i'm repeating myself, because every time there's a massacre of this sort, politicians start trotting out mental illness as the main factor, in an attempt to avoid talking about gun control.

this time, however, the landscape is a little different, because the man in charge of policy making started his time in office by repealing legislation that had only just been passed, that would have placed greater restrictions on the ability of people diagnosed with mental illness to purchase firearms. some have argued, including the unlikely duo of the national rifle association and the american civil liberties union, that the legislation was flawed to begin with, predicated on the belief that gun ownership is an important right. [and, depending on your reading of the american constitution, you could say that it is.] but let's be clear: the legislation affected only those whose mental illness was severe enough that they were receiving social security benefits because they were unable to work and were also ill enough that they were incapable of managing their own benefits and therefore had a duly appointed agent to do so. the rule affected about 81,000 people in total, and only about 9% of the total population receiving disability benefits, and those who were affected by it had the opportunity to appeal the restrictions placed on them. opponents of the legislation argued that it laid the groundwork for potentially expanding the restrictions to the 25% of the population who experience some level of mental illness at some point in their lives. in my opinion, that's a substantial reach, given the power of the gun lobby and the conservative constitutionalist composition of the supreme court. but let's say that it is not impossible.

the argument against restricting gun ownership for the mentally ill is that they are not any more prone to violence than healthy people, and are actually more likely to be the victims of violence. by that logic, it makes sense that they should have access to guns to protect themselves, right? you must be kidding. the dirty little secret of america's ungodly high firearm death rate is that two-thirds, more than 20,000 a year, are suicides. politicians can speculate all they want about how mass shooters are mentally ill, but the literal and figurative juries is still out on whether or not they meet the clinical or even legal thresholds for mental illness. people who commit or attempt suicide [and it comes as no surprise that those who use guns to do so have a much higher fatality rate than those who use other means] are almost assuredly suffering from a mental illness. on this issue, the statistics are unequivocal: a mentally ill person is hundreds of times more likely to use the gun on themselves than on others, meaning that allowing seriously ill people access to guns is almost tantamount to helping them end their lives.

but that's not all: many people with mental illnesses suffer from those illnesses because they have a history of being abused. and those with a history of abuse are actually more likely to become abusers themselves, having "normalised" violence as their brain developed. and remember what i said earlier about people with mental illness being more likely to be victims of violence? the feelings of suspicion and fear associated with that increased vulnerability may itself be a catalyst for violence. now compound that with the fact that mentally ill people are more likely to live a peripatetic existence- homeless, imprisoned, isolated- than healthy people. what emerges is a portrait of people who are trapped in a constant cycle of fight-or-flight, life-or-death stress.

and that brings me to the point that i fall back on as a person who suffers from compound mental disorders: we make really bad decisions. i like to think that i'm a pretty rational person, but i know perfectly well that i can fall into traps of avoiding work because i feel like the people i work with are out to get me and drive me right off the deep end [even now that i'm working from home], or finding it necessary to make outlandish purchases, or needing to acquire an entire set of items rather than just one, or none at all, or feeling weirdly compelled to see what it would be like to jump off my balcony. and not one of those things is as likely to be lethal as shooting myself in the head. i fully believe that one of the reasons i'm still alive is because i haven't had access to a gun. i can't count the number of times when i've felt so panicked and hopeless that i would have used one. the bottom line is that this sort of paranoid, feedback loop decisions can lead to suicide or homicide in its extreme forms. [far more likely the former.]

to return to the earlier question of how far the restriction on gun ownership could be taken, if it could feasibly be extended to a quarter of the population; so what? the american founding fathers did not intend for crazy people to have guns. it's right there in the second amendment: "a well-regulated militia". it's the first fucking words. although it might not have been something they had in mind specifically, mental health research being in its infancy or less at the time, one thing that we can likely agree on is that people with serious mental disorders are not capable on their own of being "well-regulated". their irregularities run deep, and they would not fare well in the kind of organisation that the second amendment was meant to encourage. i've said for years that i just don't get the gun culture of america, and it remains one of the truest statements i've ever made. but i do get mental illness, and i think that what we understand about it now raises an argument that the severely mentally ill were never meant to be included in the second amendment, and that encouraging lawmakers to include them now puts them at a highly increased risk.

tl;dr :: if people in positions of power want to trot out mental illness every time there's a mass murder in the united states, we should insist that they use all the available data to inform their decision making. and that data tells us that both the mentally ill and the general population would be safer if they not only implemented the limp regulations that obama was able to squeeze through, but if those regulations were tightened to make sure that the people who got guns were people who were capable of safely evaluating how to use them.