i don't know why, perhaps because i'm starting to worry that the end of the world is nigh, but i found myself thinking about this verse earlier in the week:

Some say the world will end in fire,
Some say in ice.
From what I’ve tasted of desire
I hold with those who favor fire.
But if it had to perish twice,
I think I know enough of hate
To say that for destruction ice
Is also great
And would suffice.

i've always held robert frost at a bit of a distance, although i do love "stopping by woods on a snowy evening" and especially "acquainted with the night". [no self-respecting insomniac can exist without loving that poem. if you don't, you're an insomnia dilettante.] but there's something about the short piece above that strikes me as a kind of saying, like "a stitch in time makes nine", except that it makes more sense. it's almost too short to be a poem, and falls closer to the part of an axiom.

how we get from robert frost to makeup is really anyone's guess. the leap happened in my brain and even i don't know how it happened. but happen it did, and so i created two looks, each inspired by one of those paths to the end of the world. 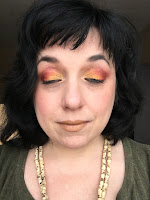 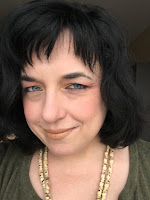 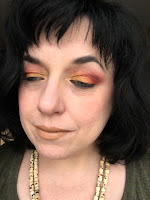 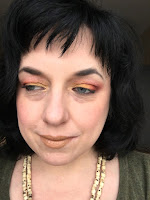 i have been having some allergy issues, which accounts for a lot of the sagginess around my eyes, but this actually looked pretty good in person. other than "goldmine" the shadows are all matte or near matte, which i find gives a really nice definition to the colours, as opposed to letting them all run together in one big mess.

this is not an appropriate look for my colouring, obviously. it's too warm by far. it would work a lot better on a woman whose colouring was that of a true or dark autumn, someone who had that fiery warmth in them already. i do think that the saturation level is acceptable and, as i mentioned in my original review, "enoki" is a surprisingly workable neutral for me, being more yellow than brown-based. 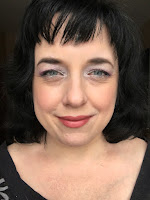 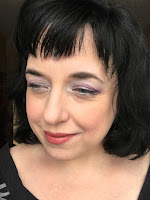 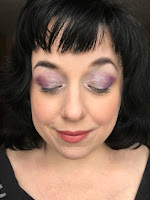 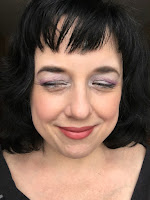 this one is much better suited to the undertones of my skin, definitely. i think you could argue that the eye makeup is a touch too cool, but there's just enough neutrality in the blush and lips to offset it [i think]. of course, the idea was supposed to be to create a frosty, ice queen coming to end the world look here, but i had to leave the house and run some errands, and i didn't especially want to approach looking like i was heralding the end times. ["i will take this loaf of bread, some haagen-dazs ice cream, and your soul."] coincidentally, although it's on the other side of the scale, "apolline" is another one of my favourite neutral/ natural lipsticks.

although i do rather agree with the inestimable mr. frost that the world will end in fire, for my part, i prefer how i look in ice. so perhaps that means i'm doomed to look rather feverish and unhealthy during the apocalypse, but i suspect that might be the least of my problems. i just hope i'm allowed to bring my makeup collection into the afterlife, and that i get a room with temperature control.