now, i've gone mascara-less before, many times, but it's always been on days when i just eschewed makeup entirely [there are more of those than you'd think]. i literally cannot recall a single time when i've put on makeup but passed on the lashes. lashes are kind of my thing. when i was born, my mother tells me that the first thing she noticed about me was that i had long, curly lashes, so i guess that made me a bit vain and protective about them. they're somewhat sparser than they used to be [although, luckily for me, not a lot], but i still take care of them and do everything i can to show them off.

one of the reasons that i never go without mascara is that my lashes are also very light blonde. and since they remain fairly long on their own, leaving them in their natural state can make it look like i have cobwebs on my eyes.

but i'm supposed to be taking chances, dammit, and that's the biggest chance i could get myself to take. so damn the torpedoes and forward march! 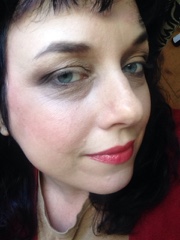 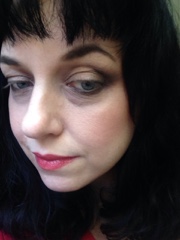 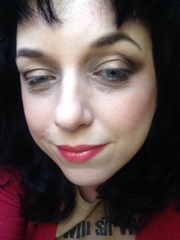 i apologise for the fact that i have to do an extremely un-beautyblogger type thing and use pictures from my phone, but unfortunately my camera was dead today. [it wasn't dead. you drained the battery and, despite receiving warnings the last three times you've used the camera, you forgot to recharge it. -ed.]

here's what you're looking at

i'm not totally put off by the results of the experiment, but it just did not feel like me. if the light hit me the right [or wrong] way, it did indeed look like i had cobwebs around my eyes, but i wasn't totally put off the idea of ever trying this again. now, a great deal of the reason it works at all is because i spent a lot more time than i usually would creating a halo of colour around my eyes. even more important, i put liner on my upper lash line ["desperation", a cool dark brown] and then i used the inky black "perversion" on my upper and lower water lines. so at least, i have a decent frame going. but i still feel like the windows to my soul are in need of some curtains. maybe some nice roman shades.

now that i've done this, i feel like i've conquered fear. skydiving has nothing on facing the world without eyelashes. [but just in case, i'm going to stay on solid ground for the time being.]