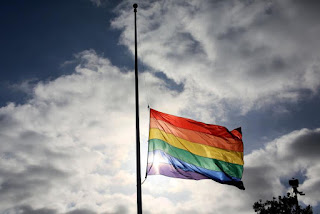 oh boy. there were a whole bunch of topics that came to mind over the last two weeks, based on scientific articles i've gone through, or stories that have shown up in the news, or just interpreting things that have been tossed around on social media, but finally, it comes down to the horror of last night in orlando florida. this is something that's rattled around in the back of my brain every time i've heard about someone going berserk in the name of christianity, islam or anything else and i feel that it's something that needs to be addressed both publicly and within the psychiatric community: is religious fundamentalism a form of mental illness?

that might sound like a scary gauntlet to throw down. after all, most societies are organized around the principles of religious belief. for instance [and à propos of the attack in orlando], many people have difficulty accepting homosexuality not because it is dangerous or unhealthy [factually speaking, it is neither, unless you factor in the danger posed by hate crimes], but because it contradicts the religious principles that underpin many of our society's core beliefs. when you subtract the prejudices imposed by religion, a lot of things that were previously forbidden become open for debate. like wearing clothes made from more than one fabric. or homosexuality. the bible [or rather, the old testament, which forms a basis of judaism, christianity and islam] proscribes both of those, with roughly equal force.

taken from the point of view of an atheist [one who believes that there are no "gods" or life beyond what we experience] or an agnostic [one who believes that the existence of gods is irrelevant to how humans should live], there is no reason for homosexuality to be feared or condemned. nor is there any reason for drug use to be condemned, so long as it does not cause significant harm to the user or others. nor is there a reason for certain foods to be proscribed, again, assuming that there is no greater harm caused by consuming them. this is all a very contentious area, but there is one common denominator: it is not acceptable to condemn anything without some rational reason for doing so, and religious beliefs alone do not constitute a rational reason. [in fact, religious leaders themselves have made it pretty clear that those who perpetrate crimes like the one in orlando over the weekend are not acting in the name of faith, or any other noble cause.]

thus has the question i raised earlier come to mind: are there certain forms of religious belief that cross the line into psychosis? i'll give you a spoiler alert as to my position on the issue: yes, there are, but we ignore them precisely because we feel they are protected on account of being religious. no. certain beliefs are dangerous to the general public and they need to be called out as such. the belief that people deserve to die because of their sexual identity is a glaring example. so is the belief that women should be subject to different rules than men. as is the belief that those who believe things that are different have lives that are less valuable. think that's just so much liberal hooey? let's consider some of the primary symptoms of psychosis:


i've drawn these points from a few different places, all of which have some claim to expertise on psychological issues. and while there may be some debate on what the "average person" or "normal person" is, it's worth considering that the legal system of democratic countries is always based [at least in theory] on the perceptions and actions of the so-called reasonable citizen. we judge others all the time based on whether or not we think that their actions align with what could reasonably be expected of a person in the society. and yet we routinely place actions- any actions- that are inspired by religious beliefs as somehow outside the continuum of rationality.

the culprit in the orlando massacre claimed to act on behalf of isis, but possibly because he felt they shared his delusion that homosexuality was an abomination and deserving of violent retribution. republican lawmakers and [until recently] presidential candidates ted cruz, mike huckabee and bobby jindal appeared at an event headed by a religious leader who believes that homosexuals should be put to death by law. [in the interest of fairness, cruz later admitted that it was probably a mistake to openly align himself with a person who held those views.]

my point is that the views of isis and kevin swanson aren't particularly different, nor are they "normal". most those who don't support marriage equality, or who have qualms about gays and lesbians serving openly in the military, or even those who don't understand how transgenderism works don't think that lgtbq people should be put to death for who they are. the vast majority stop at "they're going to hell". therefore, the belief that lgtbq people should be put to death is bizarre [well outside the normal scope of thought] and without factual basis. it is also delusional, in that those who profess those opinions often conjecture that lgtbq persons have special rights or powers not conferred on others, something which is demonstrably untrue. [in fact, they are much more likely to be the victim of violent crime simply because of who they are, among other disadvantages.] and if one carries out a massacre like the one in orlando, or like the many others directed at gay clubs/ safe spaces, it is most likely because one feels either commended to do so or excused from culpability in doing so by a higher power.

goodness, that seems to tick a lot of the boxes that we normally associate with psychosis. so why do we keep giving those who cloak themselves in religion a free ride. as mentioned above, the very people who most agree are tasked with setting the earthly "rules" for religion reject such actions. if the vast majority of religious leaders say that such actions are abominable, why do we accept the word of one person who says that his [or hers, although i'm sorry to say it is "his" in most cases of violence] in terpretation is the correct one? why do we hesitate to tell someone that their interpretation of religion is perverse, when, if someone were to express similar views outside the bounds of religion, we'd have them locked up?

i normally try to point people towards help or solutions with these columns, but i have to admit that, in this case, i'm at my wits' end. i don't understand why we are so eager to apply the terms "nuts" or "psycho" or any of the pejoratives associated with mental illness to virtually anyone in our lives who acts in a way that we don't like, but we give a pass to those who invoke religious beliefs. most democracies embrace freedom of religion as a fundamental right, but i do not understand how that becomes freedom to interpret your religion in a way that justifies harming others. such actions are not religious [according to the leaders of the invoked religions], but a perversion. they are no more reflective of the religion invoked than david berkowitz's murders are of the thoughts of dogs. so rather than describe them as religious acts, we should call them by the term that we so eagerly assign to similar actions that do not invoke a major religion: people who espouse this sort of violence are mentally disordered. the beliefs that lead them to violence are delusional and dangerous. such people are psychotic and need treatment before they harm others.