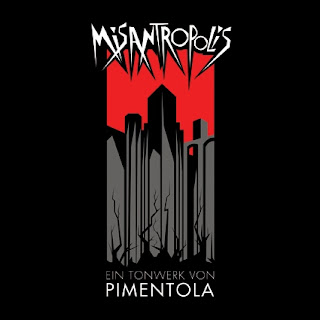 earlier today, i responded to a tweet-buddy [i don't even know what you call people with whom you interact on twitter, so that's what i'm sticking with] who asked followers to name an album that they loved but that no one else seemed to know about.

you'd think, given my interest in music that people usually assume is some sort of malfunction, that this wouldn't be difficult for me to do, but most of the people i know are ones i've connected with in some way or another because of music, which means that there's a pretty significant overlap happening at all times with at least some of them. nonetheless, there are a few albums that have stuck with me that no one seems to recall. either the bands were never able to reach that great and audience, or the earlier or later material was much better known, or they simply didn't stick around long enough to make a solid impression.

as more music gets released all the time, the dangers of missing out- of everyone missing out- on a good thing becomes far higher. i check in on bandcamp and soundcloud more or less daily, and i regularly get music to review. all that has done is make me acutely aware that there is a mountain of music that i'm missing. without that, i'd still be missing lots of stuff, but i wouldn't really be aware of it. and that's just new stuff. there's thousands of hours of music that i'd probably love, except that it no longer exists, or at least is no longer accessible.

so, with all that in mind, i thought i'd share a few things that have been close to my heart but far from the spotlight, even the teensy spotlight that shines on the genres of music that i follow.

i've always had a love for the music released in the late eighties by play it again sam records, but this will always have a special place in my heart. neon judgment had more dancefloor appeal and meat beat manifesto were more raucous, but this album has a kind of film noir appeal- halfway between art and pulp. fun fact: it was the song "yes" that originally made me watch the film onibaba, which has since become one of my all-time favourites. members of the band are still active and much of their back catalogue is available through their bandcamp site.

of roughly the same vintage as bent massive, but from a slightly different part of the forest. there's a jazziness to a lot of the material on this album that would normally put me off, but somehow, i can't get enough of it. impossible to get for years because it was released on the ill-fated cherry red records, i was lucky enough work at a radio station that had a copy. good news is that it's now available as a digital download through itunes. go figure.

the mid-nineties seemed to see a blossoming of ambient music in the united states, particularly in the southwest. groups like life garden and voice of eye developed more of a following, but i always saw this group as the hovering on the edge of that scene, weaving in some of the same psychedelic-sounding elements, but remaining a little more remote. i can't believe fans of zoviet france weren't all over this, but since it was released on the band's own label and received only limited distribution, i guess that they never heard it.

triage :: the cessation of spoil

although both of the people behind this project- chet scott [ruhr hunter, blood of the black owl, etc.] and scott candey [gruntsplatter, blunt force trauma, umbra, etc.]- are well enough known in dark ambient circles, this album seemed to slip right under the radar. maybe it got lost in the shuffle of both artists releasing quite a bit of material around the same time [including a split album under their better-known artist names]. maybe people didn't realise who was involved. or maybe its darkness was a little too subtle, while its ambience was a little too ominous. nevertheless, it's a wonderfully tense, creepy album. the first time i listened to it, i had vivid nightmares. still to be found in the backrooms of some distributors.

a one-off romp from two members of the power electronics outfit ppf [propagande par le fait] that channels early cabaret voltaire, offbeat electro acts like crash course in science, and a healthy dose of french punk. this album has been a staple on my dj playlists for years and i've been asked about it more than anything else i play. there are obviously some difficulties involved in doing an internet search for the band, but the reward is that this release is obscure enough that a number of distributors still have copies.

when i responded to the tweet i mentioned at the beginning of this post, this was the album i named. finnish group pimentola released their first album in 2000, followed by a few compilation appearances and 7" releases, none of which seemed particularly exceptional within martial industrial/ neoclassical industrial circles. then one of the band members left, and the one who remained reinvented the act, giving it a strange and  wondrous new sound and getting signed to genre heavyweights cold meat industry in the process. misantropolis is the one and only album that came out of this new incarnation and to this day, i struggle to think of anything that really sounds like it. [extra points for its brilliant artwork, pictured at the top of this post, and the sharp humour evident in titles like "psychopompous".] harder to find since cmi closed up shop.

this could keep going for a while, but, like a good bartender, i'm going to cut myself off before i get all rambling are start to make people want to avoid coming near me. because seriously, that's where this is heading.