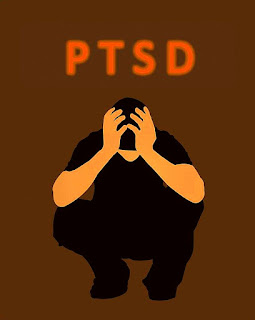 this is a repeat of a post from 2014, which is kind of lazy, but it also ties into a larger plan i had to do a couple of posts on post-traumatic stress disorder. this is a condition that is becoming increasingly [and disturbingly] widespread and yet our understanding of it hasn't progressed at the same pace.

i had started to write an introductory post about this when i realised that some of it sounded familiar. it turns out that i already had a perfectly good introduction to the subject written. i'll be returning to ptsd next week, but in the meantime, here's a look at the basics.

although i read up a lot on mental health issues, i have to admit that one that i've studied very little is post-traumatic stress disorder, or ptsd. there's no particular reason for the avoidance, although i suppose it's partially because the term is quite self-explanatory. it falls within the anxiety spectrum and is the result of an event that caused a fear of imminent death or harm to oneself or others. but i thought that i would write something on it this week after a preliminary investigation turned up an absolutely horrifying statistic from the canadian mental health association: ptsd is believed to affect 1 in 10 people and is one of the most common forms of mental disorder.

i beg your pardon cmha???

perhaps i'm the only person to think this way, but that ratio seems unacceptably high. how many of you know ten people? statistically, it is likely that at least one of them have suffered from ptsd at some point in their lives. that's not just a matter of having gone through an acutely stressful event, that means the person has experienced something so stressful that it has changed how their brain processes information, which is pretty scary if you think about it.

although the condition may have been noticed as far back as shakespeare's time, it was really only with the "total wars" of the twentieth century that doctors became aware of the effects of stressors [the name given to traumatic trigger events] on the human brain. after world war one, many soldiers started to return home with profound mental problems, even if they had no evident physical injuries. in fact, it is largely because of wars that we understand anything about post-traumatic stress disorder at all is because of wars. much of the research that psychiatrists rely on even today was conducted on vietnam veterans in the 1970s.

some psychological professionals argue that there should be a distinction made between the sort of ptsd that is experienced because of an acutely traumatic event of relatively short duration [e.g., being assaulted or raped] and those of a prolonged duration [e.g., being subject to abuse in childhood or being abused by a spouse], dubbing the latter "complex post-traumatic stress disorder". my opinion- my inexpert opinion- is that there are enough surface differences between these kinds of events that the demands for treating them as different variations of anxiety disorder seem reasonable. the psychiatric community, however, disagrees. post-traumatic stress disorder remains a single entity in the dsm-v.

so does going through some sort of traumatic event- the unexpected loss of a loved one, ongoing abuse, being the victim of a crime, fighting in war- automatically mean that you will develop ptsd? is that why the incidence of the disorder is so high? to the first question, no it doesn't and to the second, yes, partially. the fact is that a majority of people can expect to go through some type of traumatic event in their lives, but only a minority will be unable to "escape" it- relieving the event through nightmares or even dissociative states, avoiding putting themselves in similar circumstances, becoming emotionally "numbed", etc. and unsurprisingly, there may be answers as to who is likely to go through ptsd from science.

there are some studies that indicate that the amygdala- a suspect in the formation of many disorders- plays a role. [see "size matters"] another suggests that the size of the hippocampus also plays a role. the hippocampus is involved in the process of placing memories in their proper context. those who have developed ptsd have incredible shrinking hippocampi- showing a 20% reduction in volume compared to those who did not develop the condition. and of course, it's suspected that this makes them less likely to be able to place memories in their correct setting. for instance, being assaulted and robbed near a mcdonald's could cause someone with ptsd to have anxiety attacks in the presence of a mcdonald's sign. the sign, of course, is neutral, but the traumatized brain makes the association, without properly remembering that the sign was a background detail in what happened to them.

strangely enough, a study of vietnam veterans indicated that injuries to the prefrontal cortex may actually protect against the development of ptsd. not that i recommend it as a protective measure.

whatever the ultimate cause- and i hope that science continues to make headway in this regard- the changes throw the systems regulating neurotransmitters into chaos, supplying too much of some elements and not enough of others. while this can sometimes be managed through medication, the greater emphasis on treatment is on therapy, individually or in groups.

understanding post-traumatic stress is, in a way, understanding what it isn't. for starters, it should not be confused with the stress felt immediately after a traumatic event. this is a normal reaction. ptsd should be suspected when the initial stress doesn't not significantly subside, or when it reappears anywhere from a few months to years later. it is also not the same as a regular mental or mood disorder, in that there is a specific cause- one reason why therapy is so particularly helpful. and the level of trauma felt is not necessarily related to the threat presented by the specific initial cause. once your body's systems are thrown off, there is no telling [well, there may be, but we haven't figured out the "tell"] how bad the chain reaction can get. there are levels of ptsd, which can be addressed through a trauma screening questionnaire, the primary diagnostic tool for the condition.

the most important thing is that if you suspect you or someone you know is going through any form of ptsd that help be sought immediately. the sooner that a medical intervention is made, the sooner the knots of trauma can be undone and the brain returned to its normal functioning. whatever your normal happens to be.