let me tell you about my backside 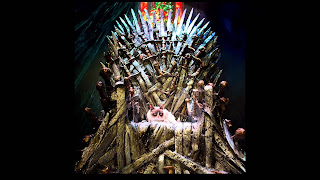 as i mentioned in my previous post, where i linked back to an older, unrelated post, i recently purchased a new chair. i received said chair this morning and giddily went about assembling it [with dom's help]. it's not an über-deluxe, space-aged thing, but it's a distinct improvement on what was here before. [although technically, wouldn't anything built in about the last half century qualify as space aged? we've been up there for a while.]


the truth is far more banal: i carried it out and threw it on the curb, where it will be carted away by experts tomorrow. although, since it's so clearly an evil, person-hating chair, it will probably rise from the dump and victimise a new home office. i don't care. that's their problem and i have a new throne from which to pontificate.

my first thought was that this will help me write, because it will no longer be as uncomfortable for me to sit at my desk for hours at a stretch. my second thought, of course, was that i'd just taken away one of my main excuses for not being able to write more. which is probably why i've been sitting here for an hour or so thinking that i could write, but focusing more on why i feel different in this new chair. i have back support. the seat cushion does seem to have been designed with human buttocks in mind. i don't have to clench my abdominal muscles to avoid falling over. [that last one is probably bad news, since clenching my abdominal muscles on my uncomfortable chair was really the closest i've come to working out in a long time.

i am still going to have to find a little footstool to keep my legs at the proper angle, because no one thinks about #shortgirlproblems when they're designing desks. i'm also haunted by the idea that my armrests are ever so slightly different heights, which leads into the much scarier idea that my arms are slightly different, which makes me want to immediately run away and try on every one of my long-sleeved tops to see if there's a problem, which would be useless because the nature of fabric would likely disguise it anyway.

nothing is ever perfect. if it were, i'd probably be too busy trying to find problems with it to notice.

of course, all this thinking about the chair that's supposed to make it easier for me to write, during the one hour in which i've been able to sit at the desk and relax in such a way that might actually be conducive to writing means that i haven't actually gotten any writing done. at all. except this, which really shouldn't count, because it's just me ranting stream-of-consciousness style at you, the reader who deserves more and is wondering why you're still reading this.

i'm sorry. i have nothing for you. i'm not even talking about my butt, which i basically promised i would in the title. it's fine, though. it's a little early to say that everything is feeling better, but i can assure that i feel my posterior is much better balanced. so perhaps proper butt-balance is what's been holding my career back from stratospheric heights all these years. i'll get back to you on that, i promise.

for those of you who are participating in national novel writing month, or who plan on writing about something that isn't your backside this november, i found this article, which is pretty much the best non-advice advice i've come across, even if it doesn't mention butt-balance.