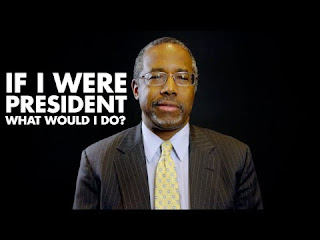 i'm normally loathe to share things about violent, stupid or hateful things being attributed to mental illness, because i know it only backs up the myth that people suffering from mental illness are violent, stupid and hateful people. but i have to admit that this article about republican presidential hopeful ben carson, who has pulled ahead of long-time leader donald trump in one recent poll.

a lot of people have struggled to reconcile the image of ben carson the neurosurgeon, the first man to successfully separate twins conjoined at the head and to perfect a drastic surgical technique for treating pediatric epilepsy, with the man running for the republican presidential nomination, who seems prone to statements that are politely termed "eccentric". because some of those statements sound like red meat for the republican base, the mainstream media has been prone to accepting them as policy statements without analysing them further. sure, he likened abortion to human sacrifice, but a lot of republicans think that abortion is murder of an infant. and he said that the affordable care act was the worst thing to happen to the united states since slavery, but republicans in congress have been saying much the same thing, in only slightly less inflammatory terms.

left-wing media have contented themselves with the idea that he can be "book smart" and still be incredibly stupid and ignorant and i'm not saying that that isn't the case here. it's reassuring to think this and makes for better humour, but it's also a little difficult to believe. yes, ben carson is a devout christian, which undoubtedly shapes his beliefs, but it's not like he's lived a completely sheltered life. he's served on the board of directors for large corporations, including liberal-leaning costco and kellogg, so it's clear some people are satisfied that he knows something about business, even if they aren't aligned with his political beliefs. he's written six bestselling books and numerous peer-reviewed scientific papers, and he was raised in detroit, not exactly the backwoods. so, yes, it's possible that despite all this, he's remained wilfully ignorant. but is it really the most likely explanation?

so is there any evidence to support the theory that carson may be afflicted by something other than blind ignorance? hard evidence, no. but circumstantial evidence, just possibly.

take as an example the case of john nash, the nobel prize winning mathematician, whose work established principles used in economics, psychology, biology, logic and computer science. he was also a paranoid schizophrenic who believed that men in red ties were part of a communist conspiracy. while this might feed into the trope of the tortured genius, it's a very real story and nash believed his delusions, because they came to him in the same way as his uncanny understanding and aptitude for higher mathematics. the belief in a secret society of communists is exactly the sort of thing that would get picked up by the media as evidence of a ridiculous belief had nash run for public office. but is it any more ridiculous than the things ben carson has been spouting? arguably not.

secondly, let's consider ben carson's "low energy" [thanks, candidate trump] persona. we normally associate disorders like schizophrenia with active delusions and psychosis. but it can just as often be a condition marked by negative symptoms: lack of affectation, emotionless speech, inability to make or maintain eye contact, inability to focus on a conversation, which can lead to garulous or incoherent-seeming answers. i described dr. carson's first appearance at the last debate as "medicated", because, on arrival, he displayed the groggy, confused diction and movements of a person just roused from a good nap. during the debate, he seemed to ramble at times, finding it difficult to stay on topic, hesitating to dismiss the idea that vaccines cause autism [which, as a doctor, he should know to be false] and awkwardly shrinking from donald trump's attempt to give him a congenial high-five, as if he were unable to interpret the gesture. his famously "soft-spoken" demeanour is completely atypical for a politician, but very typical of negative-symptom schizophrenia.

it's obviously a pretty big leap to diagnose ben carson as a schizophrenic, but i'll admit that, now that the idea has been proposed, i can't entirely dislodge it. his statements seem to display an incoherence that goes beyond the deliberate provocations of donald trump, or the arch-conservative bile of ted cruz. his ideas exist in a universe of their own, which he dispassionately wanders without taking notice of who observes him. of the many bizarre statements he's made, none of them seem deliberately inflammatory, merely casual observations from a man who seems incapable of getting truly fired up about anything.

i like to think that mental illness should never be a barrier to anything, but even i have qualms about the idea of a person with an undiagnosed, untreated mental disorder rising to what is arguably the most powerful position in the world. and now that he's in the pole position to become one of two candidates for the job, maybe it's time we stop joking about how he's batshit crazy and start thinking about whether or not there is something more seriously wrong.