May 03, 2015
urgh. so this one's been sitting on my to do pile for a longer time than it should have. it's another review of the spiffy new liquid shadows, called "eye tints" from armani. i've already taken a look at rose ashes and emeraude, but i've kept forgetting to post a review of the third tint in my collection, a shimmery little number called "cold copper". if that name, redolent of chemistry and metal works and alchemy [no? just me?] doesn't appeal to you, it also responds to being called #9.

i'll make this quick, because i know your time is valuable and i've discussed this formula twice already. in the three shades i've tried, everything has been very consistent, which means that "cold copper" has the same smooth application and layer-able coverage that made me want to start collecting these.

the main difference in this case is that the shimmer is cranked, so that "cold copper" really does look like liquid metal. it's frostier than either of the other shades i've reviewed [neither of which was exactly matte], although it's possible to mute that effect by going for a lighter application. layered to full power, i found it a little overwhelming in the way that very frosty shades can get. it did give that "crinkly" texture to my lids [rather, it emphasized the crinkly texture that's already there], which was a bit of a disappointment, since i had no such problems with either "rose ashes" or "emeraude". with a lighter application, the texture looked much nicer, but still had a burnished metallic shine.

after swatching all the shades from the line a couple of times at different counters, i'm noticing that there are "subgroups" within the collection, depending on how much shimmer and what sort of shimmer is present. so i thought i'd give you a rundown of my findings:

*i think that jade would fit here, but every tester i've tried has been a dud. i think this might be a shade best avoided, which is too bad, since it's certainly unique.

the name "cold copper" is a bit misleading, since the shade isn't coppery at all. it is definitely cool. it's a medium, silvery taupe. yes... taupe. a girl can never have too many. i find that it looks darker on my eyes than i thought it would based on what it looks like in the tube and that it looks a little cooler and greyer as well.

the texture of these armani eye tints and especially something as metallic as "cold copper" makes this a difficult shade to duplicate. unless layered quite a bit, it doesn't have the heavy frosted effect of powdered shadows. on its own, it's gleaming and silky.

for the purposes of offering some kind of comparison, here's a shot of it next to its sibling, rose ashes.

i've been wearing this shade quite a lot, because wearing neutrals is extremely easy and i like playing around with different methods of using these shadows. my preference with this one is actually to apply it with my fingers, which seems to tamp down the shine. applying with a brush will amplify the shine, but it can also make the colour go on unevenly if you use too much pressure.

here's a quick look at the colour applied [with a brush] and layered to get the full-on metallic effect. i think you'll see why i won't be using this in the future. the silver overtone is much more obvious the more you add, so if you have smoother skin on your lids [i really don't], indulge, by all means. 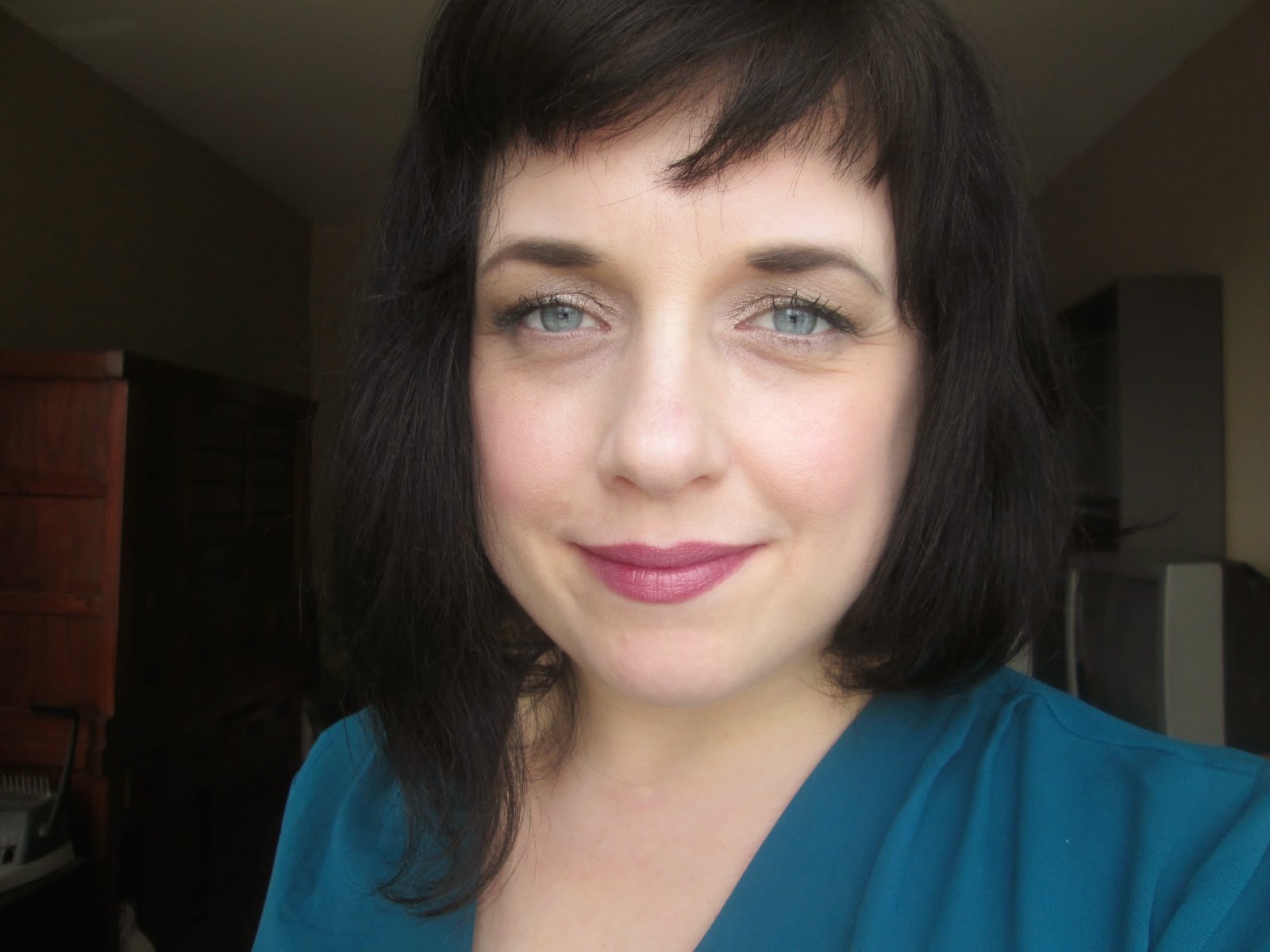 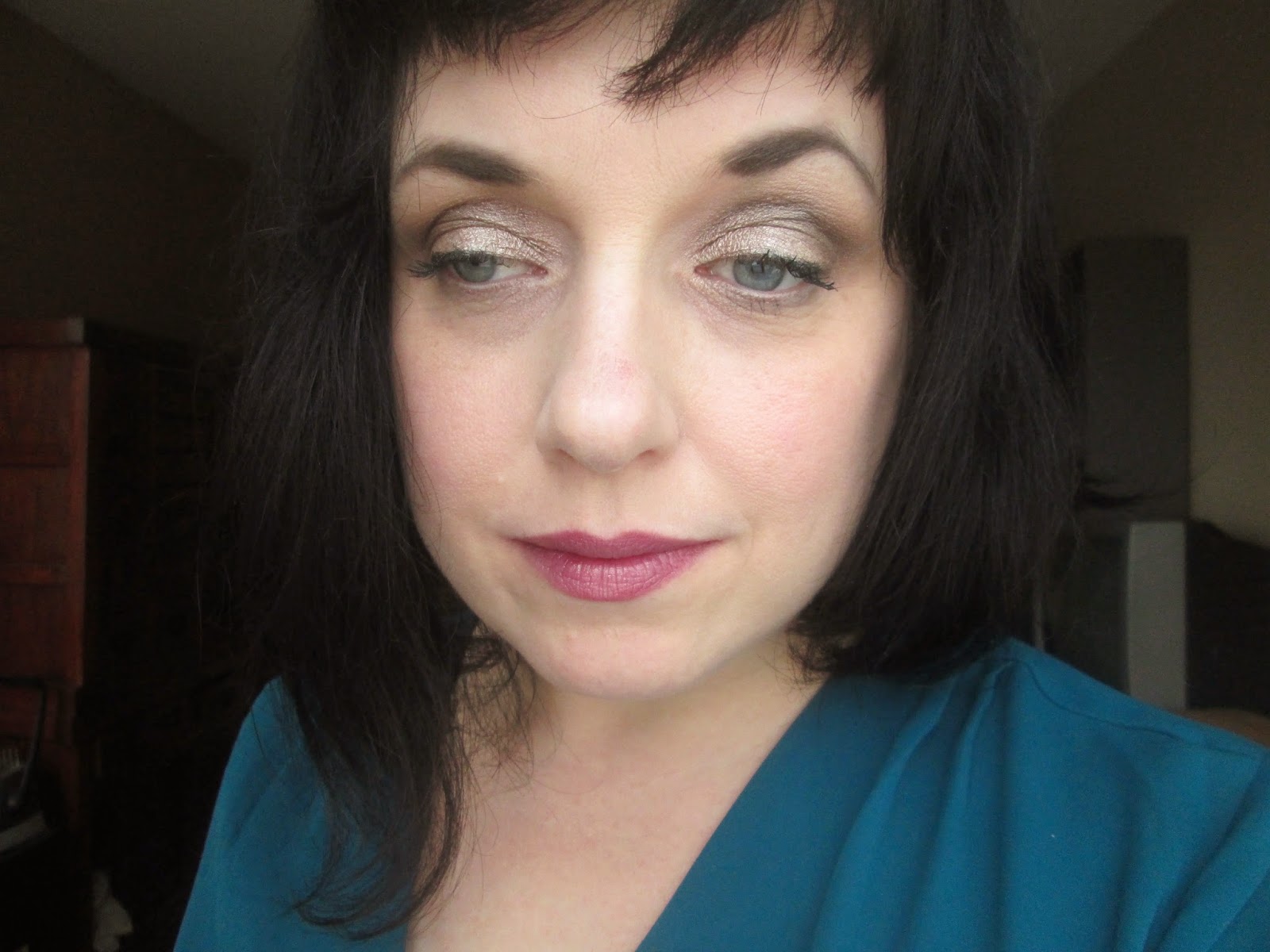 if you're interested, i have chanel creme blush in "chamade" and "poudre signé" on my cheeks and rouge d'armani sheer lipstick in 602/ "black lacquer"."cold copper" is joined on the eyes with shades from the armani "orient excess" shadow palette.

here's a much better look at "cold copper", used on the outer third of the eyelids and into the crease. 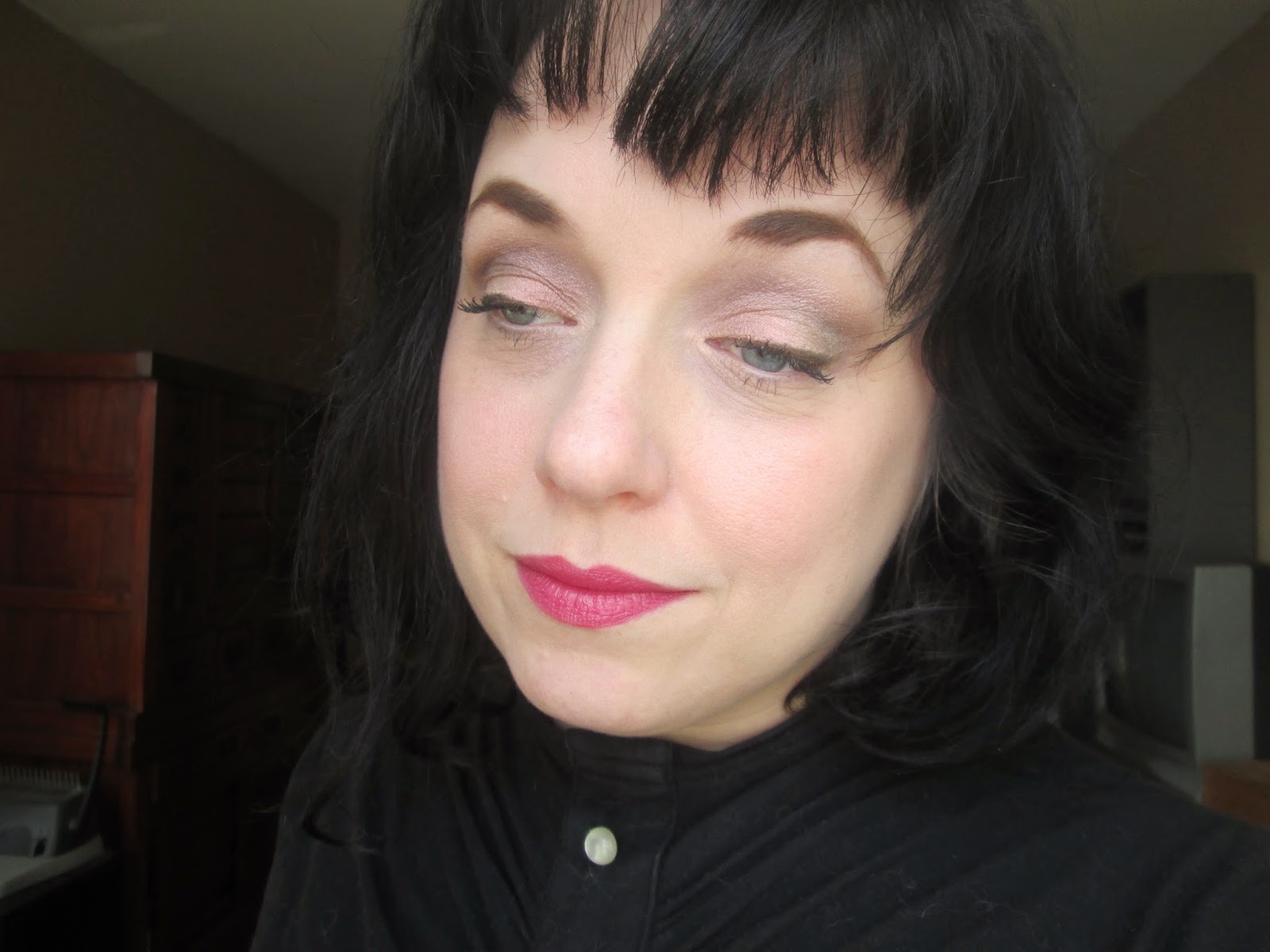 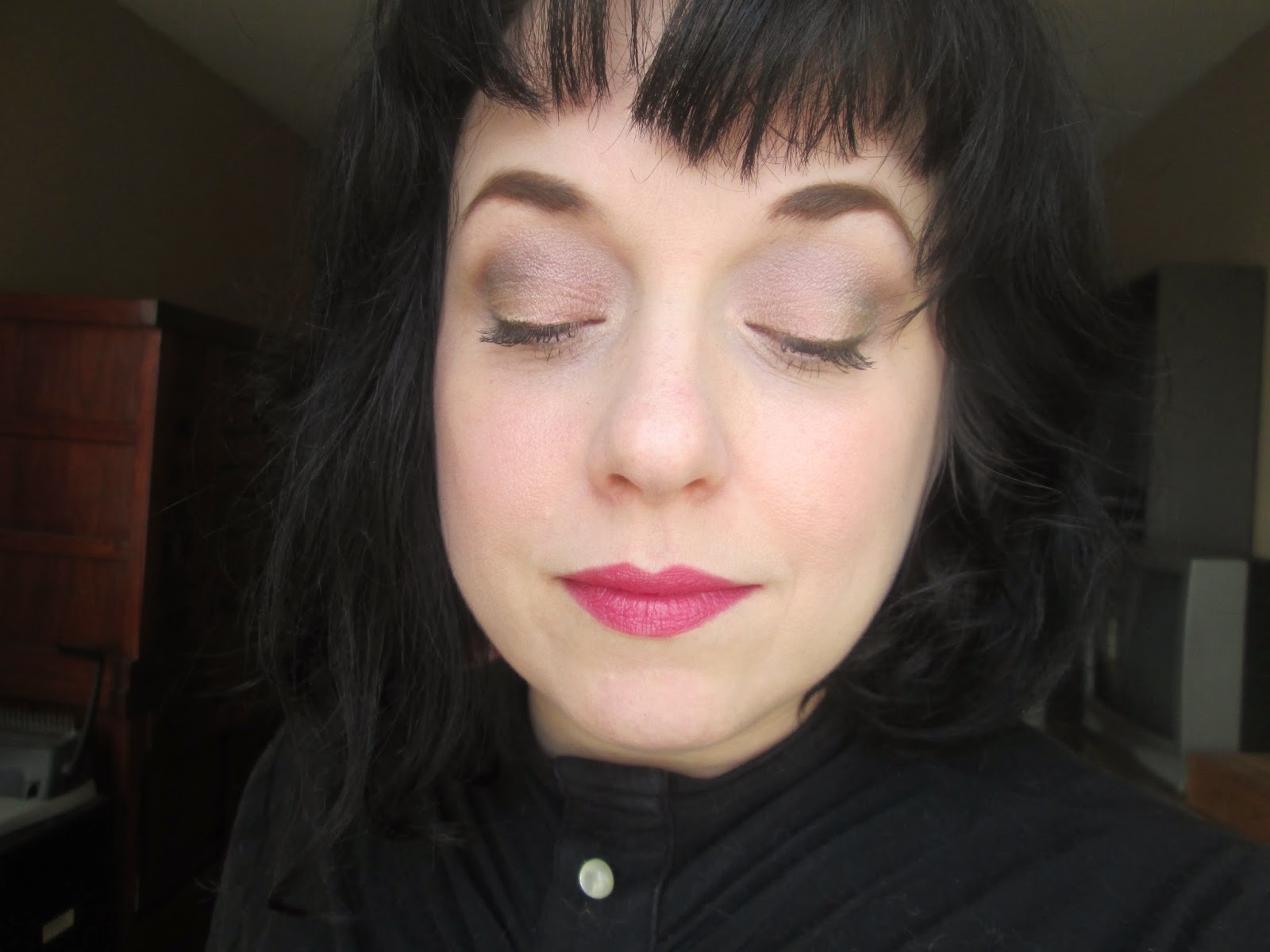 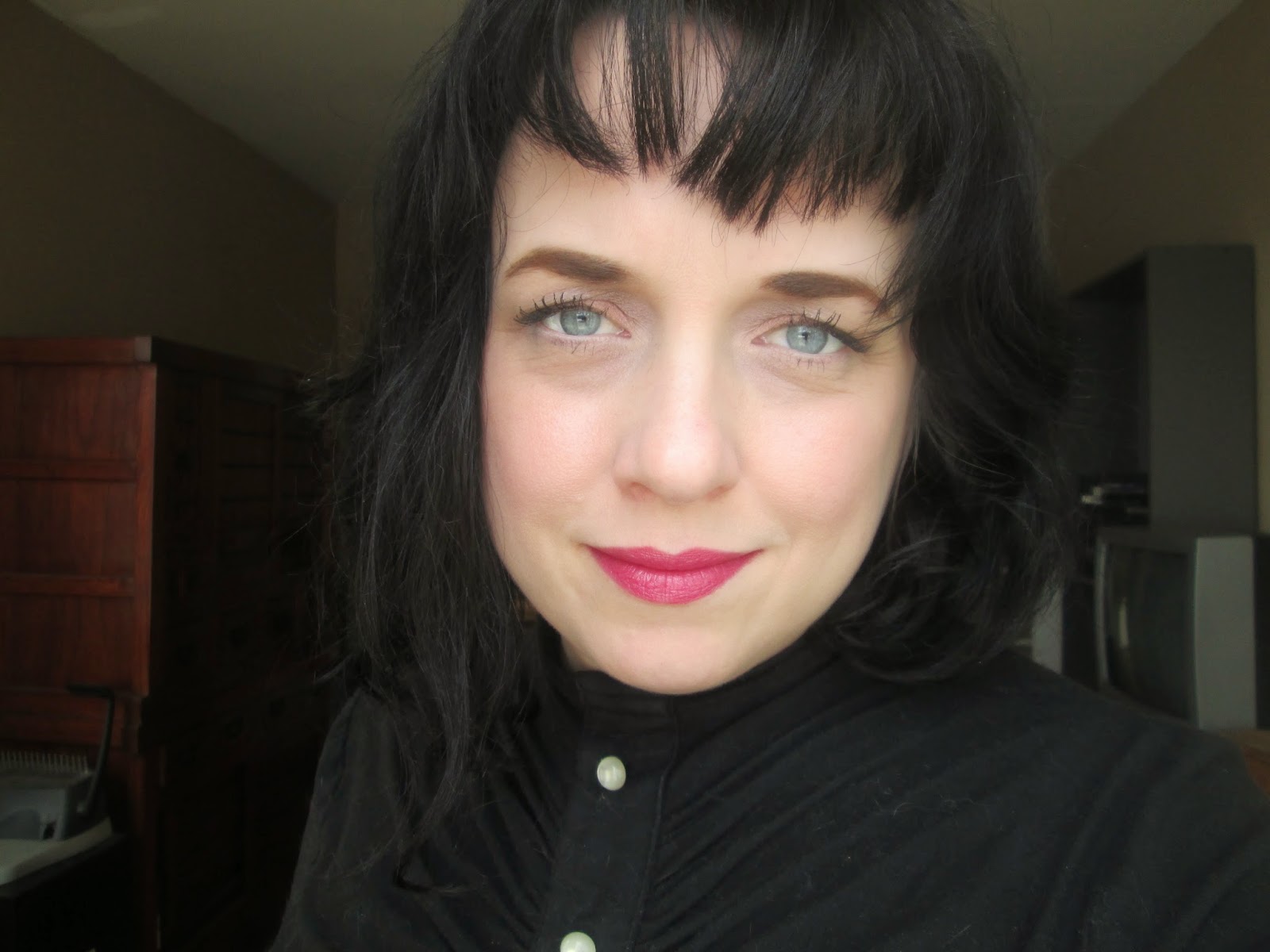 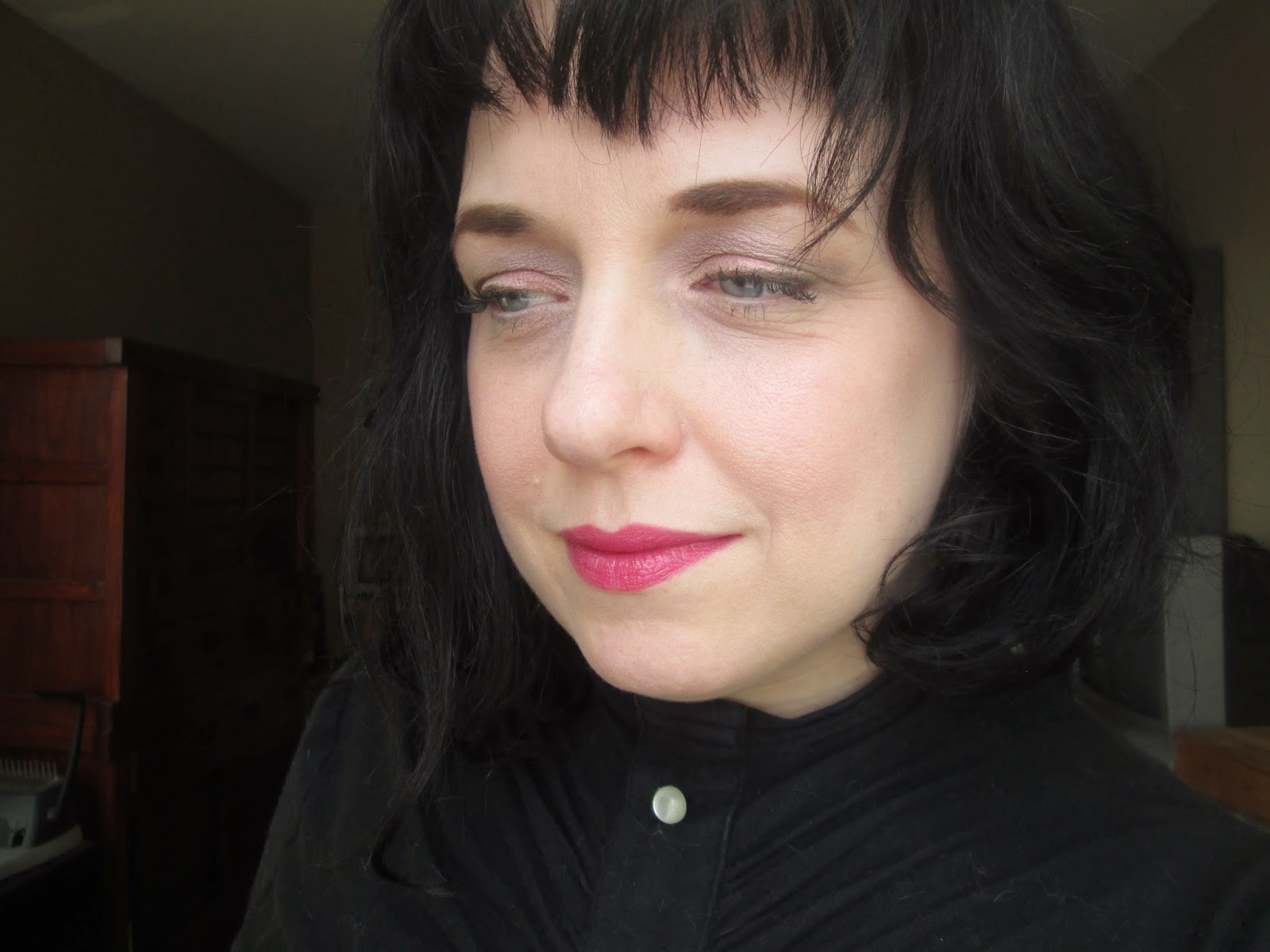 in this look, i'm wearing nars blush in "deep throat", mac mineralize skinfinish in "perfect topping" and the limited edition mac lipstick "blood red", from their 2009 collaboration with designers d-squared. i can't fathom why mac hasn't repromoted this colour [although i say that about a lot of colours], but chanel rouge coco shine "fiction" is a reasonably close shade. alternately, if you have the limited mac shade "dish it up" or guerlain "lou ling", those would be comparable as well, although definitely not exact. [the links have swatches of "blood red" compared to all those shades, fyi.]

on the eyes, i'm wearing "rose ashes" on the inner part of my lids. don't the two eye tints look lovely together? i was a little nervous about blending them, not because i didn't think they'd blend, but because i was worried they'd blend too well. as it turns out, they were fine. if the difference in colour had been sharper, i probably would have used an intermediate powder shadow to bridge the gulf.

i'm also wearing the darker shade from hourglass "exhibition" in the crease and rouge bunny rouge "alabaster starling" as a highlight. [since "exhibition" has been discontinued, you can use the darkest shade from the new hourglass "exposure" palette. or any dark eggplant shade you have at your disposal.]

so yes, the love affair with these luscious liquids continues. will there be more? indeed, there may well be, beloved readers. there's one in particular that has captured my fancy... any guesses as to which one?