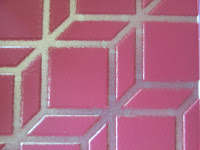 i keep mentioning how my infatuation with nars took hold because of their product names. not just the ubiquitous "orgasm", but the fact that they have products named after classic low-brow films ["night breed" and, of course, "deep throat"], marlene dietrich ["scarlet empress", "lola lola", "blonde venus", etc.], under-appreciated cinematic classics ["night porter", "blade runner"] and some of my musical icons ["blondie", "heart of glass", "new order", transeurope express"]. so when i heard that nars was releasing a blush called "boys don't cry", it was pretty much a done deal. i knew it was coming home with me and it didn't matter if the blush turned out to be green. because it's called "boys don't cry".

it's released as part of a collaborative collection with french designer pierre hardy of two super-sized blushes and a half a dozen nail polish duos. one of the associates at murale described them as being sets "one for the fingers, one for the toes", which i hadn't thought of, but which actually makes perfect sense. thus far, i've limited myself to the one blush, but there's nothing to say that's final. 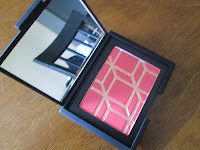 emblazoned with hardy's geometric cube pattern, "boys don't cry" is an intense red-coral that reads very warm in the pan, but that looks more neutral on application. it's a matte finish [the gold pattern is an overspray that disappears almost immediately, but doesn't look like a heavy or dead-seeming matte. in fact, it brightens the cheeks quite noticeably.

it is a colour that pale ladies [like me] will want to use lightly. there's a ton of pigment, which means that it's a little too easy to overdo it and end up with the sunburnt/ drunk look. not what you want. even lightly applied, it's going to be a fairly intense blush, but i like the fact that it blends so nicely and evenly, allowing for quite a natural flushed look.

by way of comparison, mac "salsarose" is a bit pinker, but the two are definitely in the same ballpark. rouge bunny rouge "florita" is much softer- which should give you an idea of the intensity we're talking about.

the only drawback to this blush is that it's more expensive- a lot more expensive- than a regular nars blush; $48cad compared to $30. that's a big jump, but the compact is a lot larger and the intensity of the colour basically means that you're not ever going to run out. it also means that "boys don't cry" is the same price as a chanel "joues contraste" blush, which is a lot smaller.

it's a limited edition piece, but it's still widely available wherever nars is sold, along with the other elements of the pierre hardy collection. nars are generally excellent about making sure that everyone gets a fair shot at finding their limited items before they're discontinued, which is just one more reason to love them.

here's the blush in action. [for those of you following my sci-art adventures, i'd call this one a bright spring look, although it's not nearly as intense as one could get with a bright spring colour palette.] 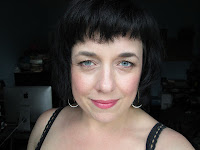 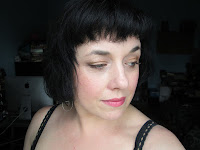 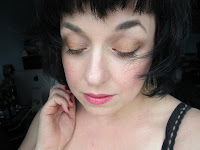 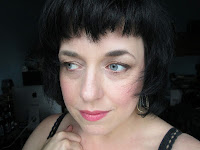 and of course, i can't let this post go without posting...