March 24, 2013
i figured that i might as well make myself look presentable, despite the fact that i continue to suffer from the after effects of the plague of boils on my face. however, i've noticed that lately, my littlest fur-baby, while she's quite a little tomboy in many respects, is now at least as excited as i am about the prospect of me putting on makeup.

because whenever it's time, she jumps up on the dresser to, er, help. she gets so worked up by the prospect of getting to play with mom's awesome toys that i've had to learn how to acquire makeup one-handed, while using the other to keep her out of the brushes and little pots. i think i can forever write off the possibility of buying guerlain meteorites.

of course, as soon as she sees my arm, she starts the second phase of the game, which is climbing on me, butting her head into my head, shoulder and hand and purring loudly. which means that i'm developing some pretty awesome skills with liquid eyeliner. also, i suspect i'll be embracing the "messy smoky eye" look a lot.

this sort of thing is a legitimate danger for any cosmetic-wearing cat owner, but lulu actually enjoys all the parts of the beauty blogging experience, including being involved in the photo-taking afterward. behold: 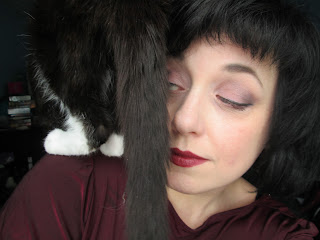 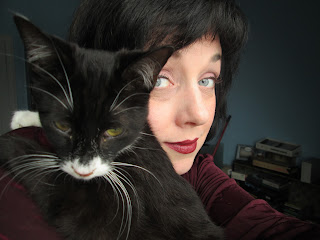 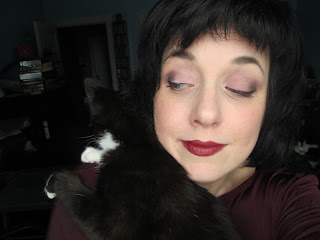 and here are a couple of less interesting photos, although you can see in the first one that seth made a photobomb appearance behind my left shoulder [your right]. 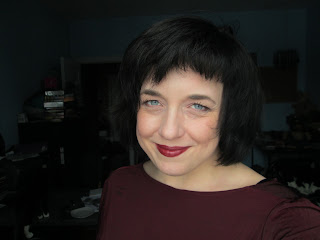 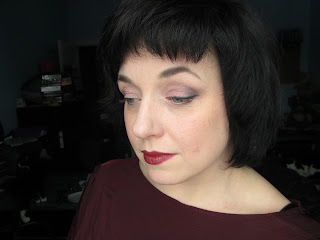 the mac 217 brush, which is fluffier than my tom ford blending brush and therefore more fun to watch.

my quo bronzing/ power brush [kinda like a bigger version of the mac 187]. she much prefers this for blending to my urban decay optical blending brush, which is dense, but thick and not prone to spreading its feathers all over the place.

shadows by rouge bunny rouge and le metier de beaute. she likes any single shadows that come with a mirror, since they are small and create light reflections that are fun to play with. it's like two toys in one! strangely, though, she seems to prefer these to square shadows like nars or chanel. palettes are less interesting, although she does occasionally like pushing them closed when my fingers are in them.

giorgio armani eyes to kill shadows. packed in powder + inherent sparkles + little stopper that gets removed... almost too much fun for one kitty.

blushes are less fun, but chasing blush/ powder brushes during application is awesome.

trying to catch a lipstick bullet as it comes out of its shell is somewhat amusing. also, any lipstick can be pushed into a human nostril by butting your head against it while it's being applied.

so here's an entirely lulu-approved face, done with her assistance:

*suggested alternates :: neutral pink = mac girlie [cooler and has more of a satiny sheen]; parure de nuit = i haven't really found a match, which is why i hunted this one down on ebay, but combining mac lightscapade with a wee bit of nars sex appeal might give you a similar effect.

important note :: always remember when doing tag-team makeup application with a cat to leave adequate time for clean-up afterward. this is not an activity for everyone. always clean cat scratches thoroughly and stop the bleeding before you apply concealer.