having failed to steal christmas, the grinch stole my mother's wallet 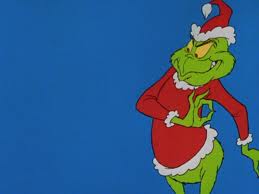 yeah, that's a fact. my mother was in montreal for christmas. she only does short visits, so we had a lot packed in: going out for dinner on the 23rd, presents and christmas dinner at our place on the 24th. brunch with dom's parents and his immediate family on the 25th. and on the 26th, she'd fly home.

the 23rd came off pretty well. it was a little marred by the fact that i had a festering stab wound, but other than that, it was fine. ok, it might have been less of a "stab wound" and more of a spider bite, but it was definitely festering and it could have passed for a stab would, albeit one made with a very tiny knife. the point is, that despite the always-present danger of going into septic shock, it was a pretty good night. we had a fine meal at the claremont.

the day of the 24th started off really well. my mum came over. we got to hang out and get the cat a bit tipsy, which is always an awesome way to entertain guests. presents were opened. and i managed to time everything so that i wasn't running around screeching and stabbing at things with a fork, which is usually what happens when i realise partway through the day that i've planned a menu that requires me to cook two different things on two different settings and have them miraculously pop out of the oven at the same time. actually, that's not true. i'm lucky if it's only two things.

but this year, i planned well. here's what was on our holiday menu ::

organic cornish game hen with molasses and allspice [this is the one time of year i cook meat at home]
corn custard [an annual tradition of mine; i cooked it for dom the first xmas we were together and it's become our thing]
mashed sweet potatoes with truffle and rum
beets with orange and ginger

plus, of course, there was wine, both white and red, as always happens on the holidays, because white wines give dom horrible headaches and red wines give my mother horrible headaches. we got a lovely argentinan malbec as a red- i always find these are a great option for what you pay- and a chardonnay from r.h. phillips. the latter was very nice, but i really do wish we could get their toasted head wines here in quebec. nothing says "christmas" like a fire-breathing bear, yo.

then things sort of came off the rails. somehow, my mother's wallet disappeared. the options we're going with are:

1. she left it in the back of the taxi she took to our house, because she was distracted by the fact that the driver somehow made the ride, which has cost roughly $15 every time she's taken it, cost $25. thanks champlain taxi.

2. simon stole it because she kept giving him wine and he wanted her to stick around.

3. the grinch somehow snuck in a stole my mother's wallet, in which case the grinch is way smaller than i'd anticipated and whoville may actually be the ant colony we've been periodically exterminating in our kitchen. sorry, cindy-lou.

the problem with losing your wallet on a national holiday the day before your flight home is that you're stuck with out i.d. and the airlines have gotten kinda sticky about that lately. after some digging, we were able to determine that the only thing to be done was that my mother had to file a police report- although there was no actual crime that occurred.

so instead of going to dom's parents' house for yummy brunch, my mother and i got to wander through montreal in -15 degree temperatures to find the police station nearest her hotel. officer cyr, who had apparently drawn the proverbial short straw and got to staff community station #20 all by himself. although since he probably knows where it is, i'm assuming he didn't have the 20-minute tour of the neighbourhood that we did on the way in.

officer cyr was extremely helpful and we got the form that shows the loss was reported to the police, which is what you apparently have to show to the airline to indicate that you have a good excuse for being without i.d. it's like a very official parental note excusing you from gym class. except different.

after that, we went back to the hotel and got some lunch, which was a buffet that cost $38 a person because some of the main courses were pretty spectacular. except that my mother and i weren't that interested in the main courses, so we paid $38 a person for access to a moderately interesting salad bar and cheese plate. wine was both necessary and extra.

so that's how christmas went down. i'm kind of hoping that, friendly and helpful though the service was, this is the only time i have to spend christmas at a police station. and i hope that someday, someone will be able to benefit from this story, because they'll know what to do when they lose their wallet on a national holiday.

tomorrow, having had this utterly relaxing little interval, i get to go back to work.