mental health mondays :: here to protect you after you need it 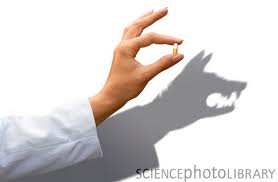 this past week saw a couple of significant "our bad" moments in the arena of  psychiatric medications. while it's somewhat mollifying to know that with persistence, major drug companies can be brought to heel, it's kind of revolting to think of the state that things have to get to before the gears of justice begin to grind forward.

earlier in the week, the u.s. department of defence announced that it will back off prescriptions of the anti-psychotic drug seroquel for servicemen being treated for things like insomnia. as the linked article describes, the drug is linked to irregularities in heart rate, which can and has proved fatal, particularly when combined with other medications. [psychiatric meds are notorious for their interactions with other prescriptions, natural remedies and supplements, even with foods in some cases.]

this move would be a laudable one by the military if it were not for some conspicuously convenient timing- manufacturer astra-zeneca's patent is about to expire, meaning that lower-cost generics will suck away any profit they might have made from continuing to hawk it to the armed forces as a way of dealing with human minds coming unglued in the face of an often bloody and confusing war. if you think that sounds a mite paranoid, it's absolutely nothing compared to the story of how seroquel ended up getting so popular in the military to begin with.

what sticks in my craw about all of this is not that seroquel was prescribed frequently- although the wisdom of prescribing an anti-psychotic to help people sleep is certainly a subject for debate- but that these were prescriptions being given out on an ongoing basis in the field. am i the only one who sees a problem here?

anti-psychotics are not considered a first line of treatment for mental disorders for a reason. they're powerful drugs and, even if you skip the whole cardiovascular issue, they're known as a group to cause some pretty serious longterm problems. although they're becoming more and more common as "add-ons" for depression, anxiety and other problems, it is still roughly acknowledged that something has to be pretty seriously wrong before your doctor starts cracking out the anti-psychotic scrips.

furthermore, seroquel is renown for its ability to knock even the most pernicious insomnia into the middle of next month- which is probably when you'll wake up after taking it. i get where it might seem like a good idea as a sleep aid [if you ignore the whole messing with your brain chemistry bit], because people who have taken it will quickly attest to the fact that the zombification effect that most people traditionally associate with psychiatric meds is a perfect description of life on seroquel.

men and women in the field of combat rely on their focus and on their senses to get them through each and every day. they have access to weapons that can reduce people to smoky outlines and there are groups of them depending on one another's continuing assessment of their collective situation to stay alive. whose bright idea was it to start pumping them full of something that basically turns them into extras from a george romero film? and what the hell else are they prescribing to these poor people? general anesthetics for pain management? giving people medicine when they're in a combat zone is not the same as giving them medicine when they're at home in north america. i'm surprised these doctors haven't noticed the difference, but i'm assuming they're high on their own supply.

maybe now that the government has clued into the fact that feeding these to their military is a bad idea, they can do something about the fact that foster children are being pumped full of this crap like a factory farm chicken getting steroids. or is that expecting too much?

in other news, british pharmaceutical giant glaxo-smith-kline agreed to pay out more than $3billion to settle claims that they marketed three drugs- including the antidepressants wellbutrin and paxil- as doing more than they had actually been proven to do. and for marketing them as "safe for the whole family". in point of fact, these drugs are noted for increasing the risk of suicide in patients under 18, which strikes me as the exact fucking opposite of what an antidepressant is supposed to be doing.

i think that we're all aware that drug companies are marketing their products to use the same way that other companies push deodorant, oil changes and dating sites, which means that most of us are aware that messages aired to indicate that "x may be able to help" are not being done out of a feeling of general good will. however, we're also conditioned to believe that when a company says that a drug can do something, there is some sort of governmental overlord keeping an eye out to determine that there is at least some grounds for thinking that it does that thing. turns out, the overlord takes some pretty epic naps [perhaps he's on seroquel? -ed.] and drug companies take advantage of those lapses to just make shit up that they'd like to be able to say their drugs can do.

i'm glad that glaxo-smith-kline has done their public "mea culpa", but i'd feel a lot better if i knew that the money they're paying back now was substantially more than they'd made by playing fast and loose with the truth in past years. i'd feel a lot better if they were forced to bear health care costs of some of the kids who'd been given paxil [the most detested antidepressant on the market, from my informal research] over the long term, as their maturing brains try to rebalance after mixing adolescent hormone spikes with heavy pharmaceuticals.

both of these decisions point to some deeply troubling realities in the world of mental disorders and their treatment. they point to the fact that often these prescriptions are being written out of context, that the doctors writing them are not taking into account their potential effects, but are simply carrying out what drug companies have told them to do. yes, both of these companies were "caught", but one of them was only penalised when they had basically drained all the profit they could have from their drug.

one of the toughest issues in dealing with mentally ill patients is compliance- getting them to take their medication when they're supposed to, in the amount that they're supposed to. stories like this serve to feed the fears of those who resist taking them and risk dragging treatment backwards.