making faces :: the eyes that keep on killing

July 15, 2012
it can't be interesting for you, the reader to go through all theses blog posts where i rave about armani's eyes to kill shadows and how much i love them and how everyone should have at least one in their house at all times. after all, there are only so many ways i can say that they adhere well enough to last through a nuclear blast, that the use of multiple pigments in the powders means that you get a very nuanced shade on the lid, that you shouldn't be afraid of the sparkle in them, because they're surprisingly forgiving even on *ahem* aging lids. but i have to say that every time that i write one of these reviews because these are very consistent little pots of awesome sauce as well, so you can feel pretty safe choosing the colour you like best and assuming that you're going to get all the benefits attributed to its brothers and sisters.

and the fact is that i wouldn't have to keep writing these reviews if armani didn't keep releasing such new and beautiful additions to the line. but they do and as long as they do, i will keep waxing uncreatively about just how lovely i think they are.

most recently, there have been six new shades released as a summer-into-fall collection in warm tones of gold, plum and rose. this collection is called "acqua", which makes about as much sense given the warmth of the shades as calling the summer collection "bronze", where every shadow was cool and blue-based. i swatched all of them at my local counter and, as if i have to mention it, the chief differences between them will be personal preference. the choice of colours is stunning, the quality is spot-on and the lasting power... well, let's just say i could easily have walked around all afternoon with swatches on my inner arm.

here's a quick phone shot of all the new colours: 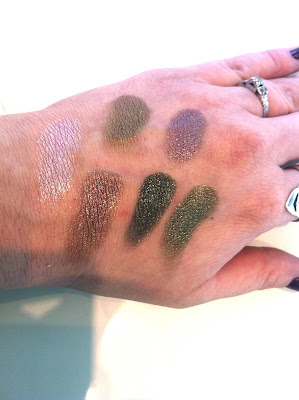 the shades are, starting with the lightest colour and continuing along the top row:

#29 "rose titanium", a frosty mix of cool pink and white that shows as a very icy light pink. like most of the near-white eyes to kill shades, it is a very bright effect. the colour reminded me of the mac shadow "pink freeze". this was probably the easiest to duplicate of any of the new shades.

#26 "rusted gold" which looks greenish in my swatch, but pretty much lives up to its name. all the eyes to kill shades are good, but something about the golds is really special. some have found this is a rosy gold on them, but on me, it was quite a neutral shade with a slight antique patina. eyes to kill #6 "khaki pulse" is similar, although not as warm. if you're a real fan of these colours, you could probably justify having both. if not, you're probably safe buying one or the other.

#27 "oxidised silver" is a pewter-rose mixture that is absolutely stunning. it shows as a pinky-purple- a bit like mac's "plum dressing"- but with a lot of silvery pewter in it. this is one of the shades that shows the formula at its best, because it is very smooth and wearable, but you get the prismatic effect of the multiple pigments.

and in the lower row, starting on the left, we have...

#28 "red platine" was the one from this collection i chose to bring home. there will be more, but this luscious mixture of rosy gold and plum won my heart. more on this below.

#24 "smoky copper" a blend of black, bronze and gold that looks suspiciously like one of the original three eyes to kill shadows released as a limited edition with the 2010 holiday collection. i don't have them to compare, unfortunately, but the similarity in the pan is marked. the colour itself is a breathtaking sooty black with bronze. the shimmer is throughout, never flat, so that the overall appearance is quite warm. perfect for a summer smoky eye with tons of sparkle.

#25 "25 carat gold" is ironically not all that gold, but more a very dirty bronze with a hint of khaki. it reminded me a lot of rouge bunny rouge "abyssinian catbird", which is the only thing that stopped me from purchasing it. i may go back to the counter, catbird in hand, to compare them directly and decided if it warrants purchasing both. i suspect you're safe with one, unless you're a die-hard for khaki-bronze shades.

MORE SWATCHES AND LIVE-ON-EYELIDS ACTION AFTER THE BREAK...

i was also lucky, because my counter unexpectedly restocked eyes to kill #20, "obsidian black seaweed", one of the limited edition shades from their summer collection. i grabbed this one right away, because the blackened blue base with teal shimmer struck me as a wonderful, nuanced alternative to plain ol' black. it really does remind one of the ocean, and the flora wavering in it. i blends perfectly with cooler, lighter shades like "madre perla" or with intense golds like the ones in the "acqua" collection.

here's a quick look at each of the colours i bought- red platine and obsidian black seaweed- swatched dry and wet.


as you can see, there's precious little difference. "red platine" looks more plum in the wet swatch, but i honestly think that's because i touched on an area of the powder where the plum was more prominent.

in terms of comparisons, the texture and finish of "red platine" makes it well different than any other shades i have in my collection. seeing it next to others, i was surprised at how much lighter it looked. indeed, i will say that the shade looks darker in the pan than it does on application.

mac "rose gold" pigment is much more gold and has a smooth, metallic finish. mac "gold stroke" pigment is redder, although somewhat similar, but the lack of sparkle makes them look a lot different in application. mac "sable" eye shadow is browner. it's really the sparkly gold that stands out in "red platine". the final shade really does mix a reddish plum with gold and both are visible in use.

i found the texture of "red platine" to be a bit more crumbly than my other eyes to kill shadows, which resulted in a little more fallout than usual, but it brushed away easily enough. as with all the others, the colour on this one lasted like a champ. it was hanging tight more than eight hours later [in stifling heat] when i removed it. most remarkably, the sparkle does not migrate over the course of the day. what goes on the eye stays on the eye.

the real difference, though, is in what you'll get when you use them. the fact is that my wet swatch of "moonlight night" is far heavier than anyone would wear the shade- it would get all over your face as it dried and the powder loosened. you could build the pigment up a little to get a more dramatic effect, but you'd never get something as intense and it would fade over time, faster than the eyes to kill. [that's not to say that i don't like the pigment- i do- but if you want a look that's deeper and flashier, "obsidian black seaweed" is the better bet.]

"obsidian black seaweed" tends to shift from looking like a blue-black to really catching the light with its teal sheen, which makes it a perfect eye-cathcer. you might not notice its full depth on first glance, but then suddenly, it will reflect the light and take your breath away. [as a side note, why is that considered a good thing? i think that's what killed one of my grandparents.]

and here are my new beauties in action, in all their glory. both are limited edition but still available and both come highly, highly recommended.

i figured that i'd just let the other colours mixed in play on both the golden and rosy-plum tones of the shadow. another nice thing about the eyes to kill colours is that the mix of pigments in them allows you to play with matching it to multiple other colours.

why yes, i did get inspired about this eye combination while doing the swatches for "red platine". i love the gold-teal combination and, heck, why shouldn't i pull out a dramatic look in the middle of a hot summer?

hey, for once i know the source of the image that creeped you out at the top of this post! it comes from here.