July 20, 2012
i was almost going to skip it this week. not out of any disinterest, but i always feel weird posting something flip and cheeky on days when the news is choked with stories of some location filled with people going about their lives suddenly getting shot up by a lone maniac with some sort of personal gripe or agenda.

awful things happen every single day. people who lead otherwise normal lives are suddenly transformed through violence every single day. by the harsh standards of the world, what happened last night in aurora, colorado isn't even close to the worst. i'm sure families in syria would consider a day where ten people died to be better than average. but there is something about these completely random mass shootings in otherwise fairly peaceful places that haunts us all here in the western world. it happened today with aurora. it happened a year ago sunday in norway. it happened in another colorado town, now synonymous with the terror of such a massacre in 1999.

what haunts us is a sense of recognition; it could have been you. we can watch the news from syria and feel terrible and understand that something needs to be done, but we don't identify with it so much, because none of us really expect to wake up and be under siege from our own government.  but we all do things like go to school, or go to the movies, or buy groceries, or just go for a walk in the place where we live and when we see stories like this, it serves as a chilling reminder that, at the most mundane and average moments in our lives, we are still exceedingly vulnerable. and there is little we can do to eliminate that.

and thinking about our perpetual vulnerability, i decided that there was no better time to revel in the small, seemingly meaningless things that make us smile and that help distract us enough from the ugliness that surrounds that we can enjoy the moments of our lives that might otherwise pass unremarked.

here are a few things that did that for me this week...


i want one of these, just so i can wear it to the office and act like i don't understand the weird looks i get.

i'll bet you thought that michele bachmann saying a senior advisor to hilary clinton [and wife of congressional dipshit anthony wiener] was affiliated with the muslim brotherhood [which she erroneously characterised as a terrorist organisation] would be the nuttiest conspiracy the right wing would come up with this week. wrong.

of course, there's also rush limbaugh's theory that the villain of the new batman movie is actually some sort of democratic/ socialist plot. missed that? it's ok, the guy who wrote the original predator wants to bring it to the big screen.

probably the cleverest politician to come out of alaska.


if you're in montreal... get yer butt in gear and come see dj kali [me!] and mr. dna paired with dj tyg for a night of post-punk madness tomorrow, july 21st at the casa del popolo. things get under way at nine and go until the wee hours. conviviality encouraged.

if you're in new york... nars is having a "fall colour event" at the flagship store at 413 bleecker street. if you're a beauty fan, you'll want to check this out [evidence for this forthcoming]. you can call 646.459.2323 to make an appointment.

if you're in krakow... you'll want to check out this performance by theme, a vastly underrated british [although now mostly polish-based] group. front man richard johnson has been a crucial part of the "industrial"/ experimental music scene for many years as a musician, writer/ publisher and promoter. he's forgotten more about music than you or i will ever know and his own work with theme shows both a complex layering of influences and a surprisingly original sound. if someone wants to fly me to poland next week, i'm totally there.


this isn't so much a follow-up as a preview, but i got to take an early look at the nars fall 2012 collection today and let me just say... well done, francois. i'll have a detailed review up over the weekend, but here are a few swatch-shots just to whet your appetite.


i'm seriously going to have to start up a "favourite search term" section of friday favourites, because every week there is at least one term logged in my stats that makes me think either "why did they end up here" or "why were they searching that to begin with" or, most often, both. this week, it was "red lips with sperm". i'm not sure if that's some sort of treatment, or a fad or what and, frankly, there's no way i'm googling it to find out. but i still would like to know why exactly that search term led to this blog multiple times. because i probably have about twenty red lipsticks and if i want to top them with a gloss, i have a lot of those too. no need to resort to dr. dom's home remedy.


we all like getting home at the end of a long work day, but i have to say that mine have been particularly nice, because the second i sit down, or stretch out on the bed, or do anything that involves being less than vertical, i am immediately occupied territory. this is the view... 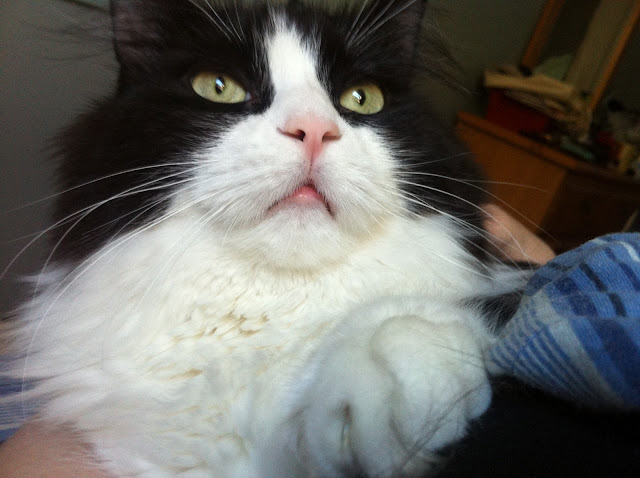 thank you all very much for reading these pages. it means a lot to me to see that there are people who check this space out and i hope that i can encourage each of you to go out and enjoy something wonderful, something that gives you pleasure and makes the world a little less dreary. because we all need that, especially on days when it seems unimportant or inappropriate.

Biba said…
Aww, such adorable fluffy face! And just look at this cute pink nose :)
2:30 AM

morelikespace said…
I'm so glad you enjoy them! Certainly, seeing their cute little faces makes my day, too.
5:59 PM

January 30, 2012
that's right, it's mental health mondays. i haven't done one of these since suspending activity on this front a few months back and i'm still not sure if i have it in me to do this regularly, but we shall see. in the meantime, when i saw that my hero/ girl crush jenny lawson [the bloggess] posted this npr article on twitter earlier today, i couldn't resist resurrecting mhm at least for this week.

it seems that studies have shown ketamine, normally used as an anesthetic by surgeons and veterinarians and [at lower doses] as a party drug by ravers. ketamine is a fairly popular anesthetic because it has a relatively low side effect profile [at least compared to those of other similarly effective anesthetics, which have a nasty tendency to screw with your respiratory system]. in fact, even occasional recreational users are on fairly safe ground, since harmful, long-term damage has been confirmed chiefly in chronic users and addicts. timothy leary experimented with the…
Post a Comment
Read more