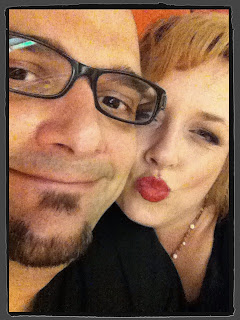 last night was a blast! a big thank you to dj tyg for letting us guest star on her monthly night, because we had a great time. my set was a little more reminiscent of the sets that i used to do at katacombes [i.e., less prone to strange meanderings than what you normally hear at the caustic lounge]. i actually invited someone to the night with the promise "don't worry, it'll be normal". which also gives you an idea of what to expect at the caustic lounge. behold my marketing genius.

mr. dna started off putting the "punk" into the night [which i think technically means i was responsible for the post, which doesn't sound quite so exciting]. i'd say that he definitely had the edge in the bouncy energy department.

many thanks to those who stopped in throughout the night to share in the tunes, the booze and the remarkably tasty nachos and a special thank you to the ska boss who stuck it out until the end of the night and gave our weary bones a ride home.

the next caustic lounge will be on august 1st, so we hope to see you there.


ramones :: do you remember rock and roll radio?
buzzcocks :: what do I get?
descendents :: suburban home
black flag :: nervous breakdown
dead kennedys :: soup is good food
the ruts :: babylon's burning
the damned :: neat neat neat
the smiths :: handsome devil
the plugz :: el calvo y la cruz
minutemen :: this ain't no picnic
therapy? :: teethgrinder
future of the left :: manchasm
lcd soundsystem :: losing my edge
the jon spencer blues explosion :: dissect
the stooges :: down in the street
the white stripes :: you've got no faith in medicine
richard hell & the voidoids :: love comes in spurts