stop me if you'd heard this one before... 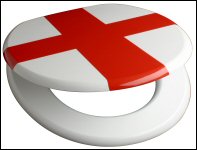 le sigh. ok, if i look at my bracket, i had england getting eliminated by italy in the quarter finals anyway. and even if they'd managed to win today, i think that they would have quickly learned the truth: juggernaut is a german word for a reason. despite the fact that i've been wrong about a lot thus far, i do stand by my initial prediction: i still see germany pulling this one out in the end.

and although i was obviously pulling for england [sorry parents who thought it would be a good idea to bring your children to the pub today for the words you'll now have to explain to them], i'd like to make it clear that i'm not even saying i think my side got cheated. clearly, possession in the game favoured italy and although it was cool to see players like rooney and carroll making great defensive plays, it's also kind of scary when you're relying on players like rooney and carroll to make great defensive plays. being totally honest, i think that italy probably would have won if they'd been allowed to keep playing.

i've held this position for a long time: deciding sporting competitions on penalties at this level is ridiculous. almost no other sport allows it. hockey does, but statistically, goalies win at least half of the time. allowing the best strikers in the world to put on a show is not how these things should be settled. fans pay lots of money to see a game and that's what they should get. a game that lasts until someone scores. let teams make substitutions, let it become sudden death after a certain point, but let people play. that's where the fun is. unless you're one of the players who passes out from exhaustion. but they get paid a hell of a lot of money, so they can really afford great rehab.

bottom line, having a tough game decided on penalties helps no one. both sides today had their heels dug in hard enough that they should have earned the right to keep playing.

if you fancy the spiffy toilet seat shown in the image above, you can buy it here.

Biba said…
I watched the game last night... And I must say, ugh, I'm always so nervous when it comes to penalties.
3:22 AM