June 29, 2012
buh-bye first half of the year! i wasn't sure at first, but i'm beginning to like you more than 2011 and 2010. to celebrate the end of the half-year, i've decided to take some measures to see if i can improve my overall bodily health. well, to be honest it has nothing to do with it being the middle of the year and has everything to do with the fact that i'm working for a company that makes some pretty serious natural health products and being there has reminded me that, while i have a reasonable lifestyle, i am getting to an age where it's really important to give myself periodic tune-ups. besides, i'm one of these people who has to try out the goodies wherever she works.

the process is a little daunting, because while i've done things like juice fasts, i've never done a proper internal work-up with tonics designed to scrub the parts of you that can't and shouldn't be cleaned with a loofah. i can almost hear my liver saying "lady, what the hell is this?" or "i can't believe it's not vodka". i had a quick consult with our naturopath who was very pleasant and helpful and tried to avoid telling me that i basically needed to take one of everything, although clearly someone my age, with my habits and my few but pernicious health concerns who has possibly just been a little neglectful about keeping pretty on the inside [mascara does not work on your large intestine, apparently] needs more than just a few glasses of water and some whole grains.

1. my energy level already seems a little better than it was. [which was terrible this week, to the point where my boss thought i was falling asleep on my desk, which i wasn't, but i sort of understood why she might have made the mistake.] it's a little early to attribute that entirely to my new regimen, but i honestly can't remember the last time i didn't go through huge energy fluctuations during the day. the last couple of days, i haven't.

2. i woke up this morning feeling like someone had punched me in the kidneys. hard. this got better as the day went along and it's possible that i just slept funny but damn. how gunked up is everything that the very act of cleaning is sending me into renal spasms?

i've apparently been way worse to myself than i thought.

so, while i go enjoy my newfound vitality, how about i give you some favourites of the week to peruse?


ever seen one of those videos where a bridge starts waving up and down and doesn't stop until it breaks? turns out you can do that with crowds of people. and it's just as deadly. [link via boingboing]

how marketing people see the world.

hey, remember those "bath salts" things that were supposedly able to make you all crazy so that you'd eat someone's face? turns out that the face-eater only had pot in his system. i guess this means we can kiss any hope of decriminalisation goodbye. stoners, always remember to keep a good supply of the munchies on hand. you're creeping us out a little here.

the only thing that could make a writer sadder than this article is knowing that kim kardashian's younger sisters already have a book deal.


nothing. there is nothing going on anywhere in the world.

if you're planning on taking in the big "spitaly" game, the culmination of euro 2012 on sunday, please feel free to check out my twitter. i'm not especially pulling for either team, so i'll likely just be offensive to everybody. on second thought, maybe you shouldn't follow my tweets. that could get awkward.

and, of course, this coming wednesday is the caustic lounge, our monthly dj night at cagibi. i have a long weekend to spend planning out what i might like to inflict on you play. enjoy a [few] drink[s] and see if my half-assed commitment to moderately improving my health has brought any benefits [or, alternately, if it's made me grow gills].


dom doesn't always think things through. despite the fact that he lives with someone who is constantly slathering herself with sunscreen, he somehow left the house several weeks ago to shoot a video for a fun local group and neglected to put sunscreen on. did i mention that this was one of the first really scorching summer days that we had? because that's important.

predictably, when he got home that night after twelve hours or so of non-stop filming [well, except for the part where the cops came, but there's no need to go into that here], his head looked like something that belonged on a spit at a luau. and yet he seemed happy.

the happy apparently came from the fact that he had a great time with the band and his small but mighty crew and he felt like they'd gotten absolutely everything they needed/ wanted and the video was going to be a great complement to the song.

well this week, the video launched on youtube and you can see for yourself. it is fun and it is a great complement to the [unbelievably catchy] song and i'm very proud of him. also, he didn't catch the cancers from being out in the sun with no protection. everybody wins.


hey, remember that "friday favourites" a couple of weeks ago when i said i'd have the next instalment of "more like space radio" up by the end of the weekend? yeah, neither do i. i will have another show up soon-ish and it is definitely continuing, i'm just not committing to an exact date now.

part of this is because i once again am faced with a wall of blog-log. [that's backlog for blogs, in case you didn't know]. i'm not exactly sure how this happened, but i am overrun with stuff to write about. i have a couple of weeks of "mental health mondays" planned out. i have a ton of beauty purchases to review [along with a couple of other related pieces that i'd wanted to include for a while- colour features, seasonal features...]. i have cat-related posts. heck, i even have a backlog of images of the week! and that's without getting into commenting on any of the political insanity that's been going on up here lately. yes, world, we are canada and we like to keep our wingnuts in government, where we can keep an eye on them.

things need to be written and i'm not writing them. perhaps my newfound vigour will help me clear a bit of that away in the coming weeks.


i'm sure that conquering the backlog and getting my body up to peak efficiency will make me feel like a superhero. unfortunately, our house already has one. 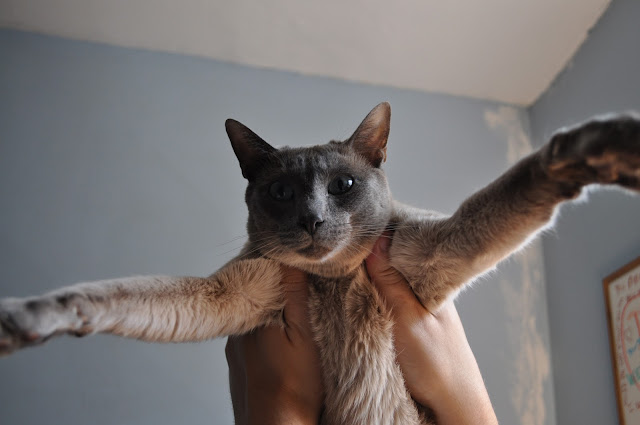 thanks to everyone for reading!!