this post will probably be a waste of your time 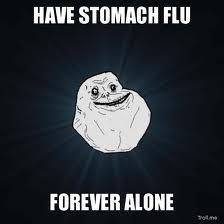 so this has been a real waste of a day. more or less. i actually woke up very early, but that's almost a guarantee that i'm going to waste the rest of the day, because i fall into the trap of thinking that i have lots of time to be productive, so that there's absolutely no problem with me procrastinating.

besides, i woke up early this morning because something had gone terribly wrong with my stomach, which is never conducive to productivity, unless you consider lying around and moaning a lot to be a noble pursuit.

what's worse is that it soon became obvious that something was wrong with all of our stomachs. i don't mean just me and dom, either, somehow, something managed to infect the cats as well. what's more fun when you have a touch of stomach flu than caring for cats with tummy issues? everything.

when you're a kid, being sick means that people are going to be checking on you, waiting on you, offering to get things that you want on a regular basis and just generally giving you a break. when you're an adult and you get sick, it means that the laundry and the dishes will be 24 hours more difficult to deal with. and i'd sort of isolated today to be the day that i did housework because i knew it was going to be the one spectacularly crappy day weather-wise this week.

of course, i had dom to make things better, which he did as follows:

dom :: you're going to have to take care of all of us today.

me :: what? why would i have to take care of everyone? i'm sick too. i'm the one who woke up sick at dawn.

i think he mentioned at that point that i'd probably want him to sleep on the sofa tonight, which really just shows that he wasn't thinking clearly. i'm feeling unwell. why would i want to get up and go into the living room to stab him in his sleep when i can do it from the comfort of bed?

in the meantime, i'm trying to take a little pride in the few things that i got done today. for instance, i did remember to update "a definable moment in time". so go read that and forget what i said about stabbing someone in his sleep. or i'll have to find you and stab you. when i'm feeling better.