the people on the bus go round and round

May 24, 2012
there are a number of ways for me to negotiate the space between my home and my office. the fastest is the spiffy new express bus line, which is what i've taken in the mornings, but in the evenings, i've been more lax and have ended up taking the "scenic" route, or rather one of two scenic routes, which go through different areas of suburban industrial parks, although one does pass by the fairy castle, which kind of counts as scenic. if you're into gaudy fairy castles.

today, i specifically left on time to catch the express bus home and, like any normal person, i went to the stop on the opposite side of the road to where i disembark in the morning.

anyway, after bouncing around the intersection for twenty minutes and consulting the stm's mobile app, which refuses to even acknowledge the existence of the express bus if you ask it to plan a route for you and tells you the southbound stop has been moved WITHOUT TELLING YOU WHERE when you search the bus route, my phone's gps tells me that the southbound stop [although the bus is really going east] is actually the very same stop where i arrive in the morning, going north, which is really west.

bottom line, i spent way too much time sitting in the sun, watching a lot of buses go to places i didn't want to go until, on the advice of my phone, i got on the bus at my morning stop, which is theoretically taking me even further away from home with every rotation of its tires.

i'm sort of hoping that the bus eventually stops somewhere, if only because i'm sure i'll eventually need to pee.

in the meantime, at least i scored a seat.

oh, and dom just texted to ask if i was waiting for the rain to stop. below is a picture of the sky where i am. obviously, i'm not getting home any time soon... 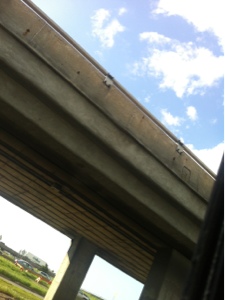