making faces :: my life as an easter egg 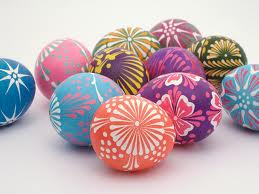 sometimes, the answer to "what colour should i wear today?" is "all of them".

after all, we live in the era of plenty as far as wearable colours are concerned. when it first occurred to ancient civilisations to rub stuff around their eyes to see what happened, their options were pretty limited. the egyptians, men and women, rich and poor, lined their eyes with kohl for effect, but also for the same reason baseball players do- they noticed that it cut down on the glare. for the romans, who developed a slightly wider palette, it was an aesthetic choice enjoyed by the upper classes and, once again, it wasn't gender specific.

what's odd is that most histories of eye makeup end there, or jump from there to the 1950s when beauty pioneer helena rubenstein started marketing blue shadow to young women apparently unaware of the fact that blue shadow can be trickier to wear than a lot of colours because of its tendency to emphasise dark under-eye circles. it's as if eye shadows were unchanged from the time of the roman empire to the time of doris day.

possibly, of course, it's that a few bad experiences led women to stop agreeing when their chemist asked them to smear something on their eyelids to see how it looked. you only have two shots to get that wrong before you're well and truly screwed. but for whatever reason, there seems to have been little improvement in the basic formula for a surprisingly long period of time. not that women weren't wearing eye makeup, of course, there just wasn't much in the way of colour.

SEE HOW THINGS HAVE CHANGED...

now, we've conquered every possible colour. there are shadows in all the shades of the rainbow and beyond. there are shades that look as matte as crate paper and some that shine like liquid metal. there are some that glitter and some that change colour depending on the light. and they work best when you combine them in different ways, to accent different features and subtly shift the focus of the onlooker in the direction you want.

the multi-coloured easter eggs so prominent at this time of year have a likewise muddled history that seems to begin with ancient zoroastrians [based in modern-day iran], who painted eggs for their new year's celebration, which took place at the vernal equinox [where it logically should be -ed.]. somehow, and we're not a hundred percent clear on this, this clearly pagan tradition managed to make the leap [kind of like a bunny...] to the christian world and persists in all its multi-coloured glory to the present time.

of course, with the dawn of spring, it does sort of make sense to shift to a palette of many colours, since the world seems to be doing it at the same time- buds, first flowers, shoots of grass- it's all a bit of relief after a very long stretch of grey. 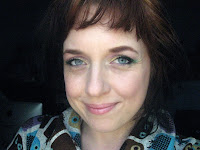 so this is a little something i threw together with those things in mind, realising that if i'm going to use my own face as a canvas, i might as well take a chance and see how many different shades i can fit on at one time before it all looks like mud. 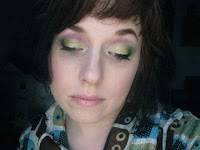 the key with this sort of thing seems to be blending. or rather not blending, because some of the shades [particularly the green and purple] don't look all that nice when you mix them, plus they lose their impact when they're softened through blending. so doing this was mostly an exercise in tapping colour in the appropriate spot and then very delicately smudging them a little closer to one another.

i'll apologise up front for the fact that almost everything i used is no longer available. mac and their limited collections are becoming a wee but overwhelming... [they're releasing three on thursday.] 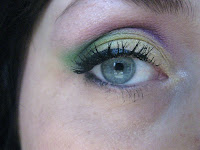 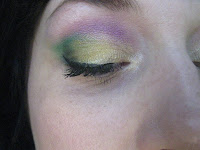 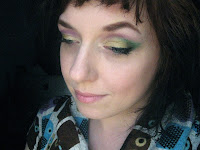