things i learneded on the teevee 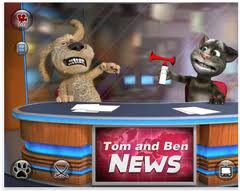 i've come to the conclusion that i may be watching too much news television. how much is too much? i woke up with the cnn "election 2012" intro music stuck in my head. i find it fairly difficult to fall asleep without having a news channel on to soothe me. [however, dom doesn't want me listening to al-jazeera before sleep anymore because it gives me nightmares. which makes me feel like he's treating me like a child and makes me want to get all "mind your own business" on him, except that he's right, al-jazeera before naps has given me nightmares, twice, which have resulted in him having the living crap scared out of him when i suddenly started screaming really loudly.]

i guess those things wouldn't be problems in and of themselves [except for dom. and possibly the neighbours.], but i'm concerned that all of this news television might actually be making me more dumber. seriously, i think there are some pretty dubious things that could be learned listening to watch you hear on the news. here are a few choice morsels.

1. endometriosis is caused by being a slut. or by being "round-heeled", which is a sort of old-fashioned way of saying slut. although it seems like very few people i know have heels that aren't rounded. cube heels and triangle heels would probably freak me out a little. and buying shoes would be tricky.

2. it's very easy to confuse canada and north dakota. both are in the north, have lousy winters and low population density. and chances are that most conservative staffers can't find either on a map.

3. all north american elections are run by robots who call your house and tell you what to do. also, no one cares enough about my vote to bother having robots call me.

4. if you live in america, now is probably not the time to get a job working for a christian scientist.

5. if you're pregnant, you should be required to have an ultrasound only if you're planning on having an abortion. ultrasounds aren't important if you plan to keep the baby, because you'll know what it looks like soon enough.

6. if you give a stupid answer in any situation, the acceptable way to deal with it is to claim that the way the question was asked was deceptive or confusing. can't wait to try that out in job interviews. or with dom. or, really, in any situation where i say stupid things, which is a lot of them.

i can't wait to see what i learn next...