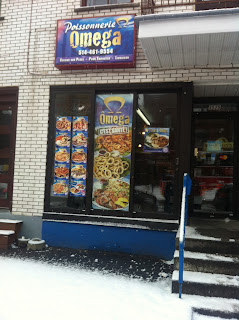 a few weeks ago, my friend martin [also], a devout foodie, took me out for lunch to help kick my ass out of an end-of-year kind of depressive slump. somewhat bored with options both in our own neighbourhood and in the plateau [which is where we often end up], we settled on finding something in cote-des-neiges, crammed as it is with eating establishments of various sorts, most of them highly affordable.

we ventured down lacombe street, which certainly has its fair share of places and were thinking of going to frites alors. while that would have been fine, it did sort of defeat the purpose of getting out of a rut if we ended up going to a different location of a franchise where we had eaten many times before. so martin suggested we check out "the fish place next door". as a maritimer, the idea of eating fish in a non-ocean-adjacent city at a place that looked a little dive-y had me nervous, but i figured that it was at least something new.

upon entering, while the place definitely had the decor of a shish-taouk takeout, i was surprised to a selection of fresh fish laid out for us to choose from. far from a fast food joint, the presentation was more like a specialty market. the menu was not huge- it had between half a dozen and ten selections- but it was certainly less generic than i was expecting.

martin ordered a fish and chips, while i went with the calamari- basic staples, yes, but ones which are often poorly prepared.

the gentleman behind the counter set to work, battering and frying the fish/ seafood himself, illustrating that the counter display wasn't just for show. most times you get fried fish, you're getting something that's been battered and frozen, then just tossed in a fryer as a finishing touch. at omega, you're getting the real deal. 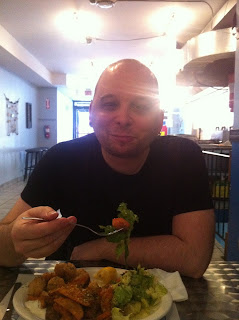 most surprising to me- the seafood snob- was that the fare was actually really damn good. my calamari were perfectly cooked, which is rare. a lot of times, calamari are served too soft/ mushy [undercooked] or become rubbery [overcooked]. as ubiquitous as they've become, they're remarkably finicky to work with.

martin's fish and chips [haddock] were amazing. the crust had a perfect crunchiness to it, while underneath was a perfect fluffy batter and delectable fish that almost melted together. the fish was not overbreaded and everything was moist without being mushy- the sort of delightful texture that most places fail to achieve.

as you might expect from the decor, omega is also budget friendly. dishes range from $8.95- $16.95, some permanent and some daily selections. they're also a fish market, so you can take some of those tasty-looking catches home with you to cook later.

omega is as unpretentious as it gets- there is a small number of tables, no liquor license and a restricted menu. it's not the kind of place you're going to want to take someone for a first date. but after you've gotten to know each other and you'd prefer to enjoy each other's company over some tasty, hearty food, then this is the exact sort of place you're seeking.