December 30, 2011
i came across this article on the bbc yesterday, which you can read, or i can summarise thusly:

it's about scientists in england tickling animals as research.

ostensibly, they're researching how laughter evolved and while i'm sure that in some cases, laughter is indeed the best medicine, i have a feeling that this will not help them cure cancer any time soon. i'm trying not to be judgmental, because damn, the videos are cute, but it does raise some questions for me. 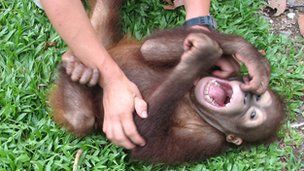 first of all, i don't need scientists to tell me that animals are ticklish, because i have arthur and the few times i was daft enough to try to brush his belly fur, he demonstrated in no uncertain terms that he was not into it. he used to play this horrible prank of rolling on his back and showing said belly as a temptation to touch him, but it was actually just a horrible trap that resulted in the loss of a few friends. [meaning they stopped visiting, not that he killed them. as far as you know.] it was several years before i mastered the technique of rubbing him with enough force that it didn't tickle and from there, things were much better. so yes, animals can be ticklish and, like a lot of humans whose name starts with kate, they aren't particularly fond of being tickled.

second, i'm not sure where i should stand on this issue with regards to animal research. after all, i'm opposed to animal testing and i try to advocate for alternatives wherever possible. and technically, this research involves little except animal testing. but when i think of the sort of things i oppose, giving hugs and tickles isn't really what i had in mind. i mean, the whole point is to study the evolution of something that indicates happiness. well, laughter can also indicate nervousness, i guess and maybe there's a second study involving placing a rat and a new mate in an enclosure with his previous mate and twelve of their babies where they see if he starts to titter, but i haven't read about that one yet. so i'm not sure if this really meets the definition i had in mind for animal cruelty.

third, i get the feeling that people who went into the sciences are just constantly thumbing their noses at those artsy fops who decided to do things like comparative literature or philosophy degrees, the ones who didn't want to be restricted by the regimens of science. now, all of a sudden, all those guys who were rushing to their labs in university, while we snickered at the fact that we had half the class work that they did are getting back at us by demonstrating that they can come up with jobs that are cooler than we ever dreamed of. "you ended up working in an office? haha, biatch, i tickle animals for a living!"

i'm never going to have a job that cool.