December 03, 2011
yet more photos of the montreal metro system taken by yours truly. today, we're looking at the blue line, the often forgotten line that runs between n.d.g./ snowdon in the west and st. leonard in the east. since it services an area outside of the downtown core, a lot of people never get to see anything of the blue line and, indeed, it runs less frequently and closes earlier than other lines. however, it also passes near the city's eponymous university, which means that it basically serves to connect thousands of students living close by with the rest of the city. also, as the areas of rosemont and mile end becoming increasingly [achingly] hip, this line is playing more and more of a role in moving montrealers from place to place.

this is snowdon station, the western terminus of the blue line and one of two connecting points with the orange line. snowdon holds the distinction of having some of the poorest lighting on the network. i constantly feel like i'm squinting. 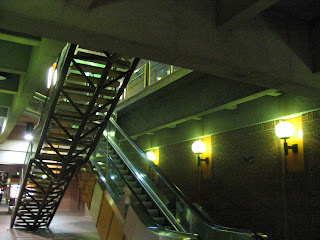 this is, um... well... let's see... ok, it's on the blue line and i believe it's l'acadie. i can honestly say that i've never seen the outside of this station and, in fact, the only time i've been in it was to take these photos.

the station is in a sort of an odd place because l'acadie boulevard itself is an odd place. on its eastern side, you have the impoverished neighbourhood of parc extension, crammed with semi-derelict buildings and often home to the city's poorest immigrants [from many countries], as well as the remains of the old greek community [those who haven't moved to the northern suburbs in laval]. on the western side of l'acadie- literally the other side of the street, is the plush community of mont-royal, the most affluent borough in the city, populated by w.a.s.p.s and the jewish elite, most of whom are anglophone. in case the contrast wasn't evident enough, the residents of mont-royal have erected an imposing barrier fence to drive the point home. there are a couple of points of entry, which have always struck me as existing solely to allow access for nannies, cleaning ladies and gardeners to their places of work. 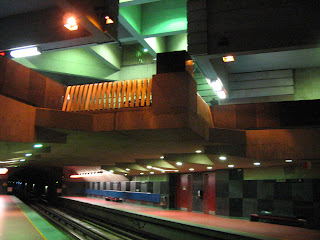 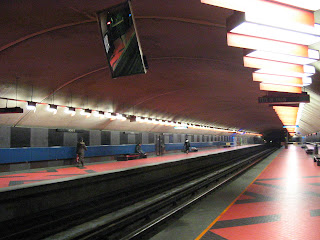 parc station is, appropriately enough, located in an old train station. it's one stop that's worth seeing from the outside. parc is located on the southern border of the aforementioned parc extension, where it abuts the hipster enclave of mile end. 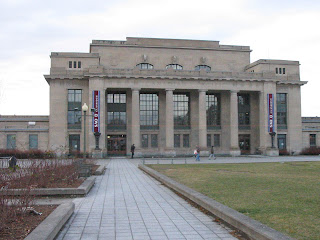 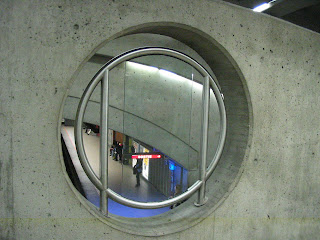 jumping a few steps along, we have jean-talon station, the second point where the blue and orange lines connect. i like how they've blended that into all aspects of the design. the main reason to go to this area, if you don't already live here, is to visit the jean-talon market, which is open year-round but really comes alive in the summer, when the local produce vendors descend en masse. being adjacent to little italy, there are lots of nearby cafes and bistros run by people who normally speak four or five languages without an accent. the main challenge to exploring the neighbourhood is actually getting out of the station. although there's signage everywhere, jean-talon is a frustrating maze and, even when you follow all the signs, it's perfectly possible to become lost. and, of course, there are many, many points of entrance and exit, so you're never quite sure where you're going to pop up. 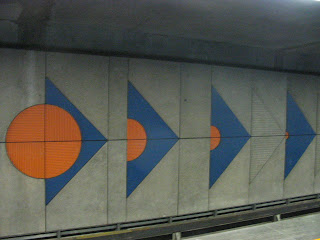 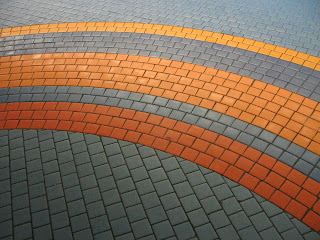 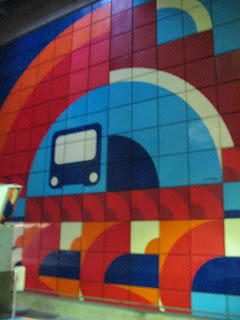 i have well and truly forgotten where this was taken. oops. 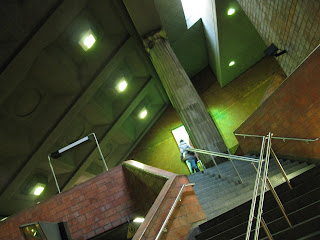 this is fabre station which, when seen under the influence of intoxicants, can make you feel like you're hallucinating. or so i've heard. 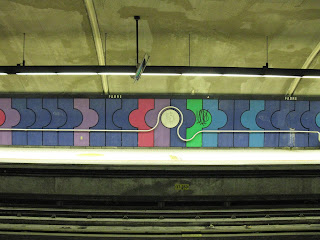 these next two come from st. michel, the eastern terminus of the blue line. this seems an appropriate point to interject that the city really should have taken full advantage of the possibilities and extended the line much farther east. in the years since the line was built, that part of the city has become densely packed and transit service there is pitiful. for that matter, the line could have been extended in the west as well, allowing it to connect with the western campus of concordia university. but no one asked me. 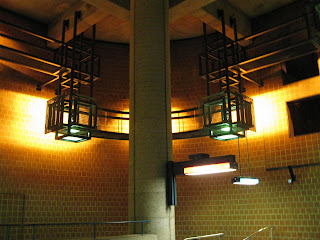 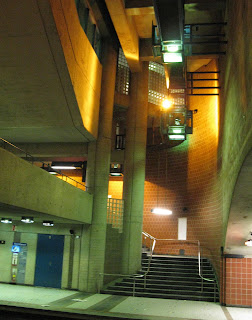 below is the stained glass installation from the otherwise nondescript cote-des-neiges station. although i have more photos to share, this was actually the last one that i took, because, having done all my work, i discovered, to my frustration, that i'd completely forgotten cote-des-neiges [which is doubly embarrassing since it's not all that far from where i live]. the station itself suffers an air of neglect and seems almost like an afterthought. it's odd, considering that it's in the heart of montreal's most densely populated neighbourhood, a mix of first and second generation immigrants from all over the globe, university students and members of a long-established jewish community. 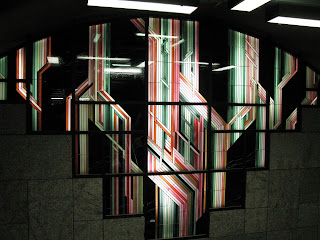