December 02, 2011
ech. in case you haven't heard [or read] that expression before, that is my word for when something makes me feel cranky and old. like this chest cold is making me feel right now. dom, sweetie, it was really nice of you to think of giving me something early for christmas, but really, you shouldn't have. and so i have spent the better part of the day today sitting in bed, slurping lozenges, watching new networks and encouraging the cats to keep me company.

luckily, i was mostly feeling fine for the rest of the week [can't say the same for dom] and was able to enjoy some of the little pleasures that life has offered.

before i get started, can i just say that i think it would be a mistake to write herman cain out of the g.o.p. reality show? sure, he started off as just a minor character with a catchphrase ["9!9!9!"], but he's really come to be one of the most entertaining cast members. i still think that there's lots the writers could do with him. and let's face it, building the whole story around that romney character was probably a mistake. it's hard to stay interested in him when the others all have the great script moments and are so meretriciously entertaining.

the ugly truth :: it's hard to find anything good about this week's revelation that the northern ontario reserve of attawapiskat called for help four weeks ago because a large number of residents were living in conditions that would be expected in somalia [if somalia routinely got frigid winters], but i do take some solace in the fact that the media is focusing on the deplorable conditions on many native reserves and that prime minister has more or less been forced to show the iron fist inside his lead glove. his initial reaction to questioning by liberal leader bob rae was to shrug off the problem and say that the government had spent $90 million in five years and hadn't seen the return on investment they'd wanted.

after a day of questioning and disturbing imagery from the reserve and after, one assumes, that harper's handlers advised him that equating human beings with components of a stock portfolio made him look like satan, he changed his shrug from indifferent to alarmed and started screaming that he wanted to know where the money went. no, dumbass, we the taxpayers want to know where the money went and it should be pointed out that knowing where government  money goes is part of your job description. you can huff and puff in the house of commons as much as you want, but, as opposition leader nycole turmel pointed out, the question is why no red flag was raised in the five years that money was apparently being delivered by the truckload [if we're to believe harper's chracterisation] that things weren't working out. no one said anything until the red cross moved in as they would in a war zone earlier this week. stephen, you got into power originally because the public was appalled at revelations that the liberal government had spent millions of dollars with advertising companies in quebec and then couldn't account for what happened to it. if it's wrong for them to do it, it's wrong for you to do it.

as much as harper obviously wants us to believe that we should hate the natives for taking "our" money and spending it on... well, on something and then coming to cry for help, i think that this  embarrassment has the potential to stick because the truth is ultimately clear: harper and his government knew what was going on. they knew how much they were spending and they did nothing to fix things until their mismanagement was "outed" by the red cross and the media.

you can read a good opinion piece from the globe and mail, written by native author richard wagamese, who points out that both the government and the assmebly of first nations were derelict in their responsibility and are now trying to throw blame at the feet of the people who are living in temporary shelters. my one quibble with the piece is that i think he skips over a third culpable party: diamond giant debeer's, whose botched sewage system at a nearby mine caused many of the reserve's houses to become unlivable to begin with.

oh and here's a video from 2009 talking about the same reserve's fight after harper's conservatives killed funding for a new school. [spoiler alert: the only school was torn down in 1999 after it was finally determined that a 1979 diesel spill was indeed responsible for the fact that students there kept getting sick. whoops.]

harper, you may think you can pull the wool over all of our eyes by trying to sow racial mistrust against the natives by blaming them entirely for their own misfortunes, but many of us are realising what the people of attawapiskat have been saying for years: something stinks.

feel good inside and out :: this one's pretty simple and you may have already heard but beautybloggers.org is having an auction of cosmetics, fragrances and other beauty products to benefit doctors without borders. the auction runs until monday december 12th and the items you can get are often rare and quite spectacular, from prestige brands to cult favourites.

animal magnetism :: from cringe-worthy to creepy, awkwardfamilypetphotos.com reminds me why i sometimes think that my cats are plotting to kill me after i've forced them to pose for photos with me. [except simon, who would pose for photos with an anxious skunk if he had the opportunity.]

and since the season is upon us, you might also want to check out sketchy santas for some christmas cheer.

to wind things up, i thought i'd also give a quick look at some things that have been in heavier rotation recently from my makeup drawer[s]. and yes, i do actually keep track of what i wear, because i like to see if everything is getting used [especially since less useful items from mac can be returned and magically transformed into shiny new useful things] and not at all because i show signs of o.c.d. no matter what dom says.

for the eyes, i continue to love my mega-metal eye shadows from mac. i bought a bunch of them back in january when they came out and i really hope that this is a formula they bring back. they're very shimmery, but much smoother than traditional frosts. i feel like mac peaked early this year, because i haven't been as impressed with anything else. they're great shades that have a bit of dimension, go anywhere and blend quickly and seamlessly. 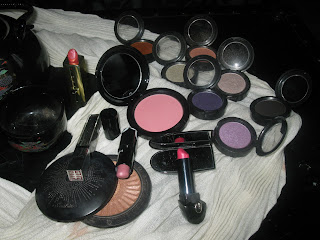 i continue to get a lot of use from the guerlain terra inca radiant powder that came out this summer [see my original review here] and i've also been favouring mac's "oh so fair" which came out with last year's "venomous villains" collection. the colour isn't villainous at all, actually, but rather a very natural pink that imitates the flush of youth and innocence that i lost around age twelve. i'm pleased to see that it's still going strong over a year after i purchased it and at less than $30, it costs a lot less than surgical or chemical procedures and attracts less unwelcome attention than bathing in virgins' blood.

i do tend to spread the love very evenly around my various lip products, but for those who might think that my tastes run chiefly between more purple vampy lips and more red vampy lips, it might surprise you to know that i quite often look pretty understated and that the most commonly used shades in my lipstick collection over the last little while have all been fairly light pinks- guerlain's "fuchsia delice" rouge g, "cherry blossom" rouge automatique [also guerlain, reviewed at the same time as the terra inca powder, linked above] and benefit's mod squad. i originally reviewed that shade here, but i have to say that, in retrospect, i was overly harsh. the grittiness that i felt originally went away after a couple of uses and now i'm left with a very easy to wear cool natural pink. here's for giving things a second chance.

and, although i tend to neglect glosses a bit [not opaque enough!], i have been giving some love to givenchy's gelee interdit in "celestial black" [review here].

and finally, it wouldn't be friday favourites without a feline send off so here's a little sleepyhead trio... 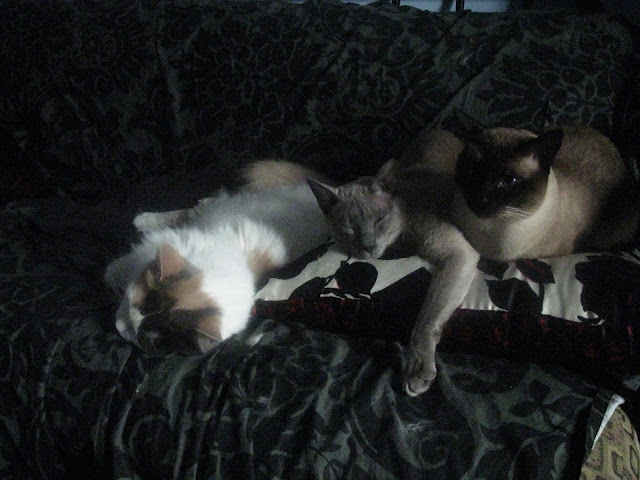