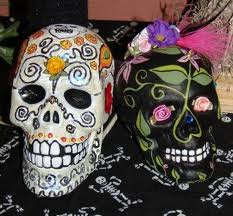 here's the playlist for the "all souls day" edition of the caustic lounge. i have to say that this was a particularly "anything goes" night, since both mr. dna and i were winging it. dom brought some serious old school punk rock grit, which left me wondering what the heck to do and i'd like to thank martin rouge for his sage advice: "look in your binder, go to the third page, choose the disc in the upper right hand corner and play track three". that, it turns out, was as good a way to start a set as any.

because we've generally been running longer than our allotted time anyway, we decided to do slightly longer sets each, rather than relying on the second person [in this case me] to do an extra forty-five minutes or so at the end of the night. the jury is out on whether or not this worked better than what we normally do, so perhaps next time we'll defy expectations and actually stick to the official schedule [on at 9, off at midnight] and see what people think.

until then, here's the caustic lounge extended remix...