September 01, 2011
there is a prevailing wisdom that makeup is seasonal, that the colours one wears should change with the waxing and waning of the sun, that certain looks are more appropriate to specific times of the year, in the same way that certain clothing is. while i find it both pointless and frustrating to follow rules [you're colouring your own face for crying out loud. surely you're allowed some creative license], i will concur that there are certain looks that look a little better at one time of year than another.

i touched on this previously, when addressing the pain faced every spring by women [like me] who tend to go for the deep lips and smoldering eyes that require a a lower light level to really work [and by "work" i mean "not scare people"]. but now, as summer starts to fade, it's the time when we can rejoice. those whose comfort level runs a little more towards neutral and who feel best in the pastels might be a little nervous, but, really, there's nothing to be scared of. [except zombies. you should always be scared of zombies.] smoky eyes can be done in a variety of colours, even lighter ones, so that you can have the effect without the full-on drama. [i already talked a lot about smoky eyes.] deep lip colours can be blotted down to give a stain and eye liner can be smudged with a small brush or finger to gift a softer look. so, much like you start out wearing sweaters before pulling out the jacket, you can work yourself into the season.

personally, though, i'm kind of happy to be pulling out the burgundies, plums and berries [great, now i want pie] from their hibernation in my makeup drawer. so i thought i'd share a few looks that i'd been sporting recently that have a distinctly autumnal flair. 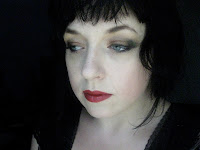 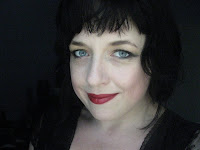 one of the reasons i've fallen arse over tea kettle for nars cosmetics in the last little while is the fact that so many of their names relate to cultural touchstones for me. sure, it's not going to make me buy something i don't want, but if i have the choice between two beautiful eye shadow sets with a rich rusty mahogany and a deep cedar green and one of them is called "rust & green redux" and the other is called "blade runner", i can tell you for certain which one is coming home with me. actually, though, there isn't another set quite like this one in terms of either quality or colour. mac has some singles that are close to the individual shades, but not exactly duplicates. and i find the quality on these particular shades especially high, even for nars. and, although it's a part of their permanent collection, there is something about the "blade runner" shadow duo that just screams autumn to me. perhaps it's the fact that the shades do kind of resemble a deciduous and coniferous tree side by side on a fall day. and combined with nars' "night porter" [another one of those cultural touchstones for me], they make a lovely, dimensional and unusual smoky combination. 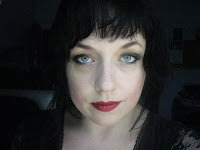 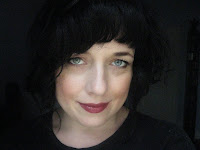 one of the reasons i was a little underwhelmed by mac's latest collection was because i felt it was a pale imitator of couple from autumns past. take for instance 2008's "cult of cherry" collection, which was a real symphony of smudgy, smoky eyes and deep, ripe lips. although there did seem to be more of a focus on the lips for the collection, the three eye shadow quads continue to be sought after to this day. of course, they also continue to be available through ebay and swap sites, sometimes at very good prices. 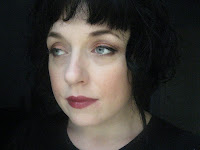 most prized of all seems to be the "spiced chocolate" shadow set. to be fair, this one is has some fairly similar colours in the regular mac line, so you don't need to feel too badly if you can't track it down [or don't want to pay higher than original retail for it]. i think the reason its so popular is because it goes well with pretty much any eye colour- dark eyes will appear warmer, green and blue eyes will appear brighter- which is always a selling point. 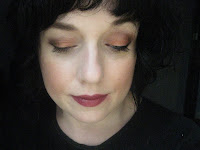 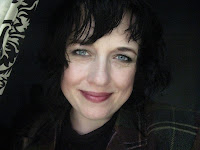 "tempting"
this is actually a look done with another one of the eye shadow quads from the "cult of cherry" collection, the one featured in the promo image [see the non-wimp above]. it's that bright pop of chartreuse among the neutrals and browns that really makes this one so distinct, which is why it sold out when the collection was initially launched. however, even more so than "spiced chocolate", there are colours in the regular mac line that come pretty close and it's always avaliable on ebay. so you don't need to feel too badly about the missing out on it. 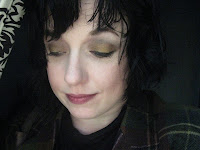 i also went with an intense lip colour blotted for this look, since i was wearing it during the day and the original shade is pretty intense even in the more subdued august light. 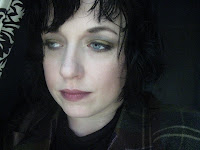 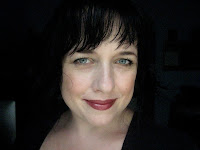 this is a quick look using primarily products from mac's 2010 fall collection "fabulous felines". although it's generally a little more muted than "cult of cherry", i found that the products had a wider range. there was plenty there for ladies who didn't want to go around with lips visible from three hundred metres away [whoever they are]. anything cat-themed is immediately going to interest me, even though the theme really related more to the imagery used and the naming of products, since most cats are adorable enough that they don't need mascara and blush to make your heart flutter. nonetheless, everything here was of such great quality that you could feel pretty comfortable buying anything from it. or everything from it. which i almost did. 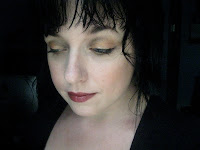 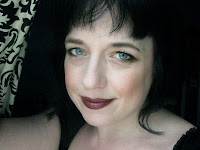 there is, of course, nothing saying you can't use summer colours in the fall. in fact, a lot of what makes a look seasonally appropriate is the combination of shades you use, rather than just one single piece. so the predominant colours in this look actually come from a couple of mac's summer 2011 collections [reviewed here and here and still available in some locations and on line] which are perfectly fall-like when used here.

the lipstick is one of several [one used in the "spiced chocolate" look above, actually] that came out with bobbi brown's 2010 fall collection ["black velvet"], all of which are still available as part of her permanent line. i feel like her darker lip shades don't get nearly enough love, since she's better known for subdued neutrals and pinks. the deep, rich fall colours she has are fantastic and the formulas of both her regular and "creamy" lipsticks are wonderfully soft. 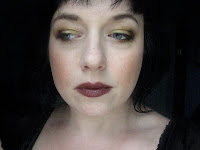