if it's customer abuse, it's gotta be bell 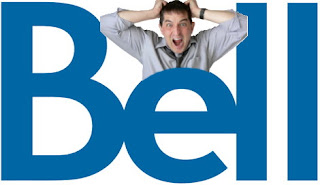 ooh, i can barely contain my giggles. i have finally settled (somewhat) my year and a half long battle with bell canada over the fact that they left my previous phone line connected for three months after i moved, tried to strong-arm me into paying for their mistake, accused me of breaching a contract when i left for another provider and insisted that the onus had been on me to request a copy of said contract, although they had never informed me of its existence. i can't get back the hours of my life i wasted on the phone being subject to verbal abuse while i tried to get this cleared up. it is some minor comfort to know that at least i am not alone. witness this tale of horror from someone who merely tried to contact bell with a billing question.

of course, if you've followed news in canada lately, you'll be aware that i'm not alone at all. in fact, it looks like this sort of behaviour is actually part of bell's customer service strategy, at least if you take the word of the 10,000 people who've complained about their telemarketing practices. you'll note in the article that the crtc- probably third behind bell canada and wal-mart on the list of organisations i'd like to see blasted into outer space- basically dispensed with the complaints by giving bell a slap on the wrist compared to the fines it's doled out for lesser offenses to smaller companies. (although it claims to be driven purely by the volume and content of complaints, the crtc has a history of establishing precedent by hammering on the little guys who can't afford to fight back. but that's another story.) apparently, the crtc don't take it very seriously that the principal abuser of the country's "do not call" list is the corporation they entrusted to maintain it in the first place.

through all this, i continue to get the most melancholy, heartfelt form letters signed in the name of vice-president steve bickley, mourning our long-standing past relationship and promising me, as abusers often do, that everything will be well again if i just come back. and, while i haven't been cursed at by any of them, i do receive calls from telemarkters on a somewhat frequent basis (although it does seem that their efforts are flagging), attempting to woo me on bell's behalf. honestly, the whole nightmare has grown so bizarre that i actually look forward to these calls, these opportunities to explain calmly that not only am i never returning to bell, but i am encouraging everyone i know to leave them for greener pastures. i get a sadistic sort of amusement from the fact that bell has provided no script or tips whatsoever to their telemarketers to deal with customers who left not for financial reasons, but because they were just so aggravated by bell's miserable customer service that anything looked good by comparison. with at least 10,000 complaints on the books, one would hope that mr. bickley has his little elves working on a cheat sheet for that.

personally, i think that if bell wants to impress people with its customer service and responsible actions, it should start by not calling people who don't want to be called, not wasting paper by sending out form letters and by keeping track of those who have left out of anger and frustration, rather than because they were offered a better deal somewhere else. i also think that, given bell's increasingly dodgy record on all counts, that the crtc should be keeping them on a lot shorter leash than what we've seen.

rather get trapped in the horror of addressing the crtc directly, you can request that bell be subject to higher scrutiny by reaching out to industry minister tony clement. his contact information is pretty comprehensive (no cell number, though). you might want to remind him that his government is already dragging their feet on long-promised telecommunications reform and that letting bell operate at a lower standard than smaller competitors is a step in the wrong direction.

if any of you are in the same boat as me, getting unrequited love notes from steve bickley and you're ready to let him know that it's never going to happen between you, you could always try contacting him directly:

whatever part of this seamy corporate thuggery you object to, the one thing that i encourage you to do is object loudly, consistently, articulately and politely. bell has been able to get away with a lot of things because they are big compared to you, the individual. but when stories of thousands of irate customers (and would-be customers) start surfacing, the time has come to call their bluff.

[note :: the graphic that accompanies this piece was something i found originally in an article from the montreal gazette. the article, which is itself an interesting piece on bell canada and includes (in the comments) reactions from current and former bell customers.]

LILYisatig3r said…
Alright, so I'm not 100% in the same boat as you are.. but I'm a neighboring boat in the US.

I am about ready to pick up a bazooka and blow T-Mobile to smithereens. Back in October, my friend signed up an internet account under my name & social (totally different issue, anyway..). Well most cell phone companies here require you return the product within 14 days if you wish to cancel without penalty. Remember that, without penalty..

Well she returns it about 12 days after purchase, was told everything was canceled and she didn't have to pay a dime! Dandy, eh? Well a month later, I receive a bill stating I owe $60 bucks. I'm like, thanks but no thanks, I call in and explain the situation. I'm told, it'll be fine, we'll take care of it. Absolutely lovely!

Another two weeks roll by, I get ANOTHER letter, this time with a total of $100 or so. I'm saying to myself, alright, this makes sense how? So I call, AGAIN, and I'm finally told they don't have proof of the return we did in-store. My friend has a copy of the receipt, so I'm like hey, go in and tell them whats up please. I'm told over the phone with T-Mobile's customer service that as long as she brings the receipt in to the store within a month, they'll credit everything. So we go in, the guy calls into customer service himself (the customer service rep at the store), says we're good, and we leave thinking everything is peachy.

ANOTHER two weeks, and I get another. damn. bill. Let's summarize this part. It's now almost February, and I've had to call in about fifteen times, talk to five million different people, and the most recent bill I've gotten is a collection letter stating I'd better pay the last $15 bucks or else. So I call in.... again... for the upteenth time, and say, "Take this shit off, or I swear to God..."

Now I'm normally a nice person. Really nice. But when I've had to do this multiple times, a human being can only handle being bugged constantly for so long.

morelikespace said…
i'm with you! break it all down and start over!
7:47 PM