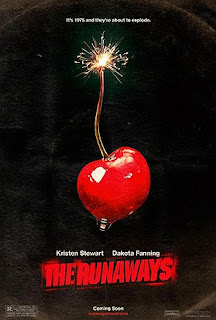 it's amazing how your perception of things changes when the words "free pass" are dangled in front of you. i admire the band the runaways, even if their music isn't a hundred percent my thing. i'm always interested in movies set in the early moments of the birth of punk. and floria sigismondi, who chose this film as her feature directorial debut, produces breathtaking visual art, as well as some of the only remaining interesting music videos being made.

that said, my interest in seeing the runaways was mild at best. i hate biopics as a rule. the story being told is one that's been on the big screen dozens of times. (band forms, ban succeeds against odds doing what they want, cue problems with drugs and booze, cue acrimony and break-up, finish with someone acknowledging the importance of the experience and gazing reflectively upward.) and, most hideous of all, the lead role of joan jett is being played by kristen stewart, the chick from twilight.

however, those magic words "free pass" just get me. i figured, at worst, i'd get a few laughs. at best, i figured it would be fun and visually arresting.

visually arresting, it turns out, is an understatement. from the very first image of a few drops of blood on a los angeles road, sigismondi grabbed my attention. she has lovingly recreated the glammy, seedy look of the seventies, from the fashions (and including what seems to be a visual hallmark for her- multiple close-ups of shoes), to the decor, to the cars on the streets. at times, the look is so perfectly copied, it runs the risk of looking a little too costumed, but most of the time, it simply serves as beautiful adornment for the action.

as far as the action is concerned, the plot doesn't really have any surprises. the runaways were a girl band formed largely under the direction of punk impresario kim fowley. they were raunchy, played their own instruments and rocked as hard as the boys. they did drugs, fought and finally imploded in the way bands will. sigismondi, who also wrote the screenplay, wisely chooses to accord little importance to the typical moments of this tale and focuses more on the emotions and bonds of the characters, especially sex kitten lead singer cheree currie and jett. the script never wallows in the drama, it lets you see the humanity of the moment and moves on.

to emphasize the focus on the characters imbued by sigismondi the screenwriter, sigismondi the director constantly shows them in stark close-up, everything around them gyrating and blurry. at times she seems pushed up so close to their faces that it's uncomfortable to watch- you feel like an intruder. in fact, the camera becomes almost expressionist in function, communicating what is inside the minds of the characters, letting the viewer see what these women see.

the danger of using such restraint in the story and of thrusting the actors front and centre is pretty clear: you'd better have some damn fine actors, or your film is going to redefine the word boring. and that's where things get a little surprising.

for dakota fanning, playing cheree currie is her coming out party. no longer the spooky-looking kid, she gives currie a perfect balance of worldliness and naivete. cheree takes on the role of jail-bait tease with the joy of a little girl allowed to play dress-up in her mom's best clothes. she has the elements of girl and woman, but falls into neither category. fanning is all wide-eyed curiosity and confused teen sexuality put simultaneously under a spotlight and a microscope.

fanning is great, but kristen stewart is a knock-out. everything in her performance radiates passion, determination and intensity. when we see her approach fowley for the first time, basically having nothing to offer except the idea of an all-girl rock band (that doesn't yet exist), she is as subdued as she gets, but there is still something compelling, something that makes the audience believe that the flamboyant, grandiose punk scenester can see something in her. when stewart is on the screen, it is virtually impossible to look at anything else. even in the film's few weak points (for instance, the scene where she goes to try a guitar lesson and is faced with the predictable "girls don't play electric guitar" from the teacher), she is magnetic. on the strength of the two lead performances, the film crosses from being a solid entry from a first-time director to a truly excellent piece of work.

it's been many, many moons since i was as impressed with a film as this one. it manages to overcome all of the things that typically make me sneer at biopics. it's also been eons since i saw two such plum roles for women. it seems that women are increasingly relegated to the roles of waif and mom, with no dimension at all, at least in any pictures coming out of the united states movie machine. this is a very different sort of vehicle.

i'm glad that the gift of a free pass convinced me to give this one a try. i'm considering paying for a second viewing.
Reactions: