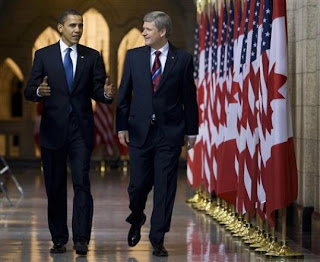 since no one else seemed inclined to mention this, i'd just like to call attention to a little fact about barack obama's brief sojourn to canada last week. he met with prime minister stephen harper and leader of the opposition michael ignatieff, which means the meetings involved two men who believed (although i don't think either of them still do) that the current war in iraq was justified and necessary and one man who didn't. guess who the odd man out is? hint: i shudder for my nation.