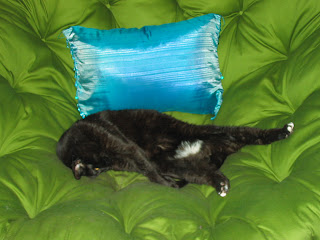 it's been nine months since i lost morgan, my little feline companion of almost nineteen years. i still think about him pretty much every day. thinking about him still makes me cry sometimes, such as this past weekend, when i was playing with a kitten whose behaviour reminded me uncannily of him.

however, my remaining felines have served notice that the official mourning period is at an end, that a crucial bridge has been crossed.

within the last couple of weeks, both of my cats have started climbing into what was once morgan's chair and napping. for almost nine months, neither of them would touch it. arthur, my elder cat, slept under it, but neither of them would raise a paw to its surface. now that's changed. i'm not sure why, but the invisible barrier has been pierced and now there is frequently a cat- it alternates which one- in the chair.

it both warms and pierces my heart seeing them in there, but i think i get the message. they'll always be climbing into HIS chair, but at least they feel comfortable doing so.
Reactions: