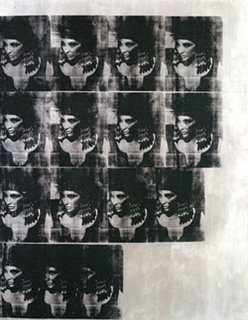 despite being mired in construction, the art gallery of ontario soldiers on, continuing to offer big-name exhibits like supernova a retrospective of early- to mid-sixties works by andy warhol, curated by david cronenberg. there's a lot of potential in this, given the various talents involved, but for some reason, it just doesn't come together.

the exhibition has great focus- images of sex, death and icons exclusively, exploiting a subconscious link between all three- but the focus means that it is fairly limited in size. that doesn't bother me- i'd rather spend my time viewing fewer works in more detail- but the fact that the exhibition has been promoted so heavily means that there is a large crowd stuffed into the two rooms allotted.

it doesn't help that the museum staff seem like they are there fulfilling a community service portion of a prison sentence. "do you want these or not?" is not the way to ask someone if they would like to use the audio guide for the exhibit, people. (i don't like audio guides, because i don't like walking through an exhibit feeling like i'm on my cell phone.) but even beyond that, and this is surprising, given the attention focused on the celebrity curator, the exhibit itself seems poorly organised.

my initial inclination was to give the ago the benefit of the doubt and assume that the look they were going for was a new york loft from the sixties- an open, stripped down setting, cluttered with art. but it's also distinctly possible that these are just the two rooms they could stick this in, with no frills, owing to the construction that's being done all around. even within the two rooms, there seems to be no discernable logic to the order of the pieces (perhaps i should have used the detestable audio guide) and, most bizarre, cronenberg chose to exclude warhol's films almost entirely from the exhibit. (in fact, probably the most interesting piece in the exhibit is the series of "screen tests" by stars of the mainstream and underground, where each sits, silently, in front of a camera for four minutes, trying not to look uncomfortable with the artificiality of the situation.)

it's a good enough experience for the warhol enthusiast, but other may be left wanting a little more.