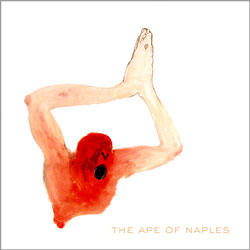 this is it. this is the last coil album ever. capping off more than twenty years of consistently creative, groundbreaking music is the ape of naples. and what an ending to a glorious career.

the material on this album was drawn from recordings made over an extended period of time (including some dating from the sessions intended for their long-promised, never-delivered international dark skies album for trent reznor’s nothing label), but, as they have done before, coil are able to present a series of unrelated tracks and make something that is stronger than what most artists release as albums. how do they manage this? it’s their own sweet secret.

musically, the album is a fitting memorial to the band, encompassing elements of many of the styles that they have explored, while still remaining strikingly fresh and original. they’ve even stolen some bits from previous releases and dusted them off for a final curtsey. the fragile and lovely sound that graced the two volumes of musick to play in the dark is heard early on. the rawness of their first release, scatology, finds a responsive echo through the years. the debauched cabaret vibe of love’s secret domain is reflected in a track like the tattooed man... whatever a coil fan wants to find, there is something of it here. i would not go so far as to say that this is the finest coil album (i’d have a hard time telling what that was anyway), since i find that there are no tracks that individually have the strength of the whole (part of coil’s genius was always being able to provide brilliant albums populated by tracks that were separately just as brilliant). but it is beautiful.

of course, reviewing this album poses a bit of a conundrum: is it possible to listen to this music without reading into it the life of the artist behind it? there seems to be a pervasive melancholia throughout the music. would it seem less sad if jhonn balance were still alive? quite possibly. balance, a desperate alcoholic while alive, often wrote about death, addiction and depression, but his lyrics unquestionably gain poignancy in the light of his own premature death.

on its own, ape of naples would be remarkable, a subtle and mysterious masterstroke from a group who seemed capable of fathomless creativity. taken in context, it is a remarkable testament to a group who continued to use their creativity, despite the fact that they could easily have rested on laurels garnered early in their career. coil are officially put to rest. the world is a little quieter, a little sadder and a little poorer for it.

available from distributors stateside like soleilmoon or direct from threshold house.