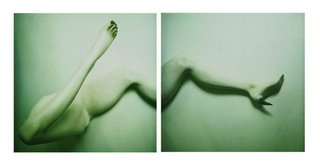 walter benjamin wrote that before we had the capability to create copies en masse, that an original work of art maintained an aura because of its status as the unique and singular piece and that the ability to reproduce art and distribuute it eroded the status of the original.

i mention this because i went to see a book launch for canadian artist floria sigismondi and i'm convinced that you could develop a parallel theory about artists. sigismondi's work, even the pop music videos she's produced, has a dark and dusturbing quality to it, without being overt, that appeals to me. seeing her speak, however, seems to undermine this.

for starters, her speaking voice, both in tone and inflection, is almost a dead ringer for madonna's. it's a comparison i couldn't get out of my head the entire time i was listening to her. i kept thinking she was going to start plugging her new album...

secondly, her answers, while honest, are strikingly ordinary. which is probabaly the case with any artist, when asked about what inspires them or how they work. the fact is that there is probably no way of defining the mysterious quality that makes a piece of art appealing and anyone who attempts to do so is going to sound either a) pretentious or b) like they're talking about something that really isn't that special.

if i thought about it, i could probably produce a list of artists who are capable of speaking about their work while at the same time maintaining their aura of mystery, but they're few and far between.

i'm happy to go and see exhibitions by any number of artists, but i may think twice about hearing them speak about it. somehow, i'm happier thinking of people who produce this type of thing as being a little detached from the rest of us.