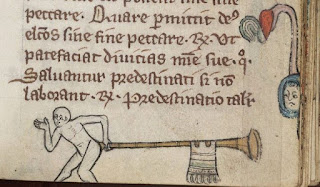 in order to help deal with the anxiety that comes from moving, unpacking and everything else that has been going on in the last few weeks, i've put a little time into my continuing study of genealogy. this is an ongoing process for me because i'm ultimately determined to find out how i came by every single strand of dna in my body. but it's also a regular, calming activity that chiefly involves data entry into an extremely large tree. my discoveries in recent weeks have been enlightening but they've brought to my attention the rather peculiar practice of nicknaming that was common among my ancestors [and probably yours too].

i understand the need for these nicknames. back in those days, every family seemed to have about six names that they used, so, if you were talking about your cousin john, chances are that there were at least eight or nine individuals who fit the bill. furthermore, since everyone was marrying their cousins and producing children that bore a striking resemblance to everyone else in the family, and no one in the landowning class [the only people whose records have been preserved] had any kind of job to use as a reference point, you generally had to identify people by something specific and memorable.

in my family history, like a lot of others, those points of identification were often related to an anomalous fact about their appearance. for instance:

'the towheaded' - referring to someone who was so blond as to appear almost white-haired. there are a number of those, in different branches and different generations, and i imagine that a number of people with scottish/ scandinavian ancestry have a few 'towheaded' people in their past [or present], but apparently it was good enough to distinguish from among sixteen people named harold at the family reunion.

some of the nicknames were pretty swell: 'the great' [alfred, arnulf and charles] or 'the wise' [yaroslav]. others have meanings that probably made sense at the time, like 'the black' or 'the red'. hair, maybe? and others were used to describe those people who did things besides riding around on horseback killing others, such as 'the abbott' or 'the mayor'. for some reason, abbotts and mayors didn't seem to require other nicknames, but kings did.

the carolingian kings of france, from whom i'm directly descended in about fourteen different ways [if you have any european blood in you, chances are charlemagne banged a distant relative], were prone to giving everyone who occupied the throne a sobriquet. for instance:

pepin 'the short' - that seems a bit rich, considering that most franks were just a little over five feet tall, and the guy was a king, but it's not nearly as bad as how his grandfather-in-law got labelled...

in fact, there are several names related to physical appearance that aren't very nice at all.

"crook nose"
"speckled" [i'm guessing that means "freckled", but they picked the worst possible way of saying it]
"the bald" [there are several notable bald men in my family history, apparently]
"white leg"

and some of the nicknames seem pretty bad ass:

"the outlaw"
"the battler"
"the haughty"
"the venomous"
"the fratricide"
"the bastard" [not the only bastard in the family, in any sense]
"bloodaxe"

while others are sort of wimpy:

but one in particular stands out among all these names:

the easiest assumption is that the offending word didn't mean the same thing then that it did now, but geoffrey chaucer used the term to mean exactly what it means today in the canterbury tales", so the fact is that "fart" has meant "fart" for centuries.

this raises many questions, none of which are answered in historical texts. the man was king of a large tract of norway. he was part of the oldest line of scandinavian kings, who ruled in both sweden and norway for hundreds of years. he was supposedly killed by a fucking warlock who blew the unfortunate eystein off his boat.

and yet, he is remembered for... i mean, how bad could this thing possibly have been that it eclipsed all else that he did in his life? it's not even as if he's remembered as "the farter", like he used to toot his own horn as a party trick or something. the name implies one singular explosion that blew every other accomplishment out of the water.

so thank you to my great great great something grandfather [or grandfarter], for justifying my sense of anxiety that people will only remember the embarrassing, stupid things i did when i'm gone.

as for the rest of you, who want to seek out the strange secrets that lie in your family's past... you probably shouldn't.