May 31, 2016
at some point, i fell behind on reviewing new members of the nars audacious lipstick family that i'd purchased and never recovered. there are a few that i have picked up since last i blogged about these remarkable lipsticks, but i've just not prioritised them, because they're not new and shiny anymore. [behold the beauty blogger at her consumerist worst.] but i am making myself go back to these because:

those are all good reasons, but i specifically felt compelled to review the newest of my acquisitions, because i felt like it was the answer to a rather difficult colour analysis question: what does a bright season neutral look like?

bright seasons are those whose main requirement is saturation and clarity of colours. normally, that's associated with bright shades and, truly, the bulk of the shades that will suit people with these complexions are bolder, but what if you want to do something understated? what if you want to do a smokey eye and would prefer not to look like an extra from the "addicted to love" video or like your lips decided not to go with you when you left the house? neutrals tend to achieve their neutral-ness by incorporating either brown [autumn] or grey [summer], neither of which will be flattering on a winter/ spring blend.

surely i don't need to specify that, in a line of lipsticks inspired by goddesses of the silver screen, "brigitte" is named for brigitte bardot, the iconic post-war symbol of femininity and sexuality. marilyn monroe might be better known, especially in north america, but bardot is the more complex character. simone de beauvoir said bardot was the first liberated woman of the post-war era, on the vanguard of women's transition from the home into the broader world. bardot was the original "sex kitten" [as in, the person for whom the term was coined], but she was also a serious actress, nominated for numerous awards. she made a name for herself starring in fluff comedies, but she also worked with the likes of jean-luc godard. arguably still at the height of her fame, she retired from the screen in 1973 and has never returned.

beyond the screen, she is no less a contradictory figure. for decades, she has been an outspoken advocate for animal rights, confronting national governments about the slaughter of seals and dolphins and donating hundreds of thousands of dollars to animal welfare causes around the world. [the sea shepherd conservation society has a boat named for her.] in 2008, she characterised then vice presidential nominee sarah palin as a disgrace to women, particularly for her opinions on climate change and gun proliferation.

on the other hand, she has been convicted five separate times for inciting racial/ religious hatred, specifically because of her views on muslims. her most recent husband [who she has been married to for over twenty years] is a former advisor to jean marie le pen and she has expressed sympathies with the national front's anti-immigrant stance. she has derided gay men for being too "showy" about their sexuality, while still claiming that she was sympathetic to their cause since she was "entirely surrounded by homos".

so with all of those complications bound up in one woman, is it any wonder that nars "brigitte" is something of a paradox? it is a light neutral shade, the kind that she made popular and the kind that symbolised a sort of revolt against the more conservative deep reds of the forties. the age of bardot was the age when cosmetic companies began expanding their colour range, eventually shades that were frosted to make them as light and shimmery as possible, miles away from the shades worn before and during the war. but, as might befit a blonde bombshell, this is not a brownish or muted nude, but a clear peachy pink. it isn't one of those difficult to wear white-based pinks, either, but one without a hint of brown or grey that still remains understated and wearable anywhere understatement is required- work, court, or with dramatic eye makeup.

so from the paradox that is brigitte bardot emerges a lipstick shade that is a paradox as well: the perfect neutral shade for a bright season.

trust me, i've tried a lot of neutrals and i like many of them, but i can tell they aren't perfect on me the way that bright pinks or berry shades almost always are. this lady is the exception. she never leaves me looking washed out, but is never competes with stronger colours elsewhere on my face either. like so many men in the 50s and 60s, i am completely enamoured of brigitte.

given that bright season neutrals are rarer than hen's teeth, i'm not surprised that i didn't have a match for this in my collection already. hourglass "fawn" is warmer, glossier, sheerer and more muted, but it's the closest thing i could come up with. nars has done an amazing job with these shades overall and this one tops the list in terms of uniqueness. 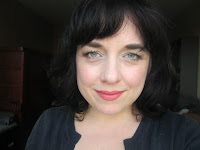 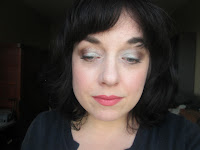 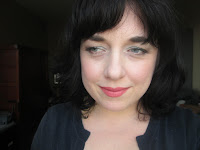 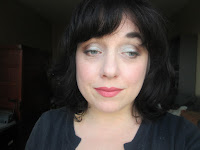 on the eyes, i'm wearing  armani eyes to kill shadow in "madre perla" and nars dual intensity eyeshadow in "pasiphae". i don't know why, but i got kind of obsessed with putting these two together. i think it had to do with the fact that they each have a green sheen, despite the base colours being quite different. i dunno, i think it works. i also have urban decay "smoke" eyeliner on there.

so, while "brigitte" may not be new, she is still groundbreaking, no matter how soft or [heaven forbid!] ordinary she might look at first glance. i think this would be a nice colour on many, many complexions, but if you're someone who always seems to look better in brights, but who still wants something subdued, you must give this lady a place in your collection.

Unknown said…
Great post! And those colours are to die for, I have the Nars lipstick and was looking at the Hourglass Fawn, thanks for clarifying the differences :)
3:03 AM