i' took a bit of a break from mental health mondays this week . as a not-quite-follow-up to last week's post, as well as to a few other posts i've done about my adventures in language learning, i thought i'd share with you some of the knowledge that i've managed to acquire.

the first, and probably most important thing, is that i'm incapable of doing anything in moderation. a desire to learn a bit of german expanded quickly into speak all the speakables. i'm still trying to focus primarily on learning german and spanish, but i've also started to incorporate french lessons, to improve on what i already know, and i've very tentatively been dabbling my fingers into the italian, polish, dutch and even welsh pools, just to see if there are any there that i want to pursue. clearly, moderation in new interests is just not my bag. or tasche.

since writing has always been associated with both learning and working [in every sense], i've also taken the time to create a little language notebook for myself. sometimes, i feel like it's helping, like just the act of writing the words or the rules helps lock them in my memory. other times, i find myself looking at my vocabulary list and wondering what i meant by "ma-but". [i could explain that for you, but i prefer to maintain the aura of mystery.]

learning languages is a great way of making myself think about how we communicate and of bringing myself in contact with new and lovely words, which makes it a creative as well as a practical aid. i'm sure i'm not the only one who thinks, for no logical reason whatsoever, that certain words just look or sound much nicer than others: the spanish ¡peligro! with its double punctuation, seems much more urgent and exciting that "danger!"; "thank you" will always sound very pedestrian to me now that i've encountered the polish dzienkuje; and i don't think that hearing someone say "please wait" will ever sound as polished and professional as someone who says bitte warten.

one of the things that's surprised me is how much this feels like exercise. think foreign words look difficult to pronounce? your mouth thinks so too. it turns out that foreign languages are chock full of sounds that you have never had to make before, but without them, you'll be haunted by the idea that you're not really speaking another language. if you're like me and getting the accent as close as possible matters to you, you'll probably be surprised that working on those surprising new sounds will make your throat, lips and tongue ache like they were lifting weights. don't worry. it only seems kinky at first.

i've taken up mumbling away to myself in different languages to help get the phrases and the sounds to stick [and also to keep people from hanging too close to me in public] and i'm happy with the knowledge that i've managed to pick up. i like to think that some day, i'll have the opportunity to travel and try some of these out. then again, some of the things that i've learned don't seem like they'd be the most useful conversation starters.

i mean, part of this would almost be useful if some wealthy sponsor or patron decided to take me to see an opera or orchestra. but i think my host would have second thoughts about being seen with me if all i could manage by way of conversation was to talk about how many people were or wanted to be touching the flute. [how can something with no adult language sound that sleazy?]

i'm not quite sure i can picture how i'm going to slide this next one into casual conversation:

i mean, clearly i know the circumstances that would occasion such a statement, but i can't say as i've ever used it in english, and i've been using english for a long time. is this really the sort of information someone would need? what is the scenario here? am i standing outside the door or stall just hollering this at them? is it a game of charades gone horribly awry?

there are some that are just clearly silly:

lions don't live in spanish-speaking countries. where would he have learned????

seriously, who on earth would use that? 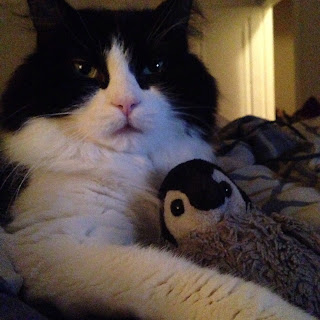 i do like to check out bookstores when i travel, and since i'm trying to learn languages, maybe there are some types of books that would be interesting and helpful to me.

no. that is not what i will be saying.

food is a big part of every culture, so i'm not surprised that it's one of the first things these lessons teach. it's useful for being able to scan a menu, of course, but it's also something that makes for fairly easy conversation. everyone has food that they like or dislike, so when you have to make conversation, you can always default to talking about what you like to eat at home.

if you need to push on from that point, blanco is white and marrón is brown. that should keep things lively for a while.

when meeting strangers in a foreign land, or those visiting, it always helps to be able to tell them something impressive about yourself. you have a phd. you're a popular crime author. you ran a marathon last year. you know, you want one good thing that you can fall back on, that will make people remember you. i've chosen this one for myself:

i think that once they know that about me, anyone i meet will be honoured to have me tell them when they're on the toilet. perhaps they'll even let me touch their flute.