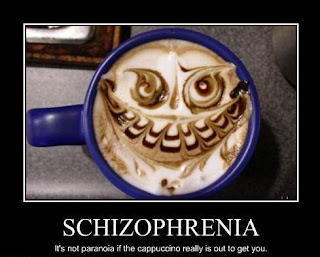 last week, while i was stuffing my face with pierogi [monday night has seemingly become pierogi night at our house] and watching electoral returns, i had not one but several people call my attention to one of the 'trending' pieces of news on facebook: major new research had been published that pointed to a new theory as to the cause of schizophrenia.

clearly, that's pretty exciting, because schizophrenia is like the shit cadillac of mental disorders. it's the one most likely to land you in a hospital or in prison. it's the one most likely to wreak havoc with your life. and it's the one that's hardest to treat, because all we've learned about it over decades of studying is that we know nothing about it. in fact, it wasn't so long ago that we posted a piece here on mental health mondays that looked at numerous possible explanations for what schizophrenia is and how it develops. what emerged in the last ten days is just one more of those theories, which is not to deride it, but to state the truth: being new might be exciting, but that doesn't guarantee that it's a breakthrough. determining that takes time.

you can read the research for yourself right here, in the magazine in which it was originally published. since it's in a scientific journal, much of the writing is technical, but it boils down to the fact that our own brains may be unwittingly responsible for making us schizophrenic. one of the many, many hobbies that your brain has is gardening. it prunes itself of synapses that it isn't using so that everything stays nice and orderly. as we pass from adolescence into adulthood, it engages in quite a substantial trim and the research that was just released indicates that it may end up eradicating certain synapses that it needs to protect itself from malfunctioning. afterwards, things get unbalanced and signalling starts to go awry, which we experience as the positive and negative symptoms of schizophrenia.

in its favour, this new theory has a number of positives:


the bad news is that now we have to do more research. and most of that research won't be in order to build on what's just been released, but to repeat it. that's because the single thing that separates good from bad science is that, when you use the same conditions, you can produce the same results. so even if this science is golden, it will probably be many years before we find a drug that will address the concern. until that time, we're likely stuck with more or less what we have now: drugs that address the symptoms but not the disease. [which means technically that we treat schizophrenia in the exact same manner that we treat a head cold.]

i feel like i'm the bearer of bad tidings here, but i'd prefer to be thought of as the great manager of expectations. this research is a big deal, but it's principally important to the work of other researchers, at least for the time being. if we want to see results that stem from this work, we need to make sure that governments and private corporations are funding further research along these lines. that's the tricky bit.