mental health mondays :: the long and the short of it 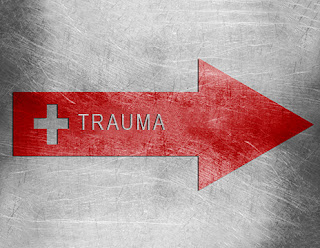 welcome, everyone, to week two of our look at post-traumatic stress disorder. last week, i posted an older piece i'd written about the condition by way of introduction. this week, i wanted to look at the peculiarities of the two broad types of ptsd. as i mentioned, there is a school of thought that believes that these two should be treated as separate but related conditions, because, while both are the result of trauma, their effect on the individual and their outward appearances are often quite different from one another.

the first, and most clear-cut type of ptsd is what used to be known as "shell shock", first observed as a clinical condition among soldiers who had fought in world war i. in this form, ptsd is a response to a potentially life-threatening situation, or that at least carried the threat of grievous and imminent bodily harm. there are a number of ways in which the condition can manifest after the victim is returned to normal life, but there is frequently stress associated with the memory of the event or events in question. the trope is of the war veteran who becomes dissociative and believes he is back in the jungles of vietnam and who can return to normal with no recollection whatsoever of what they've done while in this fugue state.

however, that sort of reaction is incredibly rare. most of the time, the person is well aware that they are haunted by the incident or time in question, they just might not realise that it is having a profound effect on who they are. or they might, but it's left them so shattered that they can't muster up the will to care what it's doing to them.

chances are that this sort of ptsd is marked by intrusive memories of the stressful incident- which can be combat, but can also be things such as rape, being attacked or robbed, being in a serious accident, etc. the sufferer may develop habits of avoidance, going out of their way not to see, hear or do things that remind them of what they've been through. someone who cheated death in a car crash might refuse to get in a car. a rape victim might go to some lengths to avoid the area where the crime occurred. this is something that happens to all of us to some degree, but in the traumatised person, these reactions become acute.

this sort of ptsd is generally something experienced by adults. that's not to say that children cannot go through these sorts of things, because they absolutely do, but their experiences can hover between the first and second subtypes of ptsd. the sufferer is usually able to put their trauma into some sort of context, but may be unable to appreciate the power it holds over their lives.

the second type of ptsd is that which is observed in children who have undergone abuse. given their age and level of development, children who are physically, sexually or emotionally abused aren't necessarily able to distinguish that what is happening to them is traumatic. they may know that it hurts or terrifies them, but they don't know that it isn't normal, or that they aren't to blame. most often, those inflicting the trauma are the ones who would normally be expected to provide context that would allow the child to process the trauma [which wouldn't necessarily prevent them from shifting from the second subtype into the first].

one of the chief differences between the forms of ptsd is the method that the victim deals with them: adult/ acute trauma sufferers tend to adopt strategies of avoidance; they stay away from things that trigger memories, even when those things make their lives incredibly inconvenient, or they avoid discussing the problem in the hopes that it will make it go away, or to deny its importance. sustained/ chronic trauma sufferers are more likely to accept what is happening to them because chances are that they can't avoid it. instead, they find ways to adapt to having the trauma in their lives: becoming exceptionally quiet or withdrawn, becoming violent themselves, self-medicating with drugs or alcohol, or developing dissociative disorders. it can be more complicated to address the effects of trauma in this case, because the trauma itself might be well hidden, even from the sufferer. [as we saw in a mhm post back in december, the symptoms might not even be psychological. children who suffer trauma have to deal with the release of an ocean of unhealthy inflammatory substances that actually damage their physical development.]

along both of these things fall under the umbrella of ptsd, there are increasingly questions about whether or not they're the same thing in terms of how they should be treated, particularly when it comes to medication. sharp force trauma and a third degree burn are both grievous injuries, but only one of them should be stitched up. we're limited by the fact that we are still very much in the leading-up-to-the-first-date stage of our relationship with the human brain and because we're still living in pretty much the first generation to be able to discuss mental illness with any kind of openness.

if you think that you might be suffering from ptsd, there are several very good questionnaires here that might help. these are clinical tests, but in order to make a diagnosis, they need to be administered by a qualified professional. that said, there's no reason you can't take the quizzes and then bring them to your doctor if you think there's a problem.

there is one more part of this post-traumatic mini-series to come, which relates specifically to childhood trauma: the twin phenomena of amnesia and recovered memory. that'll have to wait for next week, though...