music to my ears 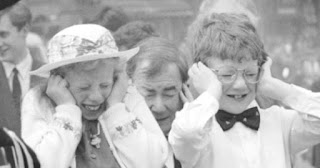 one of the main things i will remember about 2015 is that it is the year that music once again took a role of primary importance in my life.

well, that's not quite accurate. it is the year that new music once again took a role of primary importance in my life. it's not like i'd drifted away from music in the last few years, but i'd spent a lot of time rediscovering classics and tracking down things i'd heard about, but had never managed to get my ears on.

there are two important developments that lead to this change, which were:

what makes those two things especially important is that now, new music finds me without any more effort than it takes to click a link. it is vitally important that i have a system for discovering music that conforms to my policy of sloth.

so for the first time in several years, i thought i would share some thoughts on 2015 in music. my taste may not be for all, but i think it's for some and the fact that a music-related post was the most viewed one of 2015 must mean that some of you have ears that are just as perverted as mine. this isn't a "top ten" because i find it difficult to compare releases that are far apart in sound. and yes, as much as my interests are "niche" [i.e., unpopular], there is considerable variation.

hearing new music has meant hearing new bands. but a number of them weren't just new to me. 2015 seemed to produce a lot of very interesting debuts.

mad masks :: s/t
every time i put my music on random and this album crops up, i stop what i'm doing and pause to think, "i really like this". the label write-up describes them as kindred to 80s-era 4ad, but i find them to be more like a hybrid of the poppier edge of early coil and 80s-era clair obscur. another point of comparison would be attrition, which should perhaps be no surprise, since the record was mastered by martin bowes. there is a catchiness to their creepiness, which channels a raw retro dark vibe, but there's something new going on here that i definitely like.

of earth and sun :: uncoiled
i got a taste of this one on soundcloud about a month before it came out and i knew right away that i needed it. and it did not disappoint. processed voice, bone trumpets and electronics create a remarkably deep symphony of anguished sound. i cannot wait for his next album. seriously. when i finish this i'm going to kidnap him and lock him in our storage room until a second album is ready.

am not :: unpunished
sometimes, a girl just wants to rock out with some nice power electronics. but other times, what a girl wants is to rock out to some nice power electronics that's a bit more subtle than a lot of other stuff coming out in the genre these days. there's a pressure cooker kind of restraint at work here and i'm curious to hear what comes next. although industrial music has always been preoccupied with exposing the ugliness that underlies the world's thin varnish of civility, much of the political content amounts to little more than liberal-baiting drivel, which makes it refreshing to see someone take on a topic that really does reveal the horrors of which humanity is capable: the belgian occupation of the congo under king leopold ii.

[i'm cheating a little by calling this a debut, because am not have had material out before. but this is the first album to receive any kind of meaningful distribution.]

varsovia :: recursos humanos
oh dear god. so. much. fun. if you play this shit in a graveyard, the dead will rise, just so they can dance. gloriously goth-tinged peruvian cold wave with an undeniable punk influence. someone must bring these people to play live in montreal. must.

da-sein :: tautology
not an album, but a 7", but still worthy of attention. the band is the latest discovery of the brilliant folks at galakthorrö, whose taste is both consistent and consistently good. veers terribly close to label stalwarts november novelet at times, but also showcases their own thrilling potential. full-length release soon to come, i hope.

[video by dfm, who is known around these parts as dom and as the man who has to deal with me even more than you do.]

but 2015 also saw a lot of artists who never disappoint release albums that... didn't disappoint.

november novelet :: the world in devotion
i was actually a little unsure of this one at first listen. now i wonder what was wrong with me. this is the best november novelet since their debut "from heaven on earth". silky smooth and icy cold and deserving of much better than either of those clichés. notable, among other things, for featuring the first official galakthorrö video ever.

grunt :: myth of blood
grunt is one of those artists where you pretty much know, within a certain range, what you're going to get. but that doesn't mean that there aren't developments from one album to another, but you know he's unlikely to go through a dub phase. that said, this is a well-done album that hits all the notes you'd expect from mikko aspa, which would really be no recognisable notes at all.

there are always a few artists who fall into my "why don't these people get more attention?" category. here are a few of them from 2015.

blitzkrieg baby :: cannibal commando
ok, to be fair, these guys aren't exactly unknown, but it seems like they should be huge within this kind of scene. fun and dark? what the hell more do you want?

terror apart :: knight rider
the first time i listened to this and was asked in which genre i would place it, i said i thought it had some elements that would appeal to fans of older industrial and witch house. apparently, comparing someone's album to witch house now is the critical equivalent of taking a dump in their crockpot while describing how you killed their parents. lesson learned. [also, no one likes witch house anymore. stupid kate.]

a better and less controversial description is probably that the talented and difficult to categorize ms. anna leja is a great candidate to be a successor to danielle dax, in her mix of sometimes catch, always strange and frequently dissonant electronics. this is her second album and if she releases a third in 2016, i promise not to attempt any comparison to a hipster genre.

lingouf :: œuvre au noir
if this thoroughly imaginative artist isn't getting the attention he deserves, it's certainly not his fault. his music is captivating, almost whimsical, original, and at times challenging. "œuvre au noir" is his eighth album in seven years for ant-zen, who aren't exactly operating out of someone's basement. stop what you are doing and listen to lingouf.

burka for everybody [bfe records]
not a band, but a label, who are releasing some of the most interesting cold wave and 80s-inspired music around. there seems to be a ridiculous talent pool with a considerable variety of sounds. your best bet is to grab the "name your price" label sampler, which has tracks from all their artists. [the sampler itself came out in 2014, but most of the albums from which the tracks are taken are from 2015.]

and now we arrive at what i'll term "the best of the best". there were two albums that jumped out at me as particularly wonderful in their own ways. both are by artists with a long history of doing very much their own thing and neither of these is any different.

jarl :: case 1959- dyatlov
an album inspired by the "dyatlov pass incident" that inspired me to write a blog post about it myself*, because the album, for all its restraint, left me shaken in a way i haven't experienced in years. as chilling as the ural mountain winds.

grim :: maha
how many artists can take a quarter-century hiatus and come back stronger than ever, stronger than almost anyone? apparently, konayaga jun, the man behind grim, can. and so he did. heavily inflected with elements of japanese music, layered with noisy electronics and propulsive, nay. groovy rhythms that weave in and out... it's a massive double album feast and every minute excites me. i salute you, sir.

believe me, i could go on. don't tempt me. but my point is that there is a lot of wonderful and strange music happening and there is no reason not to enjoy it. i have and i hope you've all found some favourites as well. i'm still knee-deep in music to review, finishing up 2015 and moving slowly into 2016.

*for those of you who noticed its absence, paranoid theory of the week will return next friday, which should just about get us back on schedule for everything here.