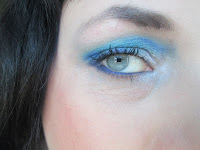 there aren't many celebrities whose passing would really move me. rather, there weren't, because we did lose one of them this month in a way that was unexpected and chilling in the story it told of the artist's strength and dedication up to his final breaths. like a lot of people from several generations, david bowie got into my musical world early. he had some of his biggest hits when i remember first hearing pop music on the radio. when my tastes took a turn for the stranger, i remember hearing bauhaus, one of my new favourite bands, covering one of his iconic songs. in high school, surrounded by friends who were more educated in the history of rock music than i, i discovered some of his older work, most notably the berlin trilogy and the ziggy stardust live album, the best live release ever in history [don't debate me on this one].

as i got older, i wasn't as moved by his new material, but i couldn't help but be impressed with his capacity to reinvent himself and to tap into the essence of whatever style he adopted. when i heard the single and saw the new video from his final album black star, that sense of awe increased again. here was a man approaching seventy who clearly still had a creative message to deliver and who could still deliver it in the most youth-obsessed industry on the planet. 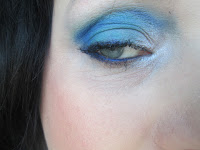 and then, in the middle of the night, when i'd already suffered a crippling panic attack over nothing, i saw a notification pop up on my phone from the guardian newspaper: david bowie dead at 69. i said the only thing word that came into my head, which was "no".

the following couple of days, it was difficult for me to even go on social media, because, of course, this was someone who had touched such a broad range of people that virtually everyone among my friends was stunned and in mourning. a friend likened it to the entire feeling hungover without having consumed a drop and that's pretty accurate.

so as a little tribute, i decided to come up with something based on one of bowie's iconic glam looks, since he was the first male rockstar to embrace the possibilities of character creation and identification through makeup, which has always been at the heart of my own fascination with cosmetics. as the title of the post says, this is inspiration not recreation. if you want to see talented artists who can literally create the looks he originated, there are dozens of them. this is just my take on one of them, with my amateur skills.

i picked out the gaudy-brilliant look from his video for "life on mars", truly one of his greatest songs and one of his most recognisable uses of colour. it's clearly focused on the incredible electric blue around the eyes, something which normally intimidates the hell out of me, but in this case i wanted to do it for david.

first of all, let's look at the original :: 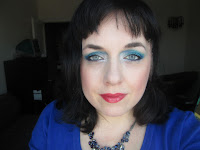 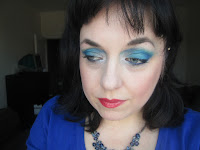 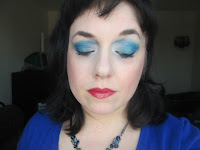 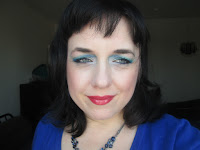 in case you're wondering, yes, i did go outside the house like this, because screw the makeup rules for women my age. i actually got several compliments, although i suspect some of that is because people reflexively give compliments when they see something very bold on a person. nevertheless, i was pretty happy with the look overall.

so goodbye to you, you wonderful, beautiful freak and thank you for all the happiness i got from your music and simply from the fact that you existed. the world is a poorer place without you.