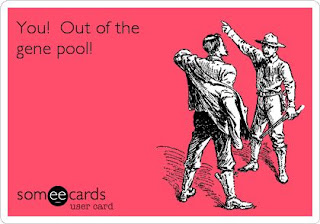 the holidays are supposed to be all about family and, since i've been exploring my own genealogy lately, i've discovered lots of things about my family that we haven't really discussed at any get-togethers. of course, chances are that i'm the only one who knows a lot of these things and even if i'm not, they're probably the last thing that anyone wants to talk about. then again, as you'll see, my family is weird, so who knows what they want to talk about deep within the recesses of their genetically programmed brain. i mean, they come from some pretty screwed up people.

so here's a short list of the pretty screwed up things that they've done to themselves and to each other. and these are just the ones from whom i'm directly descended- no idea what the distant cousins got up to.

1. got freaked out by his child and took off down the street
i think there's a tendency for people to assume that, back in the good old days, a family stuck together, not like kids today. au contraire. my great-grandfather took one look at his beautiful young family and said "screw this". the story was that he packed his bags and moved back to the town in england he came from. the truth, however, was that he moved a few doors away and everyone continued on as if he didn't have a wife and daughter. my great-grandmother eventually moved to another city entirely, possibly because it was getting awkward to explain to her daughter why she bore such a striking resemblance to the nice gentleman who always crossed the street to avoid her.

2. secretly changed the family's religion
most people would argue that a great marriage is built on communication, understanding and willingness to compromise at crucial points. my great-grandmother [not the same one] felt like it was based on nodding and smiling and doing things behind your husband's back. she had been raised a protestant, but she chose to marry a ship's master who was a catholic. at the time, that was probably the greatest transgression a person could make. seriously, if she'd brought home a black man from the wilds of africa who had converted to protestantism, her family likely would have taken it better. but apparently, she was really fond of him, even if she thought his religion was a load of hooey.

so she waited until he went out to sea for a long spell of work and, while he was gone, she stopped taking their kids to the catholic church and made them protestants instead. i'm sure that made for a lovely welcome home party for the captain. "honey, i condemned the kids to hell".

but apparently, the captain took it pretty well, because he and my great-grandmother stuck it out and, when the kids had left the home, they sailed the world together. they both lived to a ripe old age and died within two years of each other.

so, fuck communication. a successful marriage is built on a solid base of religious intolerance and subterfuge.

3. married their cousins
we already established that my mother and father are distant cousins, but if you go back further, it turns out that lots of people in my family married their cousins. there are sections of the family tree where i can now see the same two names repeating in nice columns below each other. must have made christmas gift-buying easier when the kids only had to shop for two grandparents. seriously, it's a miracle i even have fingers. the tradition of cousin-marrying is a pretty big deal in my family, including at least one happy couple who had to travel to see the pope to get special dispensation, because they were so closely related that their marriage was prohibited by church law. i don't know whether to be more disturbed about the fact that they travelled hundreds of miles to make the case for keeping family within the family, or that the pope was impressed enough that they made the trip that he told them to go ahead.

4. got excommunicated
not all my forefathers were on such great terms with the church. one of them was tossed out of the catholic church, not for marrying a cousin, but for kidnapping the wife of a rival duke. that seems like a shockingly un-religious thing for which to get excommunicated, but in the event, it didn't last, because my great-something-grandfather said sorry and was welcomed back into the fold. of course, that might have been because...

5. moved the mistress into the house while the wife was out of town
that kidnapping i mentioned? yeah, it wasn't so much a kidnapping, because the kidnapee was pretty willing. turns out that, while my great-something-grandfather was duking it out [yukyukyuk] on the field, he was also getting it on with his rival's bride. when it came time to pack up and head home, the lovers weren't too eager to be parted. so she assembled her luggage [always a key sign that you haven't been kidnapped] and took off back to her paramour's castle.

that was probably a serious blow to the ego of her husband, who had a perfectly serviceable castle of his own, but it was even more of a blow to my great-something-grandmother, who had been off on a religious pilgrimage while her husband was supposed to be at war. she returned home from said voyage a few months after her husband got home [vacations were longer back then] and discovered that there was another woman living there, schtupping her husband.

that is all i know of that story, which makes me think that whoever recorded it was a lousy storyteller, because that, if anything, was the climax of the goddamned story. but that's it. there does seem to be some evidence that my great-something-grandmother left the home to go do other things once it became clear that her rival was staying. however, none of the marriages involved ever seem to have been officially dissolved.

the takeaway from points 4 and 5 seems to be that, as far as the church is concerned, politically motivated kidnappings are forbidden, but moving your married mistress into your matrimonial bed while your wife is off praying is cool beans. 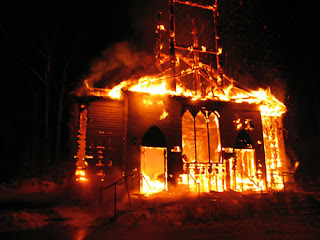 most of you won't be surprised to learn that this practice started with ancestors from sweden, because something about locking people in a burning building just screams "viking". however, it's a tradition that they seem to have passed down to what eventually became the scottish branch of the family, who distinguished decided to up the ante by locking a rival clan inside their church and setting it alight.

i feel like there's a lot of pressure on me to carry on my family's work.

if it makes you feel any better. several of my ancestors were also killed when they were locked in burning buildings, including one who abandoned his pregnant wife to go hit on another woman [meaning he did literally get burned by lust] and one guy who was burned in his home over a failed crop, à la wicker man.

7. had someone tortured as entertainment at a wedding
apparently, that was just the sort of thing he liked to do. quit ripping off my family, george r. r. martin.

8. invaded england
clearly, this is a ways back but i'm a direct descendant of several of the people who accompanied william the conqueror from normandy to the little island across the water. there are fifteen men who are considered confirmed members of william's posse and i'm descended from three of them, plus the conqueror himself. for english people, that's not especially surprising. most of us are descended from those fifteen [plus william], which means i'm not the only one who likely has a lot of consanguination [cousin-marryin'!] in my past.

but yes, several of my great-something-grandfathers headed over to the land of the angles and saxons and took it over. so the next time i see some guy waving a confederate flag and saying that it's his heritage, i'm invading and conquering his goddamned trailer.

so that's a look at my family's accomplishments. you should take a moment to appreciate the fact that i'm an only child and never had children myself, so this cesspool of genetic bad ideas ends with me. you're welcome.

happy holidays to you all as you honour your family and their traditions in whatever way you see fit.