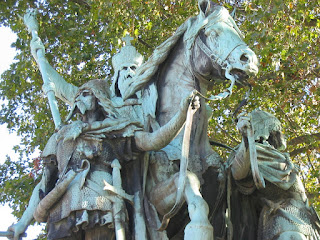 this has not been a good couple of weeks. yesterday, while terrorists prepared to attack the city of paris, people in southern lebanon were grieving their dead after bombings there injured more than two hundred in a shia-dominated suburb of beirut. the attack was condemned as "satanic" by hezbollah, the shi'ite political group who have been fighting isis and who are themselves designated a terror organisation by western powers. this just two weeks after a suspicious crash of a russian airliner in egypt killed over two hundred people there.

i already expressed my reaction to a similar attack in the french capital less than a year ago and i stand by those thoughts. but i still feel the need to say something here, because the horrific violence of the past two weeks just leaves me aching. i've been in paris. i've walked around the streets not far from the restaurant and concert venue that were attacked yesterday. i remember seeing the modern curve of the stade de france against the morning sky from the window of a taxi, one of my very first impressions of the city. i took the photo above- a statue of charlemagne- while i was there.

growing up in halifax, i always had lebanese friends, because there is a substantial community there, many who fled to escape the horrors of the civil war. years ago, i read about the resurgence of beirut since the war and was excited that i might be able to visit, before violence once again engulfed it.

two cities who have shown such incredible resilience over centuries, both targeted by zealots drunk on the teachings of an apocalyptic death cult- jim jones in arabic.

it's always been remarkable to me that, despite the language difference, there are more visitors to this blog from france than any country in the world save the united states and canada. in fact, there are weeks when visitors from france outnumber those of my home country.

a friend of mine from france told me the motto of the city of paris yesterday, which is also the title of this post: "tossed but not sunk". the city may be buffeted by waves- of violence, of fear, of anger- but it will not be dragged under. so when people say "we are all paris", it doesn't simply mean that we identify with the parisians. it means that we will not allow those waves to sink us. we will stand strong in the face of the storm. the waves will break and recede but we will not. we are not paris simply because we sympathize with the people there, but because we must be.