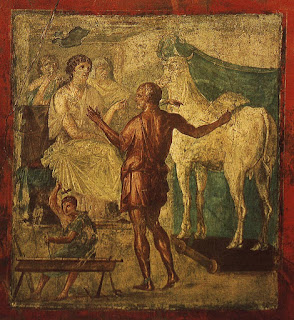 poor pasiphaë. she was a child of divinity: her father was helios, god of the sun and her mother was perse, one of the daughters of the titans oceanus and perse; her sister was circe, the enchantress who turned odysseus' men into swine; she was married to king minos of crete, himself the son of zeus and europa; she was powerful in pharmakeia, or witchcraft [also the root of a few english words, as you can probably guess], enough that when her husband proved unfaithful, she cast a spell on him that made him shoot scorpions and centipedes and wasps out his dick when he came, which is the sort of information that tends to circulate pretty quickly even in ancient crete, where weird was just what happened. but despite her illustrious lineage and enviable powers, pasiphaë is remember for only one thing: she fucked a bull.

pasiphaë did something to annoy the gods and was cursed to lust after a bull, getting so preoccupied with him that she contracted daedalus to build her a large cow outfit so that she could trick the bull into coupling with her. [i'm guessing daedalus was the sort of person who stayed alive by not asking his employers too many questions about why they needed him to build things like giant cow suits with strategic openings.] the queen of crete managed to keep her secret until nine month later when she gave birth to a bouncing baby- bovine boy. on the bottom, he was a normal human boy, but on top, he was very clearly his father's son. dubbed 'the minotaur' king minos was nice enough to build him a giant maze in which he could live and frolic and kill people, which he did until theseus of athens showed up and murdered him.

so i like to think that by naming the most exquisite part of their fall collection 'pasiphaë', nars is trying to remind us that she was regal and magical and that she had a full and fascinating life, that amount to way more than that one time she got a little carried away with a crush...

her eponymous eye shadow is one of the wet/ dry 'dual intensity' ones that nars introduced last year, but that i haven't tried until this very moment. i always thought that they looked a little on the scary side of frosty, which tends to be problematic for those of us who are a few steps beyond the first flush of youth. [although, in my defense, the skin on my eyelids has never been nice and smooth... now i'm depressed.] there's also the issue that i really don't like applying wet things to my eyes, which is why i don't tend to go for a lot of cream or liquid shadows either. that said everything is apparently becoming wet/ dry these days, so i guess i'm either going to have to get used to wetting myself [so to speak] or paying more money for a product function i don't use.

one thing that did irk me, though: i was always told that nars shadows could be used damp anyway. i know i've used a few of mine that way to build intensity and there's been no problems. the formula on these new shadows is clearly very different, with a metallic shine that looks like it would be visible from space, but if the thing that makes them special, that makes them worth paying more money for less product [with bulkier packaging], is that they can be used wet and dry, that seems a little fishy.

the dual intensity formula is very smooth, very easy to apply and very easy to blend. i needed very little to get nearly opaque coverage. applied damp... i really didn't notice much difference. it's a little darker, but it wasn't more than you'd get from just applying the colour a little heavier. unlike the new burberry wet/ dry formula, i was able to see the [small] difference for as long as i had the colour on [say about seven hours]. i did noticing slight, but not significant creasing by the end of the day, by which i meant that if i looked down and leaned in towards the mirror, i could see it, but at a normal viewing distance, i don't think it would have been noticeable. on a warmer day, i'd expect this might be worse, but i guess that's why it's in a fall collection, right? i'd also guess that creasing would be an issue for women, like me, who have hooded eyes.

the colour of pasiphaë really does echo the magical powers of the woman for whom it's named. it has a rich red-brown base, earthy and, yes, just possibly reminiscent of the roan hide of a prize bull. sigh. overlaid on this is an eerie green, touched with gold, but an almost glowing, very unnatural shade of green, that can be either subtle or intense depending on the angle of the light. [but not on whether it's applied wet or dry. it's about the same both ways.]

there are a lot of shades that have tried the combination of a red-brown base with a green shift. the earliest, i believe, was urban decay's "lounge", which i used to have, but ultimately parted with because the base was too red to work on my complexion. probably the most popular version is mac "club", which i do own, which is darker and has a subtler green sheen. what makes "pasiphaë" stand out is the fact that the layering of the colours remains visible, even after a number of hours of wear, so if this surprisingly popular colour combination appeals to you, this is definitely the one that i'd recommend.

i bought this pretty much knowing that it was going to be a difficult colour[s] for me to pull off. both the maroon base and the acidic lime green sheen would work best on warmer complexions, but there comes a point where i just think that something is just so beautiful that i figure i'll just be able to make it work somehow, even if it isn't perfect.

to test the wet/ dry use, i applied it all over the lid dry and then dampened the colour to make it more intense in the crease. the sort of worked, but really, it just looks like i applied the colour all over the lid and into the crease, while i used mac "ochre style" to soften it above the crease and mac "dazzlelight" to highlight along the brow bone. there's also urban decay eyeliner in "demolition" [my favourite dark brown] and guerlain cils d'enfer on the eyes. 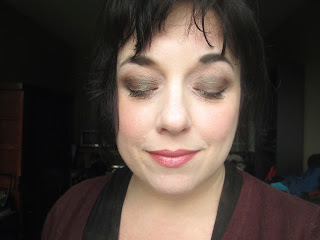 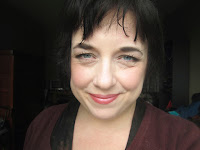 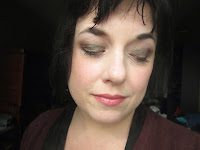 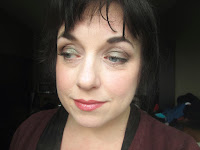 paired with the eye look, i figured that i'd keep things on a nars tip, so i used "sin" blush and "rikugien" satin lip pencil. the idea was to keep things subtle, because "pasiphaë" commands such attention on its own that you don't want to overdo it.

even though this is a colour combination that's been done before, i'll repeat that pasiphaë does it better than any of the examples i've seen. the warm, rich base and and the eerie sheen are both visible at all times, which is what you want when you invest in a shade like this. the formula is very pigmented and performs well. whether that justifies a $36cad price [as opposed to $28 for a regular nars shadow] is a personal decision, but the mesmerising dual colour of this one makes me inclined to say that this would be the one to go with if you want something really special for the extra investment. also, if you want to grab something from the nars fall collection and haven't already, this would definitely be my recommendation.

the illustration at the top is from the frescoes of pompeii and shows pasiphaë, daedalus and the child labour he evidently employed to create her cow outfit. and in case it needs to be repeated, unless it's what you want to be remembered for, don't fuck a bull.