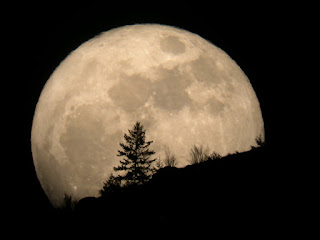 ahoy there fellow fans of autumn! the season is officially upon us! if you're a lover of all things fall, as i am, today is the day when you can officially start feeling like the world is on your side. unless you live in the southern hemisphere, in which case you're only going to feel excited if spring is your favourite season, but the whole shift in seasons thing doesn't really work the same way in the southern hemisphere anyway, or at least the differences aren't quite as stark. wherever you live, though, it's equinox time!

in honour of the celestial occurrence, i thought it would be fun to look at some autumnal equinox traditions from around the world, or at least the northern half of it.

whereas the solstices represent apexes- the pinnacle of light and dark- equinoxes are points of balance. if you're an astrologer, that's reinforced at the autumnal equinox, as the zodiac shifts to the sign of libra [the scales, or in french balance]. on the day of the equinox, the hours of daylight and darkness are exactly even [or as even as you can get on a planetary scale]. celestial events of this sort are obvious and important enough that people have been noting them for thousands of years, long before they acquired religious or cultural associations.

the vernal equinox is replete with celebrations to its name, because it was obviously a happy time: the sun was coming back and if you could see it, it meant that you'd survived another winter and that there would be more food around and you could go outside again. the autumnal equinox wasn't quite such a happy occasion, since it was more a time when people were thinking about getting all their crops harvested and properly stored so that they didn't die during the winter, and it being dark most of the time was a significant impediment to doing things, rather than an invitation to flash up the lights and party.

however, there are a few autumnal equinox traditions that took hold...

michaelmas :: alternately known as the feast of saints michael, gabriel, uriel and raphael, the feast of archangels or the feast of saint michael and all the angels. [emphasis mine, but i kind of like saying it that way, like god got fed up and finally just said the day could be for everybody as long as they just shut up.] rather than being strictly tethered to the equinox, michaelmas falls every year on the 29th of september. the celebration is to honour the dedication of a church to the archangel michael on september 30th in rome some time in the fifth century. in 1752, festivities of michaelmas in britain were moved forward to october 10th [or 11th, or both, depending on your source], which is now referred to as "old michaelmas". yes, the newer date is now called "old", because at some point they switched back. there is a superstitious belief that you shouldn't eat blackberries after that date, because it was the date that lucifer was cast out of heaven [by the archangel michael]. apparently, mephistopheles' landed on a blackberry bush and cursed them. [blackberry bushes are thorny, so i can understand where the cursing would come from.] in certain areas, it gets a little more specific: if you're in yorkshire, the legend is that he spat on the blackberries. if you're in cornwall, he peed on them. i'm not sure about the superhuman powers of satan's spit or piss, but i fail to see how one dose could have spoiled all the blackberries in the world, or why they'd be fine the whole season up until the anniversary of the luciferian loogie, but gross afterward. also, i have seen where wild blackberries grow and i know that you'd be unlikely to find some that hadn't been peed on by something, which is why you wash produce before you eat it. maybe it's something you have to be catholic to understand. [side note :: roman catholic. the greek, eastern and russian orthodox churches don't do michaelmas, although the serbian orthodox church does. the greek orthodox church does have a day for the angels, but they celebrate it on november 8th, when the romans have moved on to saints and souls. you're lucky to get protestants to celebrate anything other than christmas and easter, but the michaelmas tradition is observed by lutherans and it was kept, like pretty much everything from catholicism, by the anglican church when it split from rome. there is a lot of disparity between which archangels are honoured on the day, since everyone has their own ideas about who the archangels are. anglicans and protestants have either three or four: michael, gabriel raphael and sometimes uriel, who is like the "y" of archangels. going by the book- literally- the only archangel in the bible is michael.] 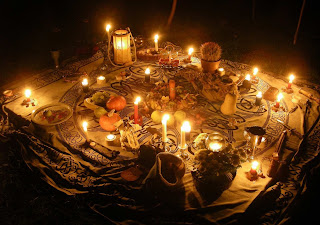 mabon :: currently a holiday in the pagan/ wiccan calendar, there is some historical precedent for a harvest festival that coincided with the equinox. it was also sort of a practical festival, when accounts would be settled, e.g., field workers being paid for the harvest, landlords being paid for quarterly rent, etc. it's the second of the pagan harvest festivals, falling between lammas/ lughnasadh at the beginning of august and samhain at the end of october. certain pagan groups consider it a lesser holiday [alongside the vernal equinox and the two solstices], as opposed to the greater holidays at the beginning of february, may, august and november [well, end of october]. given the longstanding importance of celestial shifts in the position of the earth relative to the sun, it seems pretty likely that the solstice traditions are older than the christian ones. which would make michaelmas one of many christian days that got made up in order to ease the transition from paganism to christianity. "you celebrate around the last week in september? that's so amazing, because we have a celebration at exactly the same time! so you could be a christian and you'd get to keep that holiday, as long as you gave some money to the church at the same time!" 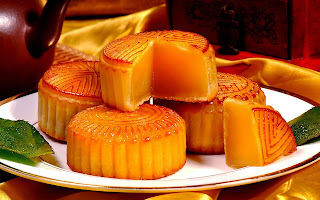 moon festival :: the exact timing of this is a little harder to reckon for westerners, because it works on the lunar calendar, but the easiest way to figure it out is that it falls on the full moon following the equinox. this year, it'll happen on sunday, september 27th. the moon festival is observed in china and vietnam and a similar festival is observed in korea. officially, it commemorates the flight of the goddess chang'e to the moon, where she lives and sometimes dances. unofficially, it is a time for families to come together, to share seasonal treats like moon cakes [which are delicious no matter where you're from], sing songs or read moon-inspired poetry and to watch the rising of the full moon together. it's also considered a promising season for romance, even for lovers who are separated, because they can watch the ascent of the moon and know that they are experiencing it together. [side note :: this year's full moon is going to be pretty epic. in a rare conjunction of events, the full moon coincides with the perigee of the moon, or the point at which it comes closest to the earth. this combination will mean that there are likely to be record high tides, particularly in the bay of fundy, between new brunswick and nova scotia, which already sees the highest tides in the world. and if that's not enough, we're also in for a total lunar eclipse the same night.]

back to school :: sure, it happened weeks ago, but have you ever wondered why you go back to school in september? it's because school terms originally started at the equinox, after the children had helped out with the farm all summer. in other words, summer "vacation" used to suck.

hutash :: the chumash people of southern california [although the people predate the state by more than ten thousand years] observe a holiday to celebrate the harvest, named in honour of their earth goddess figure. it's also a time when members of the tribe come together and give small gifts to their chiefs, to symbolise the renewal of social and political relations.

even if you're not a religious or spiritual person, there's no getting around the significance of this shift. it's going to be darker, and cooler. the leaves are going to change and fall and after that, depending on where you live, you might be living under a blanket of snow for several months. today marks a perfect balance everywhere in the world between light and dark and we're as close as we can get to another celestial body. those are big things, fully science and magic, that are happening and i can't think of a better reason to pause for a moment and get out of the day to day headspace. so celebrate in whatever way suits you best.