mental health mondays :: well it was working before 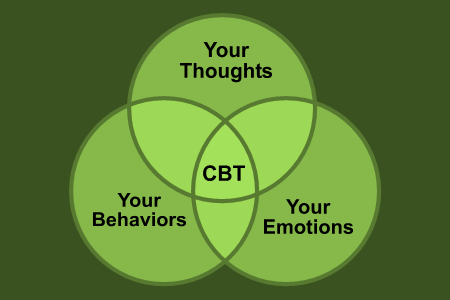 we've talked a lot about drugs here on mhm, but we haven't paid a lot of attention to the different types of therapy that are available for people with mental disorders. that's a hell of an oversight on my part, because, as most experts in the field will tell you, it's the therapy that's more important. drugs control the symptoms, but they aren't doing anything [as far as science has been able to uncover] to improve the underlying condition. psychotherapy is like physiotherapy for the brain: it doesn't undo the damage, but it teaches you how to function in spite of it in such a way that you won't cause additional damage.

one of the most popular forms of therapy in the last forty or so years- popular with both doctors and patients- has been cognitive behavioural therapy. it's easy to see the appeal of it, because it's short-term, goal oriented and something that, once the therapy sessions have ended, you can continue to practice yourself. it's not just an interaction with an expert, but a way of retraining your brain. there is an in-depth description of the process that you can read right here, but the short version is that it represents a significant departure from the open, discussion-based approach of classical psychoanalysis and places both the onus to improve and the power to effect improvement on the patient, with the therapist playing the role of a coach.

when the practice first became popular in the 70s, it was a revolution. by the 80s and 90s, people were already mocking it [remember the "baby steps" mantra from what about bob? or the emphasis on finding one's "happy place" [a trigger for a state where one can ignore the chaos of the surrounding world and focus on what one's brain is doing], like in the simpsons episode where edna krabappel tries to overcome stress by repeating "calm blue ocean". the mocking, however, was lighthearted, because it was clear that people who were engaged in cognitive behavioural therapy were seeing real benefits, even if the "homework" did seem a little silly at times.

but a recent study- actually an analysis of a number of studies- casts some doubt on whether it continues to be a cure for the disordered brain. after reviewing forty years worth of evidence on its effects, the researchers have come to an inevitable conclusion: cbt's ability to cure people of unipolar depression [the studies were specifically related to this, although cbt is recommended for a wide variety of conditions] has been falling steadily the entire time. its greatest results came when it was first studied in the mid-to-late seventies and everything else has gone downhill. so what's going on?

the paper hints that there may be a sort of placebo effect at work, where people assumed that it was helping more than it actually was because it was just so different and because some progress could be measured. likewise, once word started to get around that this was a sort of miracle cure for brain bugs, the expectations rose as to what it was going to accomplish, expectations that couldn't be fulfilled. that would explain the initial drop, but not the continued decline. at some point, the treatment was no longer novel and expectations were no longer too high, at which point the rate of effectiveness should have stabilised. and yet it continues to go down.

an article about the study in the guardian raises an interesting possibility: that it's not about individuals and their reactions to a particular type of therapy, but rather about shifts in culture as a whole requiring new types of therapy every so often. in the same way that freudian analysis fell by the wayside, so to cognitive behavioural therapy has run its course. it isn't that cbt is bad therapy, it's that it's served its purpose and it's time for a new model. [it also mentions the very obvious possibility that there are just more therapists who are under-qualified, which is something that shouldn't be discounted.]

this isn't like with medication, where, as scientists get to know more about the chemistry of the brain, they're better able to target drugs to promote or suppress certain reactions. finding forms of therapy that work better than others is based on observation and intuition. the results are still measurable, but it's a lot more haphazard and takes a lot of work to refine. that said, once a good system is established, it follows that it should continue to be useful over time. we can't build up an immunity to therapy, can we? well, not in theory, but that's exactly what seems to be happening. more intriguing, it's happening on a societal rather than an individual level. the cbt process isn't just becoming less effective on individual patients, but on everybody.

the implications of that are worthy of study themselves. it's like we, as a society, react to psychotherapy in the same way a teenager [or an adult, who am i kidding] reacts to a new video game. at first, it's interesting and makes you want to push further, then it's all you can talk about, but then you figure out what's happening and it no longer has its magic. it's possible that, as more and more information has been revealed, cbt seems too "easy" to be a solution to what we perceive as complex problems.

the results of this study shouldn't be cause for immediate alarm. cognitive behavioural therapy continues to help people fight their psychological demons, identify the ways in which they compromise and harm themselves, and empowers them to take control over their lives. no one is trying to assert that their progress isn't real. but it does raise the question of what form new therapies need to take. we've gone from the value of talk to the value of goals and action, so what's the next step in the ladder? [you didn't think that i was going to answer that, did you?]