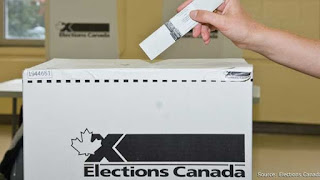 this post is specifically focused on the upcoming canadian election. october 19, canadians go to the polls [at least they should] to elect a new government. [i say "new" because even if the same party gets elected, the allocation of seats is going to change, which will make it different. i'm not making any assumptions and neither should you.] there are many issues the country is facing right now and mental health isn't one that will get a lot of attention. i'm not angry about that, because it's not a primary concern for most people, but that doesn't mean that it should completely fall by the wayside. to that end, i've developed a list of questions that interested people may want to ask of the candidates in their riding. if they are canvassing for your vote, they should be able to answer some basic questions on an issue that's of importance to you.

before we move onto the questions, though, i thought it would be helpful to mention what's actually included in each party's platform. as you might guess, it's not much and no one was as surprised as i to discover that one of the parties specifically mentions mental health as a priority within their platform. but here is the current stance of each of the three parties expected to have a shot at forming a federal government, along with the emergent green party and the regionally focused bloc quebecois.

bloc quebecois :: no mention of specific health priorities at all, let alone mental health, but the party does promise to demand an additional $3.3 billion from the federal government to improve healthcare. it's important to note that the bloc believe that many powers of the federal government should be devolved to the provinces.

conservative party :: so you're aware, this is not an election-specific platform, but a policy document for the party as a whole. i couldn't actually find an election policy document, which isn't all that odd for a party in power, because they're running on their record as much as anything. that said, the party policy is frustratingly vague about anything. that's not unexpected, since it's supposed to be flexible, but it doesn't tell you much about their specific plans. there is an emphasis on auditing medicare and ensuring that the services are delivered in a financially responsible and effective way. one potentially interesting note is that the party is committed to offering freedom of choice for natural health products, many of which purport to have benefits for mental health. [side note :: it might surprise some people to know that the conservative party also opposes any legislation that would restrict access to abortion.]

green party :: unsurprisingly, the party has a strong commitment to health care. there is no specific mention of mental health, but they do confirm a commitment to a national pharmacare program, which would reduce the cost of all medications, as well as to offering incentives designed to encourage people to take a proactive approach to their health. they also promise to be far more rigourous in assessing which drugs will be made available in the canadian market.

liberal party :: um... i looked through their plan and i couldn't find anything related to health in general, let alone mental health. there are some plans specific to seniors, which is what turned up when i searched for "health". it's possible that i missed something, although i did honestly try several methods. if there is something there, i'm happy to edit this post with the updated information.

new democratic party :: the sole party to mention mental health in their policy document, the ndp promises a new "innovation fund" designed to improve care and decrease wait times. the party is also committed to a national drug program, hiring more doctors and nurses and establishing a network of community health care centres and launching a plan to address alzheimer's and dementia [a serious issue in an aging population].

now that you know roughly where each of the parties stand, here's a few questions that you can pose to anyone calling on behalf of a political party, or any candidate who comes to your door to ask for your vote. the idea is to reinforce that there is a need for a national strategy on mental health, so don't immediately dismiss someone who can't answer these questions off the top of their head. ask that they get back to you, which they should be capable of doing.

patients with serious mental disorders are disproportionately poor, but often require more types of medication or higher dosages of medication than others. what will your party do to ensure that these people are able to afford their prescriptions, including meeting the needs of those who are homeless?
treatment for mental disorders is understood to be a twofold process: medication to control symptoms and therapy to address root causes and assist patients in dealing with their disorder on a daily basis. although drugs are generally covered [at least partially] by public and private health care plans, coverage for therapy is extremely limited. what will your party do to ensure ongoing accessibility to both forms of care?
the impact of mental health issues for canadian business is well into the billions of dollars, with billions of dollars more billed to public health care programs as a result of common disorders in the workplace. what will your party do in order to incentivize employers to be proactive in addressing mental health concerns, implementing measures to stop this costly problem before it develops?
canada has an aging population, which means that age-related ailments such as alzheimer's and dementia will increase substantially in the coming years. what is your party's plan to accommodate the inevitable demand on the health care system?
what is your party's plan to expand support for those living with and caring for a person with a mental disorder?

there are many more questions, of course, but those are going to give you a pretty good idea of where your candidates stand on the issues. once you know, give it some serious consideration when deciding who is to get your vote.

don't forget to confirm that you're registered to vote! also, if you or someone you know is mobility impaired, most political parties will happily offer their supporters assistance in getting to the voting booth on election day.