mental health mondays :: i'm sick and my cats will never be schizophrenic

June 15, 2015
i've somehow managed to come down with a horrific cold/ flu/ cough/ end times plague, which means that my brain isn't functioning well enough to think about brain function. i thought of running a repeat mhm today, but then i found this fabulous article:
http://www.scientificamerican.com/article/why-don-t-animals-get-schizophrenia-and-how-come-we-do/
[in case you were wondering how sick i am, i'm too sick to sit in front of the computer where i could have put that in a nice embedded link like a human being in this century.]
basically, i got to wondering about animals and mental illness. it's been established that many animals feel undue anxiety. animals in captivity exhibit all sorts of anxiety spectrum disorders. and they can become depressed as well. they can develop addictions [we study them to learn about our own addictions]. but i didn't ever recall seeing a study  about animals and schizophrenia.
so i did what any first-worlder would do and googled "do animals get schizophrenia?"
it turns out that, no, they don't. and the fact that they don't might tell us something about how schizophrenia works. we know that it's a heritable condition, which means that its secrets are buried in our genes. in fact, it seems linked to all the other genes that make us the very special kind of animals we are. the things that make us human- speech, for instance- seem closely linked to the things that make us schizophrenic.
so if you've ever wished that your furry [or scaly] companion could speak to you, you've really been wishing that they could develop paranoid schizophrenia, you monster. 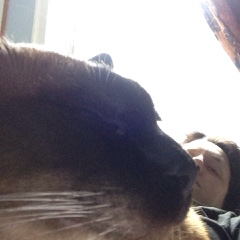 p.s. :: he sat on me for hours like that, despite the fact that my coughing must have felt like an earthquake. that's the sweetest kind of crazy ever.
Reactions: